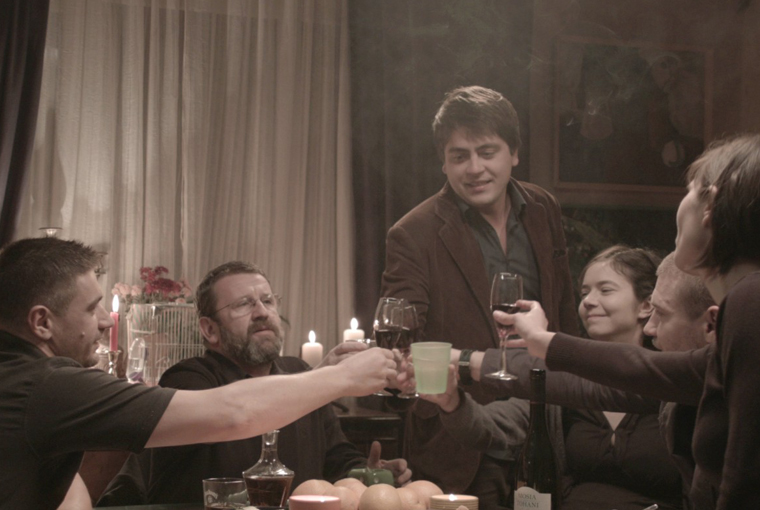 Time is God’s instrument, or time might even be God himself” says Victor (Adrian Titieni), the father of four grown-up children during a conversation at the dinner table. With this philosophically heavy statement, Adrian Sitaru introduces us to his new film Illegitimate, which invites us to observe the intimacy of a wonderfully acted love story bound to challenge our thoughts on family, morality, and time.

Time is indeed a sort of God for Romanian cinema these days. In Metabolism, Corneliu Porumboiu already pondered over the limits of 35mm film to capture a sequence over 11 minutes without cutting, and one scene is rehearsed over and over again. How much time is needed for a scene to imitate life? Adrian Sitaru’s answer: one. And his result is just as fine. Based on a series of unscripted, improvised scenes, no take seems to be as authentic as the first. While Sitaru’s small digital camera struggles to capture the “moment” before it is forever gone, his film is a persuasive contribution to Romania’s late obsession with meta-realism. Once again, this film is really about what it means to make a realist film in the first place.

During a family reunion, Victor’s children blame their father for being a former informer when they find out that he was one of the doctors that opposed abortion during Ceausescu’s regime. For his young daughter Sasha (Alina Grigore), depriving people of their right to abortion is illegitimate. What’s worse, their father was never brave enough to tell them about his past. The revelation turns into a nightmarish family fight that gets a morally complicated twist when Victor admits that his two twins, Sasha and Romeo (Robi Urs), only exist because he convinced the mother not to abort them. Sasha also struggles with the moral dilemma of abortion in her own life. (Spoiler: Sasha turns out to be pregnant by her own twin brother who insists on her keeping the child and vindicating their true love in Romania’s traditionalist society). Family power and control issues are unmasked, unavoidably recalling Calin Peter Netzer’s Child’s Pose (2013), another Romanian Berlinale contestant.

Sitaru’s elliptic montage captivates the viewer all throughout the film and reflects the intricate relationship between the characters. Who is whose partner? Where is the mother? Do they live together? Enigmatic dialogues and only partially explained reactions make one want to have control over the characters in the same way they want to have control over each other. The breathtaking fight between Victor and his children in the first scene quickly reveals family pathology as the film’s dominant theme. However, the difficulty of communication between the different generations and the complexity, not to say fragility, of moral values makes it difficult to draw overhasty conclusions. How coherent is Sasha’s criticism of her father, for instance, regarding her own choices in life?

A few seconds of black separate the film from its epilogue, which adopts a surprisingly different style. Some time has elapsed, and the family again sits at the table, though under circumstances that appear less realistic. The sympathetic, philosophical voice-over of the father is either implausibly diplomatic or yet another meta-commentary on happy endings in cinema. Perhaps a consciously open ending would have been more realistic. Nevertheless, Sitaru’s fresh work makes this film not only stand out among the director’s own filmography, but can be seen as a valuable and thought-provoking contribution to Romanian cinema, which at this point is simply unmatched in its choice both of subject and stylistic ambitions.