How to Disappear Gracefully 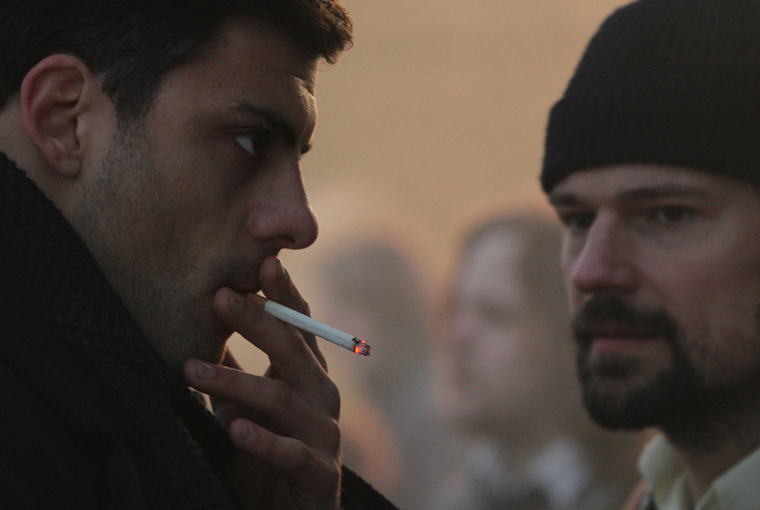 Dovlatov is a free-style biographic narration of five days in the life of the Russian writer Sergei Dovlatov. The film takes place during the post-Thaw Soviet Union sometime in the 1970s, which was not a particularly good time for artists. Then, of course, they have never been great, and it would be fair to say that the movie adds strictly nothing to our understanding of artists in totalitarian states nor to the particular case of Dovlatov, which, in the film, is quite indistinguishable from that of any other member of the writing intelligentsia of this period.

What distinguishes Dovlatov is that he was probably more talented than his peers and so had finally become a renowned writer, even though completely in absentia, after his death and long after having emigrated to the United States.

That – the tragic impossibility for an artist in the Soviet regime to establish a creative or intellectual existence on the territory of his or her Motherland – seems to be the main theme of the film. The starting assertion, “If you’re not a member of The Union of Soviet Writers, you don’t exist” – sets the tone for the whole picture.

And so the film is a depiction of the growing feeling of the main character: that of his own disappearance. First he tells everyone he’s writing a novel, then that he’s writing for a journal, and finally, when questioned about what he’s doing, he answers “going crazy”. His craziness is sustained by thoughts of becoming a pipe layer and by dreams in which he renounces writing altogether to return to his military service as a prison guard.

The disappearance, or rather the slow dissolution of a personality in this atmosphere of stagnation that would correspond to what Mandelstam called a “half-spasmed existence”1 is rendered in the movie by well-known landmarks of the German Jr. style: masses of people going in and out of the frame, indistinct talking on all sides and all at once, gestures and lines going nowhere as if suspended in the air, and this voice-over, as if deliberately imprecise to give the impression of actors being puppets, having no voices of their own.

The downward movement of a “young and promising” writer who comes to apprehend that he cannot fulfill the demands of the Socialist market to produce “bright and positive” writing goes hand in hand with the realization that there is no other market, no other way to exist as a writer, as himself.

The theme of “non-existence” is so insistently recurrent in the film that it starts to resemble the nagging of a grumpy old man, a kind of plaintive apology for existential failures, with all the blame directed, sure enough, towards the Soviet government. Here is an example of Dovlatov’s reasoning in the film: “I was thinking that our books or paintings get banned or censored only because what we talk about doesn’t exist. In life it exists, of course. And nevertheless, the authorities pretend it doesn’t.”

Even if there’s nothing wrong with this statement, it doesn’t sound like a writer’s speech, but more like the words of a third-rate social critic spitting platitudes across the border. If you compare it with Dovlatov’s actual reflections on Soviet life and on the nature of Soviet power, expressed during his work on American radio (available on YouTube), you’ll be surprised by their profundity and lack of cheap spite.2

“You know how much courage it takes to be no one and to remain yourself?” says one of Dovlatov’s girlfriends in the film, trying to cheer him up. Here, once again, the two of them are confronted by the impossible junction of “being someone in Soviet Union” and “being yourself”, which is, all in all, not a bad formula for the whole artist-in-totalitarian-state position: it is a position of being true by being absent. In the “worker’s state” where all work is a state-work, and the state is predominantly repressive towards art, no legal social existence is possible for an artist.

So, in German’s film, it is not a question of courage anymore, but that of a way of reappropriating one’s existence without losing one’s self (which is what happens when a writer starts thinking of being a pipe layer to get his piece of life back). It is clear that for the director no response is better suited than emigration. It is as if German Jr. had been citing Kafka, who famously compared the courage of people who wouldn’t leave the country where they’re not needed to that of cockroaches that are impossible to get out of the bathroom.3 In the film, this aspect is specifically (and superficially) highlighted by subtitled biographical notes on two central male characters – Joseph Brodsky and Sergei Dovlatov, – who had acquired the status of “great Russian writers” even though both had emigrated to the US quite early. The director’s view on their immigration is sober and definite: it was an unfortunate necessity.

Is that all? Yes, and it is surely neither a very interesting nor an original conclusion. The film is actually nothing but a broad and boring account of why artists had no place in the Soviet Union. The dialogues are badly written, Dovlatov is vulgarized through cliché problems of a writer. When someone asks him “Why is your hand swollen?”, Dovlatov answers “I was just up all night, trying to write”. The real Dovlatov, with his sense of humor and disdain for all things phony, would’ve probably replied: “I had a fight over Vvedensky’s poetry”.

The staged, superficial and somehow caustic character of German’s movie can be guessed at first glance, when the credits read that this film about a counter-culture writer is produced by Channel One Russia – the main government television channel stuffing Russians with pro-Putin propaganda day and night. It is not surprising that none other than Netflix has bought the distribution rights in the US, thus importing a good artificial palliative for any stirs of consciousness in the Russian émigré community there.