Such a Lovely Place 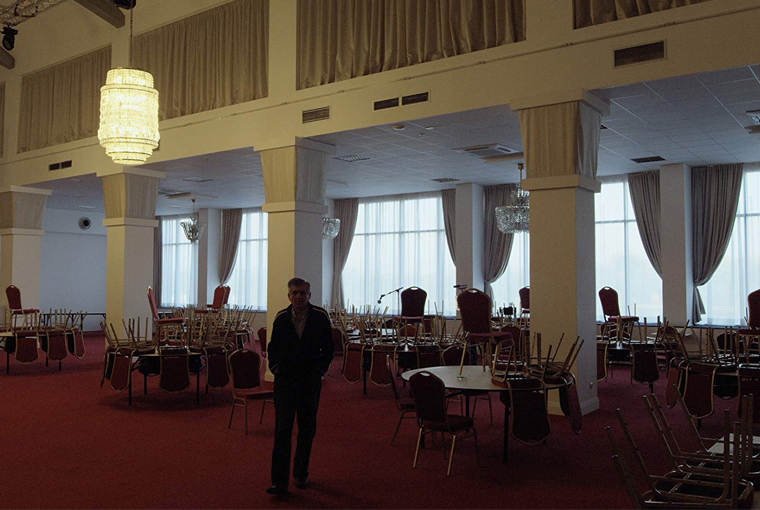 Part love letter, part essay film, part architecture porn, Nicolas Wagnières’ Hotel Jugoslavija charts the concomitant rise and fall of the eponymous building in Belgrade and the country from which it takes its name. Lingering shots lovingly explore the rooms at different points in time over the course of a ten-year shooting period, showing the hotel in its corresponding fluctuating stages of construction and reconstruction. Combining interviews with former employees and other relevant figures and various types of archive footage, the director leads us through the Brutalist behemoth’s history. Starting from its ideological and idealistic conception in the 1960s, it goes on to face the tribulations of half-assed privatization, near destruction during the NATO bombings and numerous failed attempts at reappropriation. In parallel to this, its occupants descend from the likes of dignitaries and luminaries to gangsters and war criminals, and it even ends up as something of a headquarters for the notorious warlord Željko Ražnatović (“Arkan”).

Given these poignant milestones in the hotel’s evolution, the analogy with the history of its country of origin is only too neat at times, running the risk of over-simplification. Although the film only scratches the surface in terms of its historical analysis, one of the primary ways that Wagnières succeeds in avoiding the potential for banality is by fully embracing the subjectivity of his own perspective – also an approach that could have ended in clumsiness or navel gazing, but which he instead manages to handle deftly. By means of his first person voice-over, he reminisces about his childhood summers spent traveling through the Balkans with his Serbian mother from his native Switzerland, and his compulsion to reconnect with this part of his identity as an adult. He even includes his mother among his interviewees, positioning her among the crumbling hallways as she recalls her youthful exuberance for Tito’s Socialist project and the contribution her and her peers willingly made to help shape the emerging state.

One of the crucial themes framing the director’s investigation is his own sense of Yugonostalgia, which he not only openly acknowledges but thoroughly problematizes. It is clear that his passion for the hotel and the era of Tito’s rule are intertwined, and his attempts to salvage, or at least cinematically preserve, the original aesthetics and atmosphere of the hotel seem in some ways to be attempts to cling on to a rose-tinted vision of what Yugoslavia was. Yet what right does he, to all intents and purposes a foreigner, have to mourn the loss of a socio-political context he never really experienced? He openly acknowledges this in his narration, and also poses these questions directly to the interviewees, to provide a counter perspective and add more nuance to the discussion. By foregrounding this aspect, he both introduces an important element of self-reflexivity while also touching on a poignant issue that will continue to affect the Balkans for the foreseeable future yet is rarely addressed in the wider international context.

The whimsical use of archives also adds an extra layer to the portrait of the hotel, by including a meta-discourse on how it was perceived by the outside world. Starting from the original promotional videos presenting the building as some sort of harmoniously designed gathering place for the world’s elite, it moves on to Jovan Jovanović’s 1970s subversive Black Wave classic Young and Healthy as a Rose, which sees the place overrun by beatniks indulging in violence, drugs and orgies. Finally, epitomizing the degradation of both the image of Serbia and the building itself is its use as a backdrop to Luc Besson’s Three Days to Kill with Kevin Costner, which sees the Hotel Jugoslavija blown up once again in a blaze of unconvincing CGI flames at the hands of the CIA.

The film ends fairly pessimistically, but inevitably, with the once grand structure in its current incarnation as a gaudy casino, rounding off the Yugoslavia/Jugoslavija analogy with an allegorical image of Serbia’s uneasy relationship with Late Capitalism. It refrains from offering any predications or solutions, choosing instead to continue with its simple and subjective musing. Cleanly made with some beautiful images, it maintains a suitably poetic, reflective pace without ever becoming uninteresting. Moreover, it allows the inherent, if not unproblematic, charm of the building to shine through thanks to the genuine affection of both the director and interviewees, appeasing the architecture-obsessed viewers while also providing curious enough first-hand insights to keep the attention of those less appreciative of the aesthetic possibilities of cement.