Blue is a Volatile Color 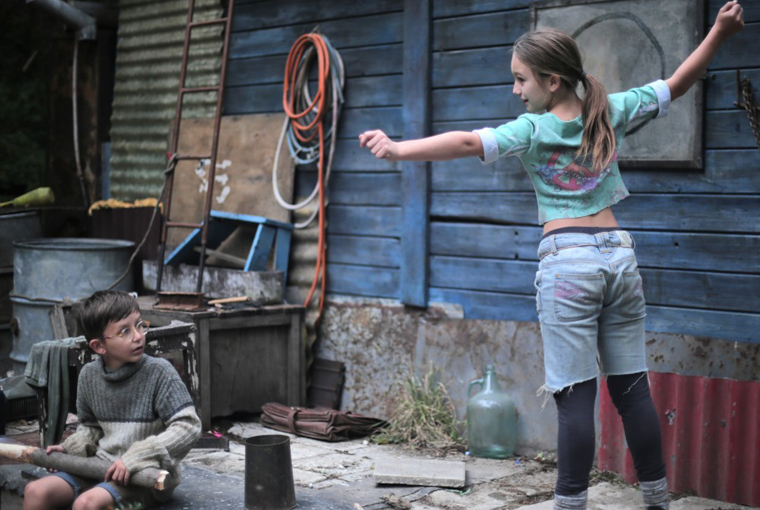 Slovak filmmaker Iveta Grófová studied documentary and animated film before releasing her debut Made in Ash in 2012. Last year her latest work Little Harbour was released, which continues to gain attention around Europe.

Told from the perspective of a 10-year old girl, Little Harbour is a film that is limited in its representation of a complex story. The young heroine Jarka inadvertently kidnaps two young twins in an attempt to save them from the maternal rejection and neglect that she herself experienced growing up. It is often the film’s most simple elements that lead to deeper reflection and a greater understanding of the seemingly stereotypical social drama that unfolds. The battle between urbanism and nature, the prominent and repetitive use of color and the mix of fantasy and realism should not be dismissed as cliché. Instead they are the tools that have helped create a film that captured the imaginations of the 2017 Berlinale children’s jury and continues to impress a variety of audiences across the 2018 festival circuit.

If Little Harbour were to be described in one word, it would be ‘blue’. Blue skies, blue water and blue objects infiltrate almost every scene to the point that the color becomes a dominant element of the narrative. It sets the underlying tone of the film as its brightness reflects the vitality of youth while its deeper shades reinforce the melancholy of growing up and tackling the adult world. It is a straightforward message, conveyed in a straightforward way that suits the childlike narration of the story. The insistent repetition of this color in many shades and scenarios however, points to hidden layers and deeper meaning. Blue can symbolize trust, stability, honesty, or health, but it is also a cold color that can cool the heat of passion and judgment in favor of reason and understanding. For Grófová it seems to do just that, as the blue sky that hangs over all the different characters alike, oscillates through shades of light and dark as if to say that there is no such thing as one or the other. In this way, a tone of acceptance and understanding is promoted over one of blame and moralization.

Despite this, the atmosphere becomes considerably more tense and emotional when Jarka’s mother Lucia is around. In the opening scenes, she bolts out the door to go swimming when Jarka has been waiting all morning for her. Following a family tragedy, Lucia makes the bizarre decision to go and top up her tan, dragging Jarka with her. During a party at their flat, Lucia locks Jarka out of the apartment with little concern. The single-mother is quite deliberately portrayed as superficial and could easily be dismissed as uncaring, in comparison with her sweet innocent daughter. However, too many things are mirrored between the two for an interpretation of good vs. evil. For instance, Jarka mimics Lucia’s premature motherhood when she runs away with the twins. And while Lucia is desperately chasing her youth, Jarka desperately seeks maturity. Lucia abandons everything in the belief that winning a singing competition could solve her problems, while Jarka puts the two babies in danger in the hope of healing the emotional wounds inflicted by her mother. Indeed, Jarka’s behavior is considerably less selfish than that of her mother but Lucia is offered a second chance when Jarka hands motherhood back over to her when she leaves one of the babies in her care at the end of the film.

This notion of a fresh start ties in with the departure of the matriarch of Jarka’s family, her grandmother Irena. While Lucia displays strong connections with the urban surroundings of the film, Irena is undeniably linked with the natural scenery. Her apartment is sprawled with dense jungle wallpaper and it is her allotment that Jarka runs to in order to seek safety and shelter for her new family. This link between feisty Irena and nature provokes questions about the nature of her family. Though each woman is different, fierceness runs through each of the personalities. As a result of this there is an atmosphere of claustrophobia in the small apartment which, surrounded by the impenetrable foliage, screams of the wild and independent nature of each of these women. Because of motherhood, neither of them have had their own space to grow and they are all grasping for something out of their reach. Although the film does not give them a way out, there is a positive message to be found. Although Irena does not find redemption, her spirit triumphs in the imagery of nature reclaiming the urban scenery. Two generations down the line Jarka too seems to be fighting back, and growing, despite the weight of urban society.

Little Harbour declines to leave its audience with a happy ending, but in offering an imaginary one it follows through with its gentle treatment of modern life’s difficulties. Grófová takes care not to judge the story and its characters, which creates space for empathy and understanding. While it is true that the gritty topics that the film depicts are not tackled head on as a result of this, they are taken out of their urban constraints and softened with the charm of fantasy and adventure. This push gives Irena Grófová the distance to challenge the textbook social drama plot with nuanced symbolism.