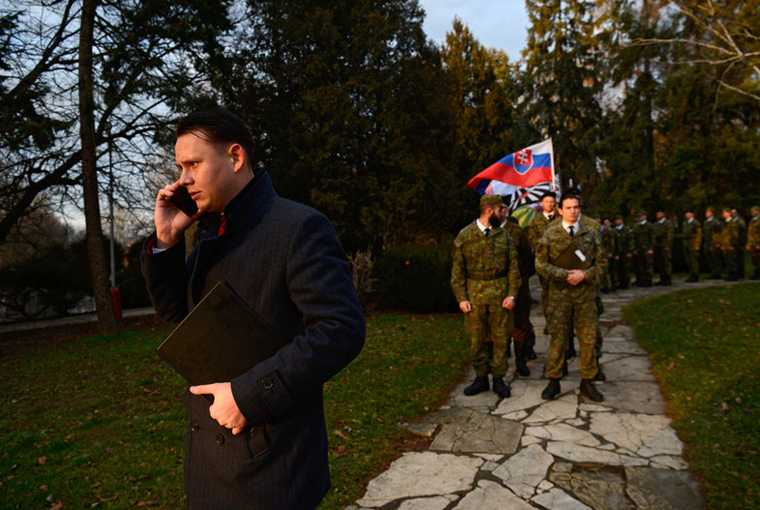 In a remarkable early scene of the documentary When the War Comes, audiences are introduced to the character of Peter Švrček, a non-descript, slightly doughy boy around the age of 20. During a university exam, he coyly describes himself as a natural leader who likes to dominate and give commands, a statement that almost seems implausible enough to be a joke. Yet several minutes later, we see him in his true element in the forests of Slovakia, kitted out in full army fatigues barking orders as if playing a character from Full Metal Jacket. Disturbingly, what at first glance appears to be a game among teenagers is revealed to be a fully-fledged militia with an established structure and an extensive base known as the Slovenskí Branci (Slovak Recruits).

Although officially an apolitical organization dedicated to “developing a love of our homeland, nature and cultural heritage” according to its website, the surface doesn’t take much scratching for the extreme right ideology to seep through. In addition to loathing refugees and lamenting a perceived lack of state control, the group’s members espouse a heavy nationalist/pro-Slavic agenda. Significantly, Švrček, the founder and leader of the Slovenskí Branci, received his own military training from a Cossack unit in Russia. While the ad hoc army gains more traction and acceptance, the film charts its internal development as the other key figures learn how best to present themselves to both the media and the authorities in order to remain innocuous yet creditable. Inevitably and most crucially, it also documents the emergence of Švrček’s intentions to enter the political sphere, and ends with the official founding of the Naša Vlasť je Budúcnosť (Our Country is the Future) party.

The film’s most obvious asset is Švrček’s openness in front of the camera. At its most basic level, this consists of the access he grants the crew in terms of allowing him into his (shockingly bourgeois and normal) family home and other everyday intimate moments, such as scrolling through Facebook. However, the real strength of this does not so much lie in the revelation of his political beliefs and aspirations, which could be attributed to the fact that he sees no need to feel ashamed of them anyway, but rather in the frank discussions that paradoxically show the extent to which he manipulates his public image. Time and again, he places verbal limitations on what can be revealed in which context and is seen actively manipulating relations with the authorities, who for their part appear apathetically compliant (in general, both members of the public and representatives of institutions appear disturbingly untroubled by the unauthorized militarization and weaponization of a group of angry, entitled boys). All of this makes it more astonishing and perplexing that he would let his guard down before self-proclaimed “liberal snowflake” director Jan Gebert. While it well may be the case that Švrček was expecting to be able to use the film to further his own purposes, there are also times where he clearly gets caught up in the moment and stops curating his self-presentation. A particularly compelling instance in this regard comes when a journalist asks him about whether he intends to get involved with politics. While he replies in the negative, he cannot hold himself back from sharing his shock with a friend that it was as if she knew what he was planning but couldn’t admit.

However, the documentary’s greatest strength lies in the nuance of its portrait both of the budding totalitarianism and the articulation of his burgeoning brigade. While with his characteristic oiled hair and braces, at times Švrček resembles an excessively stylized character from a surreal wartime drama à la Fassbinder or Pasolini, the film also goes to lengths to show the ordinariness of his background. His family seems respectably middle class if somewhat passive, and their home perfectly functional if somewhat sterile. No easy narrative plot point is offered to account for what it is that turns a seemingly average boy into an aspirational tyrant. While the dominant impression he gives in the film is inherently reptilian, the effect of his charisma on others is also palpable.

Indeed, as an extension of this, the militia itself is not dismissed as a gaggle of outcasts playing with guns, rather the film lays out the ever-evolving intricacy of its organizational structure and its conscious infiltration of community institutions. On the one hand, we witness the military group transform from some sort of a democratic structure into a totalitarian model with Švrček appointed leader for life. On the other, we see the group effectively incorporating seemingly innocuous symbolism into its brand identity, providing security services for folk events and presenting a family-friendly image. The chilling climax of this process of normalization and acceptance comes when the Branci are allowed into schools to lecture children about the superiority of the Slavic race.

Overall, When the War Comes is exceptionally cleanly made, both at the level of its cinematography and editing, making a strong, persuasive point about the now insidious nature of these kinds of emerging vigilante groups while managing to avoid sensationalism and derision. While clearly adopting a stance that opposes the ideology presented by the group, it nevertheless remains impassive enough to be used as a potential platform for a dialog between the opposite sides. Critically, in its careful exposé of the internal and societal mechanisms allowing the Slovenskí Branci to flourish, it manages to go beyond the specificity of the Slovak context and hold up a mirror to an unfortunately broad section of the contemporary world at large, and moreover it does so in a compelling and filmically satisfying way.