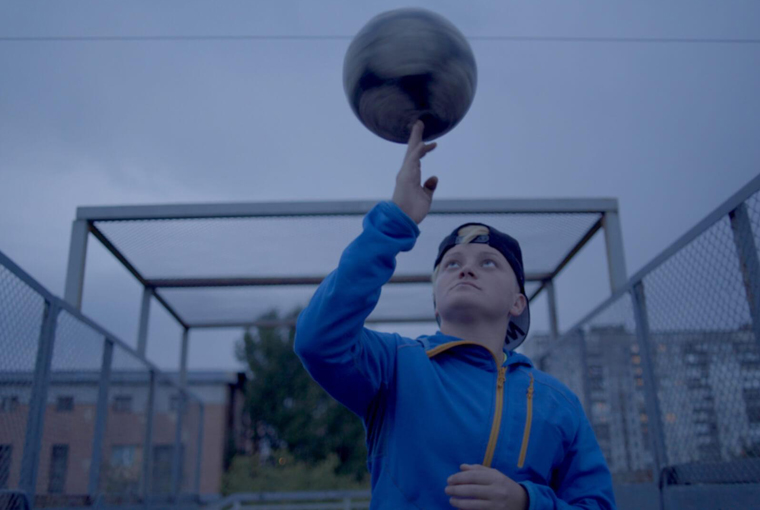 Alisa Kovalenko’s documentary Home Games is shot in a poverty-stricken suburb of the Ukrainian capital Kiyv. There we encounter a resourceful young woman at a pivotal juncture in her life. At just twenty years old, Alina is forced to choose between following her dream of playing in the national football team (an aspiration she has trained for her entire childhood) and caring for her brother and sister after the sudden death of their mother. Alina is continually forced to jeopardize her own happiness in the hope she can provide her siblings with a more advantageous upbringing than she was ever offered. Her absent and alcoholic father presents yet another burden for her family, as he gambles away their weekly government maintenance allowance. Kovalenko follows Alina’s story through each sacrifice and compromise as our heroine struggles to negotiate her brutal transition into adulthood.

The threat of poverty plagues every aspect of mise-en-scene within the homestead. Inside the confines of Alina’s pokey one bedroom flat seats are scarce, surfaces are untidy and the walls are crudely painted with pictures of cartoon characters. Meals are often served on the floor and curtains are used as makeshift partitions for privacy. The apartment is covered in useless bric-a-brac, which is hoarded in the hope that it might one day be utilized to fix something else.

During the Christmas holidays (a time normally associated with consumerist excess), Alina sits armed with a needle and thread, sowing her own underwear back together. She closely inspects her brother’s worn out shoes, the soles of the feet slowly becoming more detached. She repairs his broken toys, taking apart a cheap plastic car with the precision and intent of a professional mechanic. Reluctantly, Alina calls a friend to borrow money, but to no avail. Her unsuccessful attempt at being granted a short-term loan leads her to packing a plastic bag with trainers and a handful of disused mobile phones. In the city center she barters with a street market stall seller in order to gain some petty cash for her items. The specifics of the transaction are unimportant. There is no dialog that allows the audience to define the value of these things, merely the ambient background noise of the busy urban sprawl that lays above them on the bridge. What these scenes emphasize are the necessary lengths Alina must take to make ends meet and how engraved they are into her daily business. This single journey is a monotonous and drawn-out affair but also one of many others she will need to embark on, each similarly draining away her energy, both physically and emotionally. These chores are a constant reminder of the family’s economic state of affairs, where the camera persistently captures the routine frugality of Alina’s life.

Kovalenko’s film may be fraught with hardship and tragedy but it is Alina’s unwavering determination in the face of oppression that offers the audience an arresting and emotional viewing experience. Alina is a formidable subject with her unbreakable spirit in the face of countless downfalls and setbacks. Her parents proved to be poor guardians during her childhood. Her father Roman robbed an office and her mother acted as his accomplice. They were both arrested and sent to jail for a large period of Alina’s adolescence and it is their failures that spur her protective sense of motherhood towards her brother Renat (seven) and her sister Regina (six). She wants to provide for the family not because she has to (although that is most certainly the case) but because she wants to and she can. Alina is an ideal role model in this respect. However, it is her forgiving nature and extreme altruism that cost Alina her own future prospects. She has taken it upon herself to fix the problems caused by her parents and in the process sacrificed her football training and, potentially, her professional sporting career.

At the beginning of the film, what confidence and drive Alina has on the pitch seems to dwindle in the household. The reality of her put upon responsibilities is not something they coach in school. Towards the second half of the film, Alina appears to have taken control over her duties as a sister and a mother. She successfully enrolls her siblings in the new school term and seeks legal aid consultation, which provides her with enough materials and funding to start some home improvements in the flat. However, the struggle has now switched, and it is the football games she plays that prove to be unwinnable. Just as Alina was undeterred by the financial and familial constraints weighing heavy over her head, she similarly refuses to play the victim on the field and perseveres nonetheless, even when the odds are not stacked in her favor.

Home Games is an inspiring documentary that instills hope and sympathy for its subject matter. It is not so much about football as it is about teamwork. Alina surrounds herself with a keen support group of long-term childhood friends, team players, coaches and even government officials. In so doing, the film presents the Ukrainian people as a strong, nurturing community. Alina’s story fits into many conventional and generic underdog narratives, but in this case she also has the help of a nation behind her. Strictly speaking, Kovalenko’s film doesn’t promise any political agenda. Yet, it could be argued that Alina does in fact represent a collective consciousness of the lower classes in the Ukraine. The poor face the same endeavors she confronts, encumbered by their social and economical status. In this way, Home Games can be viewed as somewhat patriotic and celebratory, a swansong to the belittled and marginalized people of Kyiv. If that is the case then, a win for Alina is a win for Kyiv and the Ukrainian people and her brighter tomorrow is a success story that the entire country can revel in.