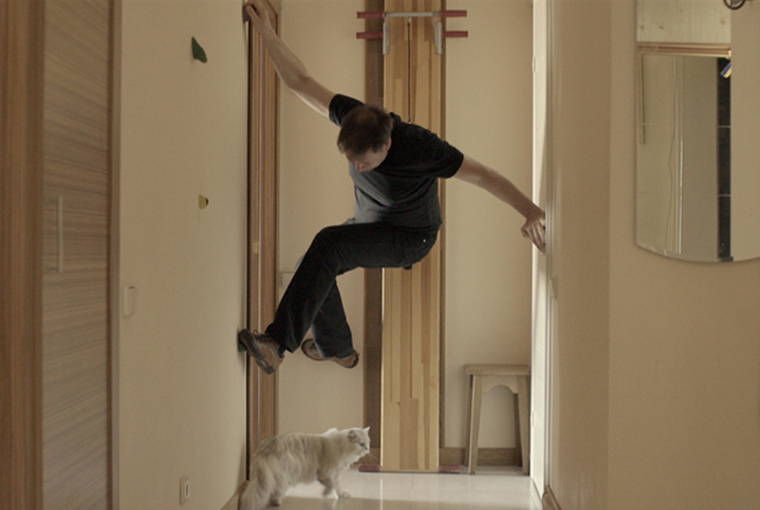 Valentyn Vasyanovych’s new film Black Level is a silent drama telling the story of Kostya (Kostyantyn Mokhnach), a lonely wedding photographer in the midst of an existential crisis. In fact, Kostya’s whole life is an ongoing crisis. As his 50th birthday is drawing closer, not only does his beautiful girlfriend Katya (Kateryna Molchanova) break up with him. To make matters worse, both his Persian cat and his father pass away. It is the most depressing plot one can imagine, and yet Black Level does not really appeal to the spectator’s emotions. The lack of empathic involvement with Kostya can be explained by what could have been the film’s greatest strength: the absence of any dialog. Producing a film without dialog in 2017 is a deliberate and quite radical return to cinema’s primordial means of expression, the moving image alone. In Black Level, however, the silence seems somewhat artificial; instead of being a daring stylistic device within a coherent aesthetic framework, it evokes rather pathetic effects.

The film opens with the preparations for a wedding shooting in a ballroom. The bride is still taking infinite selfies at different positions with her friends, in silence of course, the only sound made by their hasty steps and the flashpoint’s clicks. Already in this opening scene the lack of dialog evokes a confusing effect; it does not really make sense that everyone is mute, the viewer rather has the experience that something significant is excluded for whatever aesthetic reason. We see Kostya here for the first time, gloomily sitting on the big velvet sofa, before moving over into the single armchair. Ironically, this aged and depressed man captures other people’s thriving lives and happiness. Kostya’s only relation to life is the gaze through his camera; every human communication is replaced by the mechanical sounds of his technical equipment.

Against this background, Black Level certainly is an engagement with the photographer’s (and likewise the filmmaker’s) specific being in the world: his gaze is mediated by the lens of his camera and, while objectifying the other, he himself never actively participates in the world. The photographer is an observer, a spectator, a documentarist of life. This voyeuristic position can be quite powerful, including the pleasure of objectifying the other and subjecting them to the photographer’s gaze. For Vasyanovych photography  — as well as cinema — does not seem to keep such pleasures or empowerments any more. Instead of enjoying his voyeuristic position towards the world, Kostya desperately tries to overcome the distance to the others, aiming to break through the darkness of loneliness to life’s light.

In photography “black level” signifies the level of brightness at the darkest spot of a visual image. Thus the constant contrast between black and white is one of the film’s main structural elements. Black and white elements are juxtaposed during the shoots and the obscure surroundings are illuminated by several light sources like luminous screens, headlights and, only rarely, daylight. This world in black and white is rather abstract, emptied of the colors of everyday life. Of course, these somber environments are a metaphor for Kostya’s soul, his loneliness visually translated as darkness and the world depicted as a place with only little hope for individual happiness. Kostya is a man in constant struggle with a world that is completely indifferent towards his individual existence and decay. Moreover, and as evidenced by Vasyanovych’s evocation of this image in the arrangement of every single scene, Kostya really is the incarnation of loneliness. Endless, tedious car rides through the night, desperate pseudo-symbolic climbing in his flat and the climbing hall, empty repetitions of the same rituals like descending in the basement to visit the archive of his previous life – Kostya wanders through an unhappy life in a faceless Moloch of a city.

On the level of relationships, the interactions between Kostya and Katya are most interesting. Before Katya breaks up with Kostya, they desperately try to have sex in the car’s trunk in his eerie garage. This rather bizarre scene is captured with a distancing perspective through the car’s front shield. On this rare occasion in Black Level, pathos is replaced by a certain melancholic irony that allows us to feel the desperate longing for intimacy and its inevitable unfulfillment. The break-up scene is taking place in Kostya’s car as well; Kostya and Katya are sitting next to each other, the camera’s gaze is again oriented straight through the front shield. We hear thawing snow and rain pattering at the car roof, but no sound from within the car makes its way to the outside. The car is a cloistered internal space, as isolated from the outside world as Kostya himself. Again, the dialog’s muteness seems a little forced: we see Katya moving her lips, insistently talking to him, but we do not hear her voice. Kostya, on the contrary, endures her monologue without saying a single word; he seems to be completely desolate and introverted. Katya leaves him alone in the car and when she slams the door, a small snowslide drops at the front shield, obscuring the view.

Black Level is an ultra-low budget film; its selection as the Ukrainian entry for Best Foreign Language Film at the Academy Awards in 2017 is hence especially remarkable. In an interview for Cineuropa with Martin Kudláč in 2015, director Vasyanovych describes his film as a very personal experimental project. The film is about his friend, a “real” photographer who “tries to unearth the secrets of other people’s happiness, but unsuccessfully.” The film’s script was, Vasyanovych describes, developed during the shooting process. After he observed his friend Kostya, the two came up with scenes and re-shot them several times with a small Sony 7 camera. There are only few shots and a flow of long takes in which the camera slightly moves. Black Level displays a documentary gaze which evokes an almost tender intimacy and yet maintains discrete distance to its protagonist.

The film’s beauty lies in the long takes that reveal some truly poetic images. This happens, for example, when Kostya and his father in a wheelchair are sitting next to each other in an almost dark room, both deeply absorbed in their own minds. The only source of light comes from the table at which Kostya immerses himself in his object lenses. They are there, quite simply: two old and disaffected men, completely isolated from each other, from their past lives and from the world. There is no necessary connection between father and son, no dialogic relation, no shared reality. Due to the sharp contrast between light and darkness, the scene breathes the deep melancholy of a black-and-white film. Was it really necessary, one might ask, to “intensify” this deep melancholy with Schubert’s Death and the Maiden in the background? Such is a recurring impression in Black Level: there is real aesthetic ambition in the film, but some of its radical potential is thwarted by the excessive urge to make it as existentialist and artsy as possible. 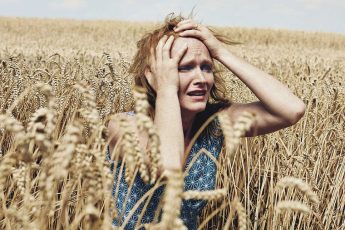 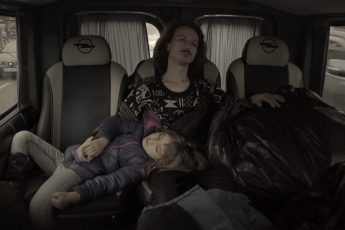