“Our Work Is Worth More Than the Life of One Man” 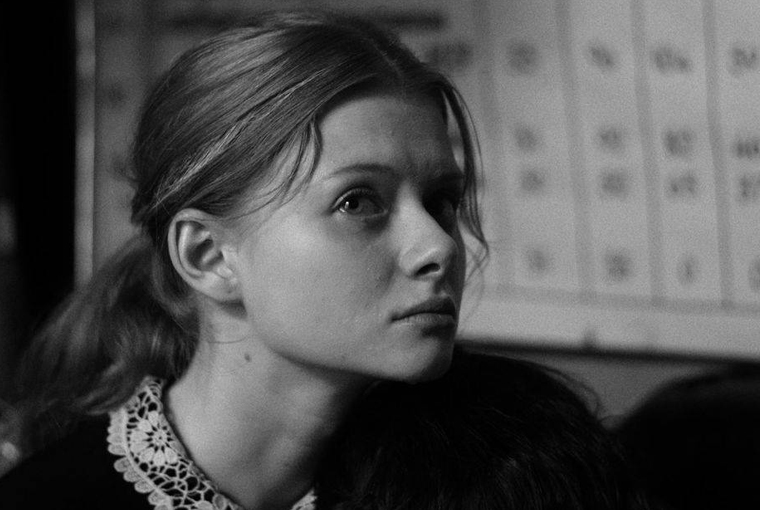 Set in an alternative reality, Oreck’s science fiction film rewrites the harrowing history of the siege of Leningrad during World War II. In her dystopian vision of the future, the war rages on in St. Petersburg and the denizens of the city face mass starvation. Lovers Alyssa and Vadim fight for survival in the hope they can prevent the imminent end of mother earth and all mankind with the help of scientists working day and night at the world’s first seed bank.

The film’s aesthetic evokes a similar style of imagery to that of early Soviet cinema. Both share a stark socialist realism, in which the bleakness of the black-and-white format and striking close-ups of their actors reveal a pain conveyed like no other. Some of the compositions look as if they were lifted directly from the editing rooms of Eisenstein and Pudovkin. One initial sequence is a series of said portraits, disembodied heads framed by a pitch-black background. The chiaroscuro lighting emphasizes the contrast in tones, highlighting every wrinkle and frown as well as the worn-out textures of their clothes. The frankness of despair and plight is so inescapable for the viewer that the emotional impact is almost overwhelming. One Man Dies a Million Times is a difficult film to watch, especially as the film progresses. Over a matter of months, the once beautiful young couple disintegrate before our very eyes. Dry cracked lips, sunken eyes and protruding cheek bones litter the screen as the characters fall deeper into delirium and dystrophy as a result of starvation.

A title card informs the audience that these dramatizations are in fact heavily informed by recollections of survivors from the siege of Leningrad. In particular, the dialogue and voiceover narration is quoted from diary entries and letters written during this time. What at first appear to be somewhat prosaic lines, are actually truthful utterings about the everyday fatalism the citizens lived with. At the death of her friend, Alyssa internally admits: “If I survived, it’s because I didn’t sacrifice enough.” The speech is both individualist and pseudo-existential, perfectly encapsulating the sense of martyrdom that was endured by the public on a collective scale. Alyssa continues to preach her utilitarian philosophy and the necessity of a collective suffering when her colleague attempts to steal from the seed bank to feed his dying mother: “We shall go to the pyre. We shall burn. But we shall not retreat from our convictions”. Alyssa is a modern-day Joan of Arc, an inspiring representative of the people and a protagonist who embodies a collaborative and shared historical voice.

The mise-en-scene lacks any sense of modernity, depicting a very much unevolved version of the futuristic city. Filmed on location at the N.I. Vavilov Research Institute of Plant Industry and the neighboring streets of St Petersburg, One Man Dies a Million Times is grounded in realism despite its fictitious, post-apocalyptic premise. This lo-fi science fiction approach employs familiar, generic iconography only to throw the viewer off-guard and into an uncanny, parallel universe. Anachronistic items such as retrograde television sets, old-fashioned interior decors and a lack of contemporary advertisements displace any comprehensive framework of reality. The setting could be anytime and anywhere. There is a universality to the war-torn cityscape with its air raid sirens, carpet-bombed streets and blackout apartment windows. Scenes of mile-long queues outside of grocery stores, food stamps and rationing kits are so well orchestrated it’s as if they are documented from photos of a history book.

Only first-hand accounts can inform the specific turmoil that befalls Alyssa and Vadim. They are mugged for scraps, burn book pages for warmth and even boil a leather belt for sustenance. On one outing they discover a naked man propped up against a brick wall, disemboweled, suggesting the lengths to which some people will go to survive. When one of their household members passes away, they use curtains to wrap up the deceased, dragging the body through the open streets on a piece of drywall. Shuffling through the icy, cobbled pavements, they pull the casket by a flimsy string to a spot outside a seemingly abandoned and disheveled hospital. The couple pile the corpse unceremoniously next to a gathering of other dead strangers’ bodies. The process is performed so perfunctorily that it suggests these actions are done so often that they have become desensitized to it, numb to the psychological trauma it would have caused the first time it happened. One Man Dies A Million Times is an extreme vision that exaggerates the evil of man, the horrors of war and the importance of the environment. Yet Oreck’s activist filmmaking preserves this part of history so that it doesn’t become a distant, long-forgotten memory of the past. Instead, she forces us to heed her warning of a potentially fatal future that doesn’t lie so far ahead.