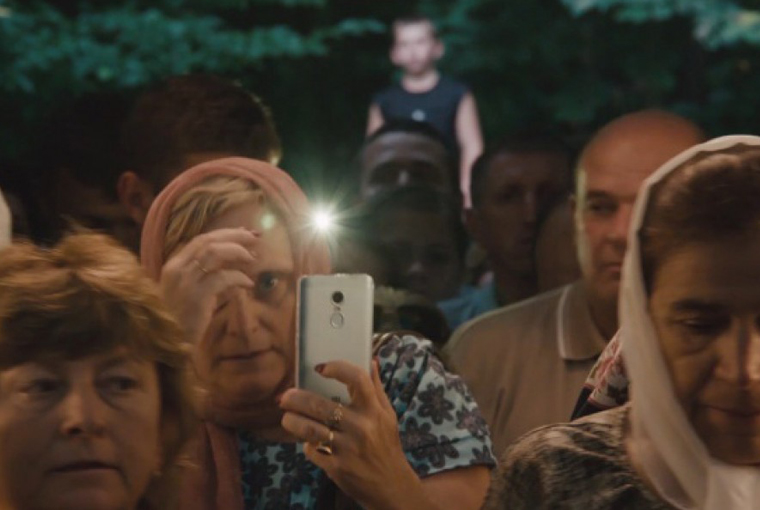 As the opening credits roll over a black background in New Jerusalem, we hear a confused cacophony of voices. The one thing that can be heard acutely is a baby wailing. A crescendo of a single, necessitous infant’s cry. In the line “In the beginning was the Word”, “word” is a translation of the Greek “logos”, perhaps signifying Jesus – he who was carved out in the flesh and sent to live among us miserable humans for a bit. But whoever translated “logos” as “word”, was clearly forgetting about babies: those inarticulate-articulate creatures who know how to express themselves faster than any adult. Herein lies the lucidity of New Jerusalem, the Ukrainian documentary about an annual pilgrimage to a sacred site. It brings us back down to earth by showing how, for believers, God resides in the everyday, in the exhaustion and hunger of a small baby, soon to be nurtured by a kind mother.

Zarvanytsia is a small village with about 300 inhabitants in the Ternopil Oblast in Western Ukraine. Every year, hundreds of pilgrims head there from around the country, singing and celebrating their belief alongside like-minded travelers from neighboring Poland and Hungary. Children, teenagers, and adults all engage in this ceremony, walking all day long. Many of the worshipers carry crosses or icons, some wear Ukrainian shirts – vyshyvanka – with their traditional embroidery. This mixture of patriotism and religious belief is not trivial. During Soviet rule up until 1991, Greek Catholics were not allowed or able to practice their religion openly. Now, they are making up for lost time.

New Jerusalem is co-directed by artistic partners Yarema Malashchuk and Roman Himey, who have collaborated on numerous visual art projects as well as films. Though we are shown singular instances of deep worship, there is no unnecessary spiritual embellishment in the footage. The documentary provides us with the nitty-gritty details of such a journey: showing not only the people walking and singing, but also the camper cars and the bags lumbering along beside them. In the villages, the travelers always get a hearty local welcome. With the encouragement of the camera, these deeply devout people talk about everyday things, often in great detail. We understand that their lives offer few moments of the divine, and that, to them, being on the road to Zarvanytsia is important.

Although the directors linger on the journey rather than the destination in the film, it’s interesting to mention the religious complex itself which has been dubbed “New Jerusalem”. Before this structure was built, the place was already an important destination: legend has it that a miraculous icon appeared to a weary monk there in 1240. A church was built soon afterwards to house the icon, and although this church was knocked down, others have been built in its place over the years. Then, between 2014 and 2018, a detailed copy of the city of Jerusalem appeared in the middle of the forest, next to this sacred place. In the film, we can recognize some of Jerusalem’s many attractions more clearly than others. Walter Benjamin himself might be pleased to see the Holy Sepulcher, with crowds of primarily Eastern European visitors marveling at its beautiful construction. Though this project is clearly quite astounding, and questions can be raised as to how it was funded in the midst of a Revolution, the directors downplay this side of the story, leaving us with many unanswered questions.

The collective vitality of the journey puts everyone in visibly high spirits. As one family prepares to join the pilgrimage for seven days, the youngest child envies his older brother’s being entitled to join in with the adults. The cinematography, carried out by the two directors, is simple yet stylish. The best reactions come from long and steady observation.

In one gem of a scene, the camera is pointed towards a rock on which religious figures are said to appear. Here, we overhear the comments of pilgrims stopping to observe the holy place. Some of them see nothing, while others see Madonna in all her glory. Remember the scene in Fellini’s Nights of Cabiria when Cabiria prays to the virgin for a miracle? She is disgusted by the greedy, voracious want of the people around her, and her humble prayer to live a better life is set against their cries. Here, we see something quite the opposite. Pilgrims speak quietly among themselves, in small groups of two or three. Observing them, observing their own belief, we are reminded of the need to constantly question what we think and why. One woman says to her son, “Some years I see it clearly, other years I see nothing.” This year she sees nothing.

The appearances in the rock thus become a visual metaphor for the collective yet individual experience of religion. Elegant pairings of visuals and words pervade the whole documentary: from one force-whispered conversation about the restoration of the church between two marveling Catholics, to a line of walking pilgrims singing ecstatically, to the babbling of an old man about his many published books, to three obviously bored young women. Even at the important time of pilgrimage, the everyday reality of humdrum emotions comes to the fore. But sound and image still make a sacred pairing, they bring the event to life. The word in the eye of the beholder. 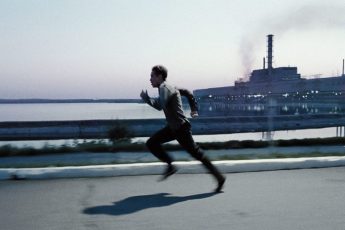