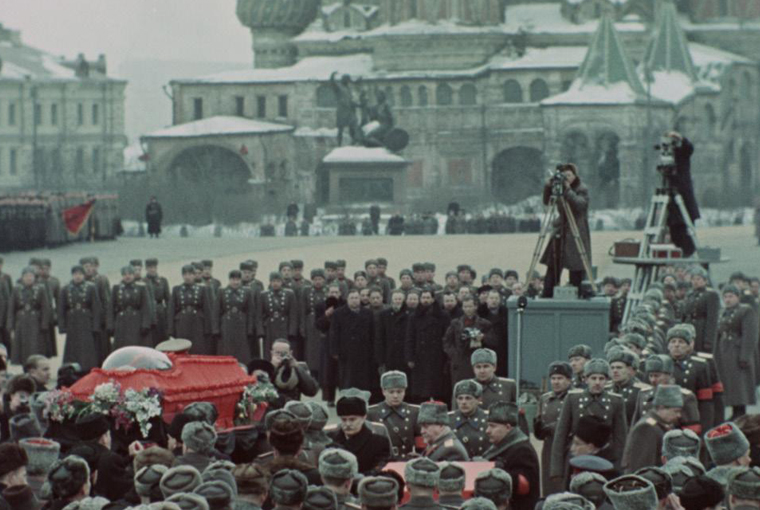 State Funeral by Sergei Loznitsa takes the hundreds of hours of footage made in the days following Joseph Stalin’s death in March 1953 and whittles them down to a mere 2h15. The film’s officious and impersonal title rings of a military-style event. By avoiding Stalin’s name, it eschews the kind of personalization which might conjure up tenderness, shared goals, and a sad history. But emotion is of course very much present in the footage of suffering crowds and sorrowful mourners. Impressively, this avoidance of the personal will lasts until the film’s closing credits let the cat out of the bag: during Stalin’s reign, twenty-seven million people were murdered, executed, tortured to death, imprisoned, deported and sent to labor camps, and fifteen million were starved to death. After so much praise and adulation, this could be a shocking revelation.

The late appearance of this information in the film has been widely discussed and criticized.​1​ Should the audience have been warned of Stalin’s crimes earlier on? How can people who have not studied history be expected to understand what’s going on? And beyond just knowing that Stalin spells trouble, the layman cannot be expected to know who each “character” in the film is. There’s his son Vasily Iosifovich – he’ll be forced to retire from the military and put in jail just a few months later. There’s Georgy Malenkov, looking unusually pale against his black hair – after he leaves the party a few months later, he’ll become the head of a hydroelectric center in Kazakhstan. But as we watch the crowds, we are very much in the action, in the present of the film.

Masha Gessen says that “this absence of explanation creates a particularly powerful effect of both immediacy and estrangement […] What is lost in the balance, of course, is context: ordinary viewers”​2​. She is absolutely right. Those hoping for a history lesson will be disappointed. But this pushback against explanation can be understood more thoroughly when you consider the history of the footage. Originally, important Soviet filmmakers were ordered to collect film material during the obsequies. This ended up as a 73-minute documentary, Great Farewell. But when Soviet apparatchiks watched it later, they banned the film and all the footage. The bland humanity on the pale faces of the presidium members alone would have been decisive for any censor. What they were trying to avoid showing is exactly what Loznitsa’s directorial composition shows even better than the footage does in and of itself: the cold and implacable apparatus, which denies individuals even a glance in the wrong direction. Most of the time, no one notices the cameras, but sometimes someone suddenly looks straight at it, as if suddenly breaking the fourth wall of the role they are playing. In the two images below, the stares are slightly disturbing, as if the man and girl briefly woke up from a strange sleep before glancing away.

Great Farewell was, in comparison, an almost-perfect example of Soviet propaganda (not quite perfect enough to show the public, but then again nothing was). A honey-tinged male voice-over explains almost every second of the film, and slow violin music fills up any remaining room for thought. The film thus plays the role of an educational broadcast on how to grieve the death of a leader. The spectators, as children, are expected to follow along.

“I’m trying to honestly hear out all the participants of the Soviet drama,”​3​ says another great Soviet documentarian, Svetlana Alexivitch, in an introduction to one of her books. The constant noise that surrounded Stalin’s death, the announcements over loudspeakers, the newspaper coverage, the overlong speeches in State Funeral mirror this information-overload. The choice of footage bears witness to this without preventing us from criticizing it, as does Great Farewell. All of the sound in Loznitsa’s film comes from the 28 hours of radio broadcast on the day of the funeral: the music, the speeches, the crying, even the footsteps on the marble stairs of the House of Unions. Tchaikovsky’s 5th symphony, which had become very popular in Russia after WWII, figures heavily in Loznitsa’s reconstruction of the soundtrack. The video footage is also all drawn from primary sources and is mostly in black-and-white, though occasionally in color. Sometimes the footage will switch back and forth between black-and-white and color within one scene. Thus, the pallbearers holding the coffin appear in black-and-white, but as the coffin approaches, the image suddenly switches to color.

The only thing Loznitsa added are the names of cities the documentary takes us to. Name cards of cities in Turkmenistan and Kazakhstan remind the viewer of the extent of Stalin’s power that was wielded mercilessly across the Union. I couldn’t help but compare what I was seeing to my own experience of a “state funeral”, that of Diana, Princess of Wales. Here too people were in shock. In the former British colony where I grew up, we were plunged into a collective state of mourning. This figure who had hitherto gone by barely noticed in our daily lives, was suddenly supposed to be very important. Television was bombarded with documentaries about her life, for days on end. We saw her smiling prettily, fearlessly stepping out over landmine-riddled fields. At my primary school, we had a minute of silence, and later learned to sing Elton John’s Candle in the Wind, with our voices trembling. Thousands of kilometers away from the Buckingham palace, we were touched by this death.

Of course, going back to that moment in my childhood now, the funeral which had seemed stiff was relaxed compared to Stalin’s. In footage I recently revisited, one girl reaches up out of the crowd and takes a photo. Memories of that day belong to her. At Stalin’s funeral, the mourners were controlled by total strictness. They turn their heads to look at the coffin out of obligation. The people I found most fascinating were not the dignitaries or the members of the presidium, but the average people, caught unwillingly by the cameras. A group of girls from the Kirov factory in Saint Petersburg listen to a speech about Stalin’s life, their eyes flooded with tears and not once glancing at the camera, which they clearly appear to be aware of. They are straight-backed and their chins are lifted. There is something distinctly performative about this state of suffering.

As Loznitsa said about Stalin’s funeral during an interview with Regards sur l’est, “It is not absurd: it is a kind of mass hysteria. No one can hide from it. I believe that, if we discover and describe its mechanisms, we can somehow be protected, or at least, no-one could fool us any more”.​4​ Explanation is a way of trying to take back control of the cataclysmic events of the past. Its role is hugely important. But this film’s goal is not to explain. It seems that Loznitsa wanted to make something as different from Great Farewell as possible.

What disturbs many people about the film – its lack of contextualization – is exactly what allows the spectator to observe uninterruptedly, as if they, too, were a member of the crowd. They see something clean and shiny, the love and devotion felt towards a great leader. The modern, informed viewer watches suspiciously — “Those are not real emotions, those people cannot be that stupid”. Some have wondered at the fact that those crushed to death in Moscow on the day of the funeral were not mentioned, yet fail to see that this knowledge, which comes easily to us now, is far beyond the scope of the mass’ attention. And in any case, what does that mean to someone who is willing to be manipulated for the sake of their dreams or physical integrity? It’s hard to acknowledge our own needs reflected so nakedly to us in the faces of unknown 1950s Communists. But maybe, after two hours and fifteen minutes of uninterrupted mourning and lamentation, we may be granted a glimmer of insight about our own inclinations to submit to and mourn over public personas, ideas, and times. This is the beginning of understanding the very ‘mechanisms’ Loznitza is talking about. 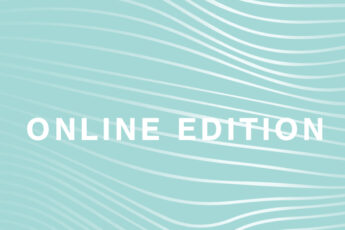 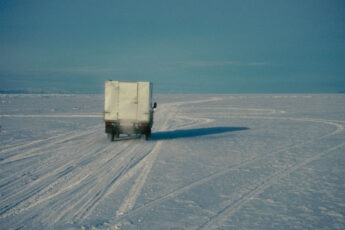