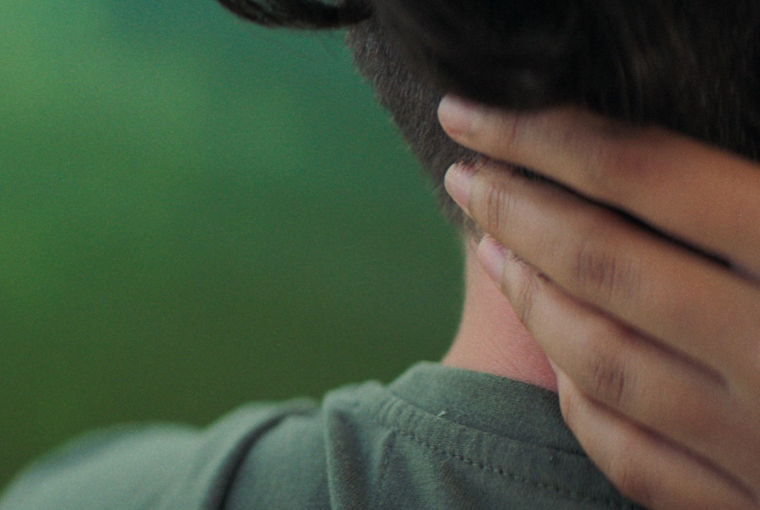 Set over the course of one whole day, from dawn to dusk, When Night Meets Dawn, winner of the Grand Prize at BIEFF (Bucharest International Experimental Film Festival) in November 2021, is an experimental short that follows an adolescent Bucharester’s explorations of the suburbs in the heat of a summer day. If other films at BIEFF 2021 focused on artificial intelligence, 3D animation, or identity-related topics, Andreea Cristina Burton’s poetic short sets such themes aside, instead choosing to explore how a hesitant adolescent boy relates to the urban landscapes surrounding him. Defying clichéd representations of coming-of-age films, the film does justice to the complexity of adolescence as a transitional period of physical and psychological awakening. The impressive cinematography and lighting provide the sensual side to this journey, be it through the warmness of daylight or the voluptuous mystery of dusk.

The film follows the boy, who is around fifteen years old and has dyed blonde hair, as he wanders through the outskirts of Bucharest. The character does not seem to be able to capture his own identity and seems somewhat lost. His boredom rhymes with his questioning and self-discovery as well as with his discovery of the outskirts of the city. If the film starts off realistic as it delves into the industrial districts on the city’s periphery, it becomes eerier and eerier in the second part of the film, when nature wraps the boy in exotic lushness. During the whole film, the boy is looking for a friend called “Viju” (as it turns out, the only name heard in the film is thus the name of a character that is not in fact there). Constantly looking for an unknown voice to understand him, and trespassing sensorial and urban boundaries, the main character in fact seems to be looking for his own identity, as the film portrays him as being different from the rest.

In the film, the rites of passage for this teenager are not so much accomplishments as acts of roaming. In the summer morning light, outside of a decaying Bucharest social housing complex from the late 1970s, the character is always on the lookout: he screams out for his friend Viju and calls a number on his smartphone with Google talk. The solitary quest of the boy becomes a sensorial initiation. It is through a sensorial exploration of his environment that the main character’s relationship to others and to the world is examined in the film. The first of the senses that is called upon is taste, with an image of fingers delicately playing with a fig, leading to a close-up on a mouth greedily eating the fig. The unknown pleasure of tasting fruit resonates with biblical connotations of unlocking knowledge of the world through taste. Plus, in iconography the fig is often seen as a forbidden and ambiguous fruit, both dangerous and sexual.​1​ Then, the character finds himself in the midst of pigeons in a dovecote. The pigeons are trapped in a wire netting and he is seen caressing them, an image that echoes the boy’s struggle to escape the prison of social norms.

One could understand this film as a phenomenological journey. Notably, for a large part of the film, the camera focuses on the sense of touch. The boy caresses the tablecloth where a half eaten watermelon lies, he puts his fingers through water, or tears off crusted skin off of his elbow. Merleau-Ponty’s analysis of touch seems to resonate well here. For Merleau-Ponty, flesh gives itself to us at the same time that it gives the world to us: there is an original “co-donation” of the self and the world through touch and flesh. The acts of touching in the film are not acts of taking possession, such as grasping or taking hold of something, but rather a brushing of the surface of the world. It is as if the boy desired to know the world through other means than the eyes or the mind.

Finding himself in a liminal space, the adolescent traverses the boundaries of the city as another way to explore his identity. Under Ceaușescu’s Communist regime, Bucharest had undergone particularly radical changes with what is known as the ‘Sistematizarea’ (‘the Systematization’), that is the mass demolition of historical buildings to be replaced with modern multi-story apartment blocks. Paradoxically, the controlling urban policies and extensive industrialization of the Communist era led to urban sprawl and incomplete urbanization on the outskirts of Bucharest, which created forsaken industrial spaces. The urban sprawl of the city on its peripheries as well as the gradual degradation of its built-up modern architecture are a result of the poor urban planning policies of the Ceaușescu era. Apartment blocks in the suburbs were developed partly on greenfield land and in areas with rural-type cottages, creating semi-industrial and semi-rural spaces where the poorer population used to live. The initial utopian dream of the 1970s of creating a new type of communal living in the suburbs soon revealed itself to be a failure, as most of these buildings decayed rapidly. Today, the reuse of industrial suburban sites has been delayed in Romania as well as other post-socialist countries, which contrasts with Western Europe, where they quickly became part of the urban development process. Vast vacant spaces, decayed 1970s buildings, empty suburban streets where graffiti adorn walls, and a repair shop that seems almost out-of-use, are an urban mirror for the main character’s boredom and desire to escape.

The camera then turns to an abandoned site surrounding a large lake, where teenagers roam without parental oversight. As if they wanted to break away from the heavy history inscribed in the city’s planning, the film exposes how the new Generation Z (or iGen) errs in the ruins of the semi-urban and semi-natural landscape on Bucharest’s periphery. In When Night Meets Dawn, the fringes of the city are left behind for teenagers to roam around, in Pasolinian tradition –  think of the disconcerting beauty of the Roman youth living in the decayed suburbs of Rome in Accatone. Here they discuss tripping on drugs, playing poker or breaking up from a partner. This transgressive generation is developing away from the traumas of the past, re-appropriating the urban spaces in an alternative sociability, unlike, say, the 1990s generation, which was still marked by the devastation of the Ceaușescu regime and often found their rebirth to be extremely challenging. An extreme image for this generation’s struggle to leave behind the past era is the singular case of orphans who had been separated from their parents because of the poor birth-control policies of Ceaușescu’s regime (both contraception and abortion were forbidden in Romania at the time), with some ending up in the underground sewers of Bucharest, where they took drugs and lived under miserable conditions.​2​ In the film, on the other hand, the decaying outskirts become a place for teenage inventiveness to thrive, a place for their bodily, psychological and gender metamorphoses to materialize.

However, the boy does not seem to pursue other teenagers’ pretensions to be adult, always answering briefly to any questions asked while we hear teenage whispers converge into a chorus about love, dreams, and fears. One never sees any body in its entirety. Instead, the camera focuses on a hand, or on a mouth speaking, or on a piece of clothing, as we overhear fragments of teenage conversation. Gender is a theme of conversation too: a young girl says she has dreamt of becoming a man. Then she suggests freeing herself from gender, and embracing asexuality. The main character’s queer sexuality is also implicit; the audience may wonder if he is bisexual, homosexual, or asexual. Perhaps “Viju” is a love interest or loved one? Other adolescents do not seem to know who this Viju is, and notice that he keeps appearing and disappearing. When two lustful teenagers kiss next to the lake, the main character is seen in the background looking away, as if unable to relate. The boy seems to be alone despite his search for a connection, enclosed as he is in his inner world of internalized emotions. He is seen trying to smoke, lying on the floor and watching the other teenagers playing tic-tac-toe. His sexuality does not manifest itself in engaging with others, but in engaging with everyday life senses. He does not seem to participate in the teenage conversations and rarely seems to take part in their games, preferring to remain on the edge. This explains the high angle shot of him lying down in a covered area near the lake, with the camera hovering above him and other teenagers’ voices echoing in the background.

“Your palms are sweaty. You make me miss him,” says a girl to the main character. The boy’s hands are sweaty because he has been touching surfaces in the heat. Hands are both his means of approaching the world and what separates him from other teenagers. The girl might be in love with some other boy, which both makes the girl approach him and sets him apart from her, as he is not the one she is in love with. Thus, touch in the film is a way of experiencing the world as well as others, but it is also what separates one’s self from the world and others. This very experience is expressed by Merleau-Ponty’s analysis of double touching in The Visible and the Invisible. In the chapter “The Intertwining  –  the Chiasm,” being touched and touching are two coinciding experiences, one is always touching and being touched at the same time, yet the act is asymmetrical. Reversibility is “always imminent and never realized in fact. My left hand is always on the verge of touching my right hand touching the things, but I never reach coincidence.”​3​ In When Night Meets Dawn, touching is both a means of experiencing the other and the environment, and an instrument for discovering one’s own singularity and difference.

Progressively, the eeriness of nature at dusk unfolds before our eyes. The boy climbs over a wire netting, leaving behind the urbanscape for a phantasmagorical nature, before looking at his own reflection in a lake as he searches for himself in the midst of darkness. The other teenagers have disappeared except for a mysterious figure with a mask, which appears on the horizon. Finally, a short-focal-length shot focuses on the main character sitting next to a friend at an edge in the forest. Both are seen from behind, sharing earphones and talking to each other. Is this friend Viju? At last, the main character seems to have found an interlocutor, a person to understand him and help him transcend his loneliness, be it a friend or a boyfriend. The character’s final meeting with the Other is the result of a sensuous journey during which urban, sexual, and sensual boundaries have been pushed. It is only when the character finds himself in nature, free from the social anxiety of teenagehood, and far removed from the city, where his  struggles reverberate in the urban environments, that he can finally meet an interlocutor. This appears to be the phenomenological lesson of Andrea Cristina Bortun’s touching short film. 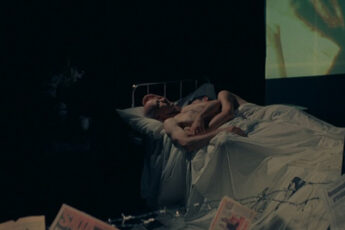