The Unspoken Burden of a Lifelong Friendship 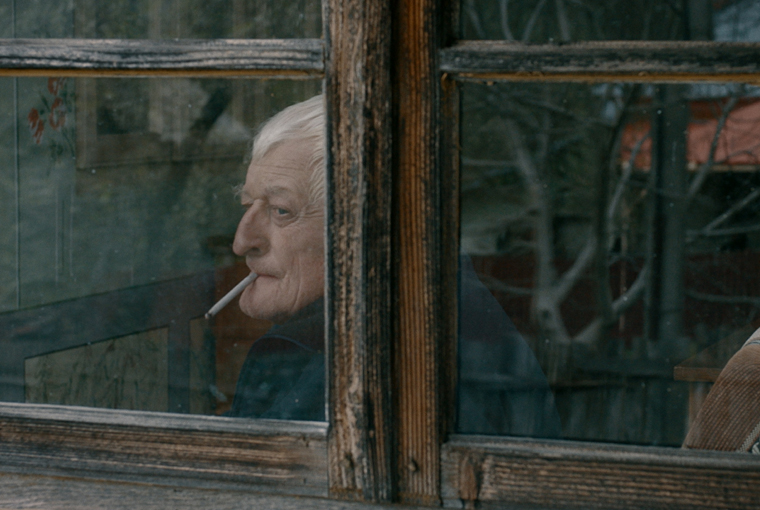 If a film’s title is usually the first of its aspects that reaches the viewer and therefore introduces initial assumptions about the film’s plot, a title’s “translation” into another language – and cultural context – may shift the focus elsewhere. In the case of Andrei Gruzsniczki’s latest film, După 40 de zile, the English title of the film, “No Rest For The Old Lady”, shifts the viewers’ attention towards a female character and her inability to rest – a notable change from the original Romanian title which literary translates as “40 days after”, a reference to memorial services found in the Christian Orthodox religion. Unlike the Catholic Church, the Eastern Orthodox Church has established a series of memorial services designed to regulate how death is integrated inside a community. The most important of these series of rituals is the one that takes place the 40th day after death and is believed to mark a spirit’s ascension to heaven. However, death rituals and memorials are only side themes of the film, its central focus being to question how lasting lifelong friendships are, and why it is impossible to confront grudges that accumulate over a lifetime.

The film opens with Emil, an old man in his 70s, inside the large and alienating space of a supermarket where food comes in the form of identical objects that are neatly arranged on indistinguishable shelves. Since Emil’s figure appears misplaced inside this consumerist universe, one would expect to witness a cinematic engagement with the fragility of old age and the struggle inside an environment that comes off as rather inhumane. However, Emil navigates this universe with ease, completing his shopping and then driving off through the town and surrounding forest on an old two-seater motorcycle. However, if Emil proves to be capable of responding to the challenges of a modernized world, he has trouble dealing with the religious faith and local superstition of his lifelong friend and neighbor, Titi.

In fact, the whole community display an unwavering faith in popular wisdom and superstition. During late Samanda’s memorial service, Emil is accused of disrespecting the ritual (and thus disturbing the spirit’s ascension) as he fails to hire a proper mourner and provide the ritual candles and pastries. However, these accusations of breaking tradition are not evoked in defense of tradition itself, but rather in avoidance of something else; the true issue – at least when it comes to the conflict between Emil and Titi – remains unspoken and can only be approached in an indirect manner. Notably, the elliptic conversations between Emil and Titi fail to clarify Samanda’s involvement in their lives. For a good part of the film, it remains unclear to whom Samanda had been married, and even when she is established to have been Emil’s wife, the details of her life remain obscure not only for the viewer but for the characters as well. For instance, Titi’s memories of Samanda include facts that Emil cannot recognize, from recollections of a type of food she supposedly liked, to her alleged biking skills. Her life’s traumatic moments, such as a suicide attempt, an abortion or even her extramarital love affair with Titi, are briefly mentioned as events that might have taken place, though memory seems to be both subjective and failing.

Samanda’s newfound absence introduces new dynamics into the friendship. When Titi claims to be able to witness the spirit of Samanda across the table of his own house, suggesting that Samanda eventually chose him over Emil, the claim causes further conflict between him and Emil. It also leads to Titi further detaching himself from his past life, upon which he looks back with both regret and romanticism. (That is so even though Titi’s claim is backed up by a popular myth according to which people who – like Titi – are born on Saturdays can see spirits.) Thus, Samanda’s lack of rest the English title refers to does not denote a spirit’s metaphysical impossibility to “move on” towards an afterlife. Rather, it refers to the inability of those who have been left behind to forget. The dead person lingers on like a memory or feeling of absence. This memory, in its turn, becomes a canvas onto which all kinds of thoughts and suppressed emotions can be projected. The film’s fragmented narrative and elliptic dialogues convey how certain things can never be expressed, even in a most caring friendship. Emil, Titi and late Samanda are all hiding skeletons in their closet, though nobody really has the force to uncover and expose them anymore, since old-age survival is a full-time occupation. As much is suggested by the recurring and lengthy shots of Emil’s slow cooking and everyday chores, while Titi no longer seems capable of eating alone.

Titi’s fatigue may be the reason why the film never truly delivers on the ideological conflict between down-to-earth Emil and religious Titi. Their beliefs are constantly in tension, balanced only by their lifelong friendship. Emil stands for an independent practical mindset whereas Titi is portrayed as a tired and sad man on a wheelchair, incapable of taking any initiative. Emil’s practical predisposition to life contains a desire to move forward, while Titi’s gaze turns doggedly towards the past. Inevitably, their confrontation ultimately arrives at a stalemate. After Titi claims being able to see Samanda’s spirit, Emil rejects his words and goes as far as accusing him of faking his physical disability. Eventually, he faces up to the whole community by categorically rejecting a world filled with superstition and religion. Still, Emil’s solitary resistance has its limits. Following a random popular saying, he decides to burn Samanda’s coffin (which supposedly will help her spirit rest), believing it will be the only way to escape the stalemate, so that everyone may move on. Trying to complete his act, a final confrontation between Emil and Titi erupts as they start physically fighting on top of her grave. However, even though one would expect this final confrontation to provide a cathartic effect for their friendship, the film just ends with a final surrender to the unspoken and unresolved. It is too late, for everyone. Even when their conflict reaches its peak, old age and fatigue prevail as Emil and Titi prove unable to summon the energy to face their past mistakes and weaknesses.

The film’s overall pessimist theme contrasts beautifully with a vivid and colorful visual style; comic moments satirize both stereotypes and popular wisdom. In the end, the film settles somewhere between drama and social satire. It goes beyond the recurrent – and expected – idea that shared and unspoken secrets may have a foundational role for a community and instead defines secrets as the burden of the unspoken which accumulates over a lifetime. The film proposes friendship as both a necessary and impossible condition wherein people have to accept each other’s weakness, even when that means turning a blind eye to the truth and sacrificing their respective personal values. One should ask though what would have happened if Emil, Titi and Samanda had all mustered the courage and will to confront each other at an earlier stage of their lives, when they still had the energy to spare and the exhaustion of old age could not yet serve as an excuse for remaining silent.