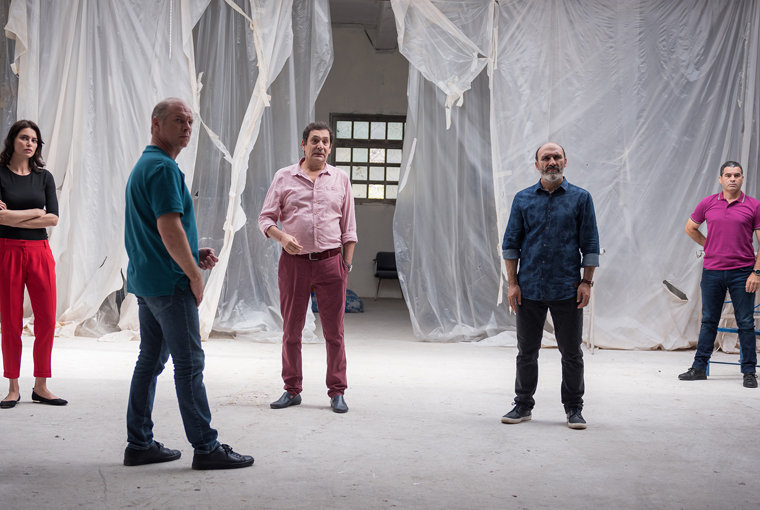 When the two main characters in Corneliu Porumboiu’s new feature La Gomera set their secret meeting point at the Cinemateca de Bucarest, they find themselves watching a screening of the classic John Wayne western The Searchers. La Gomera’s international English title is “The Whistlers”, and despite the evident references to the film genres of Hollywood throughout which often border on pastiche, Porumboiu’s latest pic is much more than another self-conscious European toil with the Classics (see Final Cut: Ladies and Gentlemen from 2012). Indeed, the director tries to bring his signature vision of conversational crisis to the film noir genre and mostly succeeds, the result being a suspenseful, light-hearted movie with a sombre, satirical edge.

For those of us familiar with Porumboiu’s work, the venture of The Whistlers will seem too soft and light compared to the kind of cinema the director has delivered for over a decade. The Whistlers tells the story of gangsters who learn a whistling language practiced on the Canary Islands called El Silbo Gomero, in order to evade police comprehension back in Bucharest. Policeman Cristi (yes, Vlad Ivanov of Police Adjective), along with his partner Alin (George Pisterneanu) and their boss Magda (Rodica Lazar) are tracking down a gang that appears to be laundering millions of euros for Spain-based gangsters using mattresses made in a factory in Bucharest. The big boss on La Gomera is Paco (Agusti Villaronga), and with the help of Kiko (Antonio Buil), a master of the whistling language, and Gilda (Catrinel Marlon), a sensitive yet professional femme fatale worthy of a Rita Hayworth, they conspire to break Gilda’s boyfriend Zsolt (Sabin Tambrea) out of jail in Bucharest and make off with the hidden cash. Meanwhile, Cristi flies to La Gomera to learn the whistling language with Gilda’s help and gets caught up in a double, or redoubled game of espionage. Whistleblowing—something every character here deserves—quite literally keeps the bullets flying, with angry mobsters and corrupted cops taking turns. The bewildering plot is not important to follow, however, as Porumboiu’s point lies altogether elsewhere.

When the directors of the Nouvelle Vague decided to use the American film canon (John Ford, Howard Hawks, Alfred Hitchcock) in their films, the references served their own new cinematographic language as a means to break with the aesthetic norms the studio system had set up. However, for all the admiration Truffaut had for Hitchcock and the universal humanist language of Hollywood, he was also mercilessly critical towards it. In 1954 he wrote about The Searchers, that “John Ford symbolizes an age of Hollywood . . . when good health prevailed over intelligence, craftiness over sincerity. This age has gone.” Each generation of filmmakers has their particular need to drape cinema’s tropes, stars and genres in new robes which never seem to fit the measurements of those that came before. With The Whistlers, one of the fathers of the Romanian New Wave has tried to experiment in much the same way and incorporate his own cinematographic language—visual hyperrealism, deadpan humor and an incredible sense for the wondrous ways in which humans fail to communicate—into the genre of film noir. This works best with the whistling language, which none other than Porumboiu could have integrated into a crime thriller without risking ridicule. Nevertheless, the numerous references to American classics lack the subtlety of his best work (spoiler alert: a man tries to kill Gilda with a knife in the shower of a motel). In The Whistlers, things move fast; we can’t get hold of them. And so even the whistling scenes, ripe for the Porumboiu touch, are often sacrificed for the sake of keeping up with a fast-paced rhythm, at times compromising the humorous glance the director’s fans might expect. Those who remember the slow pace of the searching scenes in his last film, The Treasure, might recall that some of the funniest moments of the movie emerged from the seemingly endless “hunt” in which the hunt itself was the treasure. A similar case could be made for the whistling, which, had we explored it—the teaching and the practice of it patiently torturing us—could have revealed more about the characters than the pull of a gun.

At some point in the middle of the film, an American director shows up on the island claiming he’s there location-scouting for his new film. The gangsters get rid of him expediently—a funny touch if one considers that one of the latest Star Wars movies was shot on the Canary Islands, establishing a new film industry on the island and making it even harder for European directors such as Porumboiu to set their own cameras on shore. The years of preparation and the obstacles a European director might meet today in order to complete such a film cannot stay without mention. Big distribution companies arrive to vaunt their latest gem, but keen audiences won’t but wonder why it has been four years since The Treasure, and why Europe’s greatest directors must be resigned to produce even the hits at the rhythm of Europe’s bureaucracies.

Maybe Porumboiu’s statement with The Whistlers is that it’s time to enjoy filmmaking for as long as we can, share this passion with our fans and keep the rest (The Second Game, 2014; Infinite Football, 2018) to the festival circuit and/or distribution-free art world—two disparate poles of cinema that his first films so beautifully managed to combine. That said, such a film appearing in competition in Cannes might serve as a symbolic honoring of the director’s important contribution to the world of cinema today. Is Corneliu done with his past in order to address his work to wider audiences, or is this just a playful break, a kind of vacation from the gloomy streets of Bucharest?