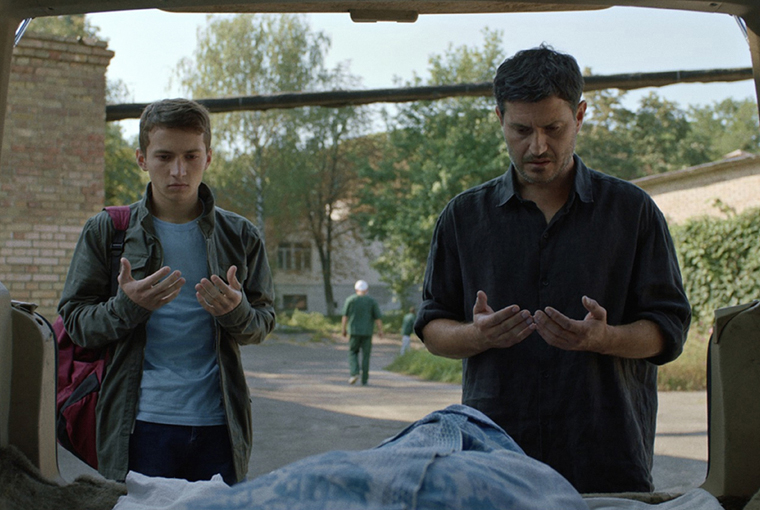 As the latest political crisis in Crimea that erupted in 2014 still feels recent, Homeward, the first feature film of Ukrainian director Nariman Aliev which premiered at the 72nd Cannes Film Festival, focuses on the open wounds of Crimean Tatars.

The film starts with the beautiful image of a still lake and then shifts directly to the cold inside of a morgue where Mustafa (Akhtem Seitablaev) and his youngest son Alim (Remzi Bilyalov) recognize the body of Alim’s older brother and Mustafa’s son, who was killed in the latest violent confrontation with Russia. Mustafa and Alim start a difficult journey from Kiev to Crimea, carrying the brother’s body in order to bury him in their ancestral homeland, ‘next to his mother’s grave’. In the next scene we see the main conflict of the film unravel. Mustafa, the father, who is a rather violent and patriarchal figure, rejects Olesya (Dariya Barihashvili), the dead brother’s fiancé. He pushes her around and finally locks her inside the house to stop her from coming with them to the funeral, as she is not ‘part of the family’. Tradition, religion, family and homeland are the four themes that construct this film.

Homeward follows the typical structure of a road movie where the actual journey of the main character symbolizes the internal conflict he faces throughout the film. Alim has just started studying journalism in a Kiev university. Tatar – the main language spoken on screen – being his mother tongue, he is also in the process of learning Ukrainian, when he has to abandon everything and return to Crimea with his father to stay there and mourn the dead for several months. The different settings of the road trip obtain a symbolic meaning: if Kiev stands for the present of our contemporary society, Crimea represents the past and the traditions that are gradually fading away. For Alim, going to Crimea equals accepting a certain heritage, accepting to be part of the tradition and religion of his ancestors as represented by his father. Returning to Kiev, on the other hand, symbolizes the choice to be part of a more modern, contemporary society where tradition and religion have lesser importance. This pragmatism of contemporary society is shown in the phrase of Olesya (the fiancé), when she says, protesting against this journey to Crimea: ‘why can’t we bury him anywhere? He is dead anyway’. This sacralization of the dead that exists both in tradition and religious rituals, is what the father is trying to preserve.

One thing we should examine is what kind of values this tradition holds. The director himself has stated that he wanted to start with the essentials, to show the importance of family values and the love for the homeland. The rejection of Olesya and the general violence that Mustafa, the father figure, expresses during the journey, are typical of a strict patriarchal family where women have a lesser place and violence is the proof of masculine authority. But, having stated this, it would be unjust to extensively insist on these aspects of patriarchy and authority that the father figure represents and that, in a certain way, do not come as a real shock to anyone. The violence presented in the film is not shown as being inherent to Mustafa’s character, but instead seems to be the consequence of a personal struggle to preserve a past which is gradually fading away. As a child, Mustafa had to abandon his ancestral home never to fully return, and his own sons seem to ignore both Crimea and Islamic religion (Tatars themselves have Turkic origins). The film shows the violent feeling of alienation and unfitness which follows the lives of people who are forced to abandon their homes, their fear of losing their roots and forgetting where they came from. Mustafa represents this frustration.

In his character, we can easily identify the experience caused by sudden and violent deportations or even population exchange, events that have reoccurred in recent history across Eastern Europe and the Balkan area. Turkey, Greece, Bulgaria, Countries of Ex-Yugoslavia, Northern Macedonia or Cyprus are countries where memories of forced displacements are still alive in the collective imaginary. The film explores exactly this anguish of feeling disconnected, and the extent that one would go to retrace one’s past. It shows the need to connect to a tradition, to be  part of a religious or social community (a family, for instance) and to feel that you have roots. This is what seems to justify Alim’s choice at the end of the film: to embrace his Tatar tradition by fully accepting his father, even the violent patriarchal sides of him.

The film touches on parts of Crimean political history, in particular the massive deportation of 1944, when 180 000 Tatars who were considered, at the time, to have collaborated with the Third Reich, were deported and allowed to return only after 1967. It is a similar history that the director probably has experienced himself as the child of a deported family. However, while he delivers a strong and personal film, both the scenario and the aesthetics have some weak points. Parts of the plot do not seem convincing and coherent, coming off as random events that were forced onto the film in order to perplex the viewer and add depth to the relationship between father and son. Some beautifully static shots of nature and lakes, which contain the symbolic element of crossing waters as part of the process of moving somewhere, are also not fully exploited. They are more like small details instead of organic elements of the film, functioning like an interlude to the dynamic shots which the rest of the film uses.

In a wider sense, we could see Homeward as a film about the construction of identities in relation to the absent. In this case, the absence of Crimea has over-determined the identity of the father figure. Crimea plays the role of a holy land. Going back is an abstract goal that conditions the life of the whole family. Even the secondary characters, Mustafa’s brother and his wife who decided to stay in Ukraine, are affected by the choice of not going back; in the film they are shown to be living in a small house next to the borders and the lake, seemingly in the middle of nowhere. Homeward highlights the complex and problematic situations that are created by the sudden displacement of populations, ruptures which are near-impossible to completely repair, and which affect not only individual people, but whole generations. In that sense, while the film is about the specific history of Crimean Tatars, we could also interpret it as a more general comment on people’s displacement between countries, especially pertinent to the present refugee situation in Europe, where people once more are forced to abandon their homeland and live their lives with its absence.