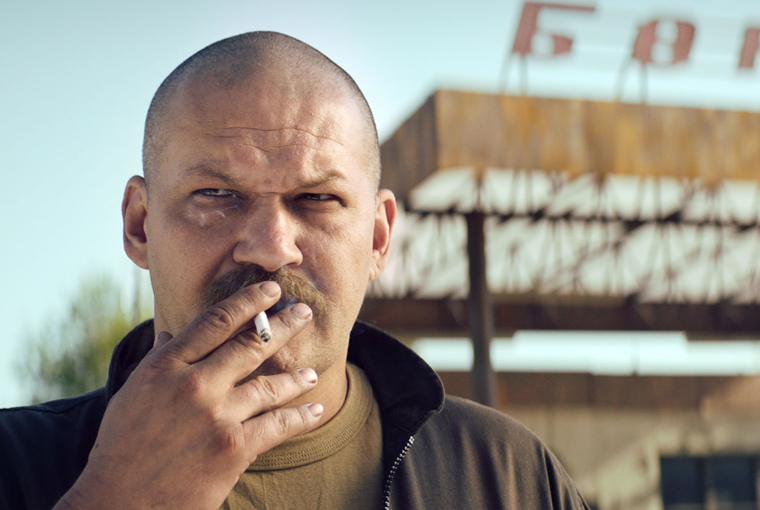 Ukrainian author Serhiy Jadan’s novel Vorochilovgrad was written in 2010, before the beginning of the 2013 conflict that would tear the country apart. The protagonist of the novel, who lives a cozy life in Kharkiv, a town in northwestern Ukraine, decides to return home after receiving a troubling call from his native town, Luhansk, in the Donbass. He heads east, making a road-trip of the return and taking along his two flatmates. In a meticulously detailed account, the author describes the thick traffic; long lines of cars heading down a never-ending road bordered by cornfields. Passing a small town, the traveling trio come across a traffic jam – the description of which is a great display of the author’s talent. He cleverly foreshadows the administrative and political chaos in the region using a simple metaphor about chicken and a car crash:

In the middle of the bridge, a truck has completely stopped the traffic in both directions. Cars are driving onto the bridge and finding themselves in a perfect trap: impossible to drive on and impossible to reverse. The drivers honk, the closest ones get out of their cars to see what is happening.

It’s an old delivery truck carrying poultry. It’s covered with feathers and leaves and full to bursting with cages. There are hundreds of cages, filled with large, clumsy birds, pecking and clawing at each other. The driver must have crashed into the metal fence which separates the pedestrian zone from the road, and the back of the truck has swerved to block the road. The uppermost cages have been scattered onto the asphalt and stunned chickens are milling around the vehicle, jumping onto the hoods of cars, standing on the fence and laying eggs under the wheels of trucks. The driver fled the site of the accident immediately, taking the keys with him. Two police officers are walking round and round the truck, not knowing what to do. They shoo away the chickens angrily, and question nearby motorists, trying to get any information they can. Testimonies are contradictory. Some say that the driver jumped off the bridge, others had seen him drive off in another truck, and others said in hushed tones that the truck had been running without a driver. At a loss, the officers shrugged their shoulders and tried in vain to contact their superior on the radio.1

The characters in the novel will soon find themselves in their own “perfect trap”. German, the protagonist, will be caught up in complicated schemes involving insolent oligarchs, the sly local mafia, small-time crooks and vodka-inebriated locals. No-one seems willing to take responsibility for anything in such unstable times. The popularity of the book in Ukraine (among its decorations is the Jan Michalski Prize for Literature in Switzerland) is understandable: it is funny, it’s a smooth read, and it reveals a zeitgeist of gloom and impending trouble.

In 2018, Yaroslav Lodygin made a film based on this novel, undoubtedly hoping to play on its success. He called it The Wild Fields, and co-wrote the script with Serhiy Jadan. Making a film out of a novel is always difficult, and making one out of a cult-classic less than ten years after its release especially so, even with the author on your side. The Wild Fields was released in Ukraine in November 2018 and received largely negative reviews. The film recently played on the opening night of the Ukrainian film festival in Paris, at the Grand Rex. The very Ukrainian audience really wanted to enjoy the film; the need was almost tangible. Near the beginning of the evening, when German complains about politicians because “they’re all the same – useless”, they break into spontaneous applause.

Language plays an interesting part in The Wild Fields. Most of the characters speak surzhyk – a fusion of Russian and Ukrainian commonly spoken in the Donbass. One can therefore differentiate the more highly educated characters, who speak Russian or Ukrainian, from the peasants. As is often the case, I suspect I missed out on many subtleties because of my lack of ability to distinguish between these languages. There is one particularly confounding scene which takes place on the Russian border, in which German boards an unusual train. His ensuing adventures with the scar-faced evil James-Bond-style character were a mystery to me.

At times, The Wild Fields feeds off details from the novel successfully, as when it portrays a few well-placed items, taking pride of place on the driver’s dashboard: a chicken claw swaying in the dirty window, images of Stalin and of various saints. As they travel east, the roads become more and more potholed. The driver ends up asleep at the wheel. German arrives at his family petrol station, only to find his brother has left, forced to leave by threats from local mafia groups. They are threatened by one group in particular, which is trying to take over the family land. Their leader is a con-artist and wants to try and get his way at any price. He is playing the part of a bad actor. At one point he goes onto a public bridge to have a private discussion with German, and his two bodyguards stand, one on either end of the bridge, to block it off, while a queue of interested pedestrians forms – women with pushchairs, runners, all pushing to cross the bridge.

Like many Ukrainian films from recent years (cf. Volcano by Roman Bondarchuk), the film follows the conventions of a Western. It deals with the new frontier and its unruliness, contains some mystical elements, and cumulates in a shootout. Here, it comes down to German and his two friends to protect their land against a group of thugs and their hired goons who turn up with tractors to knock down their property. The film gets a little over the top as various groups of people come to help each side, ending in a stand-off of gigantic proportions. The excellent soundtrack, mostly written by pianist Fima Chupakhin, gives a real boost to this atmosphere though.

In the novel, German gives literary names to people around him. His cantankerous landlord is nicknamed Dostoevsky. In the film, only one of the characters gets to keep the nickname, his friend Tolstoy. Tolstoy is brave and surprising, getting his friends out of a dangerous situation when they are threatened by a group of scythe-wielding farmers, using his new-age yogic techniques in the middle of the bleak cornfields.

Newly elected president Volodymyr Zelensky provides a startling example of the way that influences stretch between politics and the screen. The success of Vorochilovgrad coincided with huge changes in the country, and as the Maidan protests raged, the book hit best-seller lists in Kyiv. The film version was released in 2018, and it’s no big surprise that a story about a yuppie with a comfortable job in the city who comes to save a small piece of land from the local mafia, doesn’t quite hit the same sweet spot that it did in the early 2010s. At screenings of Ukrainian films around the world in 2019, we’re still holding up #freeolegsenstov signs and the Ukrainian director Senstov has now been imprisoned for more than five years (he was first detained in May 2014) – it’s unsurprising that some of the optimism of those years has worn off. Perhaps Lodygin came at the wrong time, but by some standards, he can just count himself lucky. 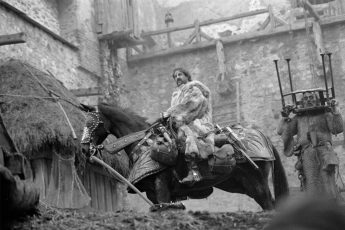