Mating Season in the Slaughterhouse 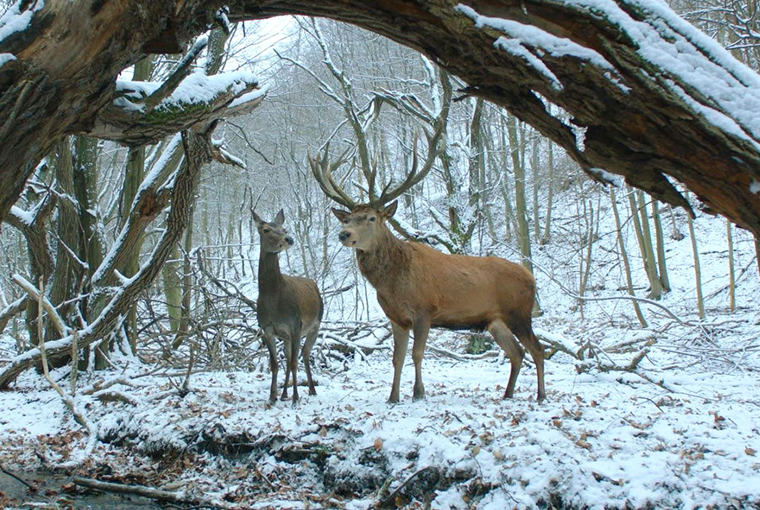 Two deer touch noses tenderly in a picturesque wintry forest-scape. Meanwhile, back in less idyllic urban reality, obsessively pristine and socially awkward Maria (Alexandra Borbély) joins a Budapest slaughter house as quality control manager, catching the eye of financial director Endre (Morcsányi Géza). Their first encounter ends disastrously, with Endre’s attempts at familiarity being met by Maria’s brutal frankness. However, this trait is subsequently revealed to be a frustrating and compulsive self-defense mechanism that Maria is unable to control. The two keep a distance from one another, until an amusing scandal breaks out in the abattoir when someone pilfers a batch of mating stimulant for bulls. Slightly illogically, the police suggest employing the help of a psychologist (Réka Tenki) to profile each of the employees and pin down the likely suspects. When asked about their dreams from the previous night, both Endre and Maria’s descriptions match to the tiniest detail. They are both in the forest, foraging for sustenance, one as a doe the other as a buck. Gradually and hesitantly, they come to acknowledge the bizarre fact that they meet every night in their dreams. Next begins the problematic task of initiating a romantic relationship.

Ildiko Enyedi’s film has many commendable qualities, the most obvious being its originality. Although On Body and Soul ultimately ends up following a fairly simple, classical narrative, at least the set-up is intriguing, and briefly tantalizes with the idea that it might not go down the expected route (although this also adds to the disappointment when it eventually does). The balance between the dream and empirical worlds is also carefully weighted, without overly insisting on the deer, which actually have little to offer to the momentum of the movie once the great revelation has taken place. The film manages to combine tenderly funny moments with instances of brutal shock. Continuing what seems to be a Hungarian fascination with the bodily, and especially the body deconstructed, viewers are forced to confront the gory reality of how cows become meat. In addition to providing an interesting juxtaposition to what is essentially a high-brow rom-com, the scenes in the slaughterhouse also elaborate on the theme of the animalistic in relation to the human introduced by the deer. Moreover, it provides an opportunity for insight into the psychology of the characters by showing their responses to the environment, such as Maria’s inhumanly rational indifference and Endre’s acknowledgement of the importance of maintaining empathy in extreme conditions.

Structurally, however, the film could stand some fine-tuning. It introduces several promising and engaging narrative strands – the dream world, the mystery of the missing bull stimulant, the budding romance and the subsequent Grease-style “You’re the One that I Want” transformation arch – but as they are all more or less staggered they have the effect of dragging the film out. This is especially the case with the investigative story of the stolen sex aid, which could have made an entertaining film on its own, but which is resolved quite suddenly. While the outcome fits with the themes of emasculation and sexuality as a marker of self-worth (it turns out to have been perpetrated by a cuckold), it falls flat in terms of narrative tension, however.

The contrasting of the two star-crossed lovers can also be gratingly simplistic and forced at times. Maria’s apartment is an immaculate temple of Ikea minimalism, as meticulously ordered and cold as her life in general. Endre is messy, old-fashioned and prefers to inhabit a noisy part of town. Despite already being abundantly clear, this dichotomy is reiterated through numerous carefully composed montages where the two are engaged in the same activity equally and oppositely in pristinely composed close-ups. While this is amusing to a certain extent, more often the advert-style aesthetics employed prove distracting and irritating. Especially towards the end, the use of visual one-liners becomes massively excessive and reveals the film’s uncomfortably hybrid nature. Had the entire piece been made in this style it would at least be coherently patronizing, but, as it stands, it detracts from the subtler, more nuanced elements.

There is also an uneasy imbalance in the depiction of the two protagonists. Maria is dysfunctional to a cartoonish extent, so much so that it seems highly implausible that she would actually be able to subsist in real life. When she finally makes the conscious decision to start a relationship with Endre, she is the one who has to conform. Again, there is humor in these sequences, but it is slightly wince-inducing and exaggeratedly crude. Meanwhile, Endre’s counterbalancing flaw is a deformed arm, which is actually shown sparingly throughout the film and dealt with quite sympathetically. While Maria is completely sexually inexperienced, the film goes to great lengths to establish Endre’s backstory, according to which he was actually quite a stud and only “retired from the game” after seemingly being worn out by a superfluity of women. This may also be a case of simple ying-and-yang comparison, but it doesn’t seem particularly fair. Most damningly, he doesn’t undergo any transformation parallel to Maria’s, rather in narrative terms the only challenge he overcomes involves learning to accept her flaws, a task that doesn’t seem so herculean given her impeccable beauty and the 30 years of age difference. This differential treatment is also continued in the representation of their bodies, as Maria is exposed in an extremely intimate manner, almost inside out, while Endre experiences no such visual scrutiny.

On Body and Soul offers glimpses of greatness and visual audacity (it is a rare feat to be able to cause your audience members to pass out), as well as much needed imagination, and ultimately this will probably negate the more questionable, muddled aspects for most viewers. Hopefully, however, next time Enyedi will have the confidence to push things further, or at least not waste intriguing concepts by mashing them together needlessly.