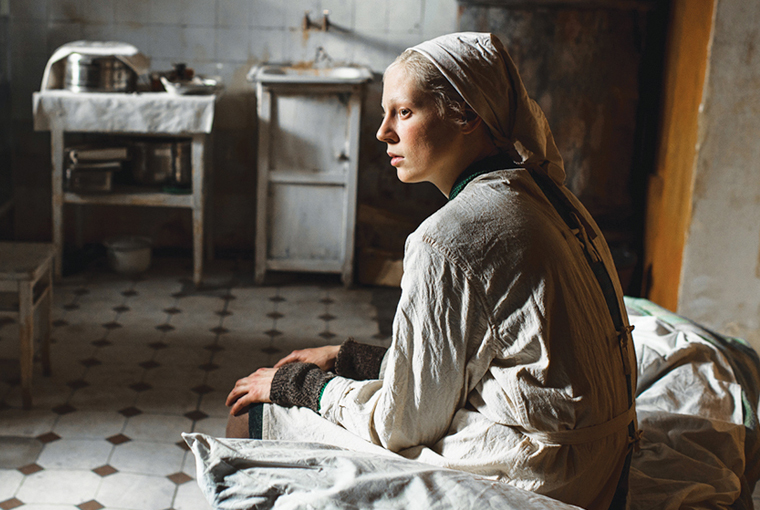 For those of you familiar with young Balagov’s promise to his mentor Alexander Sokurov to never film violence (with an exception made for his 2017 debut, Closeness), Beanpole will seem like the most intelligent fathomable maneuver to both keep, and ultimately break, that promise. Beanpole is a film about the violence of war that manages to depict neither war nor violence.

Balagov’s main characters are two young women who survived the battle of Leningrad. Tall and skinny, hence her nickname “Beanpole”, Iya (Viktoria Mironshnichenko) works as a nurse in a hospital for war veterans. Already standing out with her lanky physique, her unexpected tics and fits of creepy glottal sounds – symptoms of serious post-traumatic stress – make her appear even more odd. Iya is also taking care of a child, who we soon learn belongs to her best friend Masha (Vasilisa Perelygina). Both girls were stationed at the front, but Masha decided to remain there longer in order to avenge the killing of her lover (or one of her lovers), leaving her child with Iya. Before Masha returns, her little boy, Pashka, dies, or is rather assassinated by his foster mother, Iya, in one of the most breath-taking scenes of the film.

The way in which this murder is filmed seems to come out of Balagov’s (or his master’s) special relationship with the spectacle of violence. Little Pashka, playful yet pestering, leads Iya into what looks like innocent play. Their silly twists find them on the floor, with the mother lying above the little boy and squeezing, or maybe kissing him; little do we suspect that something terrible is about to happen, when Pasha asks his mother to stop. Her tic strikes, she seizes, and ends up suffocating the little boy on the floor. As the child gently takes his last breath, we see his grip on her back slowly loosen as he falls unconscious. We do not see his face, nor Iya’s, for that matter; we never know whether there was intent. The entire scene, horrifying in itself, plays out very smoothly, almost sensually, however, and the overriding ambiguity of whose pain was greater—that of the dying child, or the convulsing mother—distances it from the theater of cruelty. As a reflection on the violence of war, it can also be considered radically opposed to the cinematographic approach of directors like Sergei Loznitsa, whose feature films have all gone down the road of “violence as spectacle” (Donbass, 2018). Here, Balagov opted for a more sensual kind of cinema, in which the effects of war are to be felt rather than seen.

After the death of the boy, Masha relies on the potential of a second child to keep her coping with the present and hoping for the future. For this purpose (spoiler alert!) she selfishly asks Iya to carry the child for her, as proof of her love. Decisions, compromises and actions at this stage of the film put forward issues of self-obsession, morality and desperation in a way that is not often seen in cinema, admitting the partial exception of Russia. Nevertheless, Balagov breaks with yet another clichéd tradition of his fellow filmmakers. Motherhood is depicted here as an illusion rather than as an act of hope; indeed, for Masha, the trope of the saint-like mother turns into a self-destructive obsession. And so Balagov proceeds by laying bare the responsibilities that a world dominated by men with guns and uniforms has laid on women, the symbolic and literal carriers of hope. Again, the violence and sorrow this implies are largely invisible, disguised behind a diktat of sublimity. A more psychoanalytically friendly reviewer may read the “filicide” as “female hysteria”, but Balagov, consciously or not, stages a story where the illusion of motherhood as salvation from a wrecked world is revealed to be a sign of helpless desperation. It is also an impossibility, as Masha is not capable of getting pregnant again due to the multiple abortions she’s suffered. Yet she still thinks that the arrival of a child will save her soul. In a way, Balagov paints the tragedy like a Vermeer (there are a lot of sublime women doing mundane things next to windows in this movie), uncovering the violence that arises when such representations are imposed, or transposed, on us as lifestyles.

The beauty of this second feature does not rely so much on the story as it does on specific aesthetic choices. For the most part, we follow the characters in the huis-clos of the hospital or the girls’ house, which seem as suffocating as their lives. Beanpole makes Balagov a “good student”, as it succeeds in speaking about the psychological violence of war without shedding a drop of blood. Violence is not about the moment of the trauma, but about what it leaves behind in people and in nations. The only East European production in its section at Cannes (Un Certain Regard), and one of the very few in this year’s festival, Beanpole speaks about today as much as it speaks about the past. With Un Certain Regard’s Best Director award at the 72nd International Film Festival of Cannes, Beanpole is a complete work from promising new spawn that’s growing among the masters of the vast sea of contemporary Russian cinema.