The Rock Cliff With the Fallen Cross 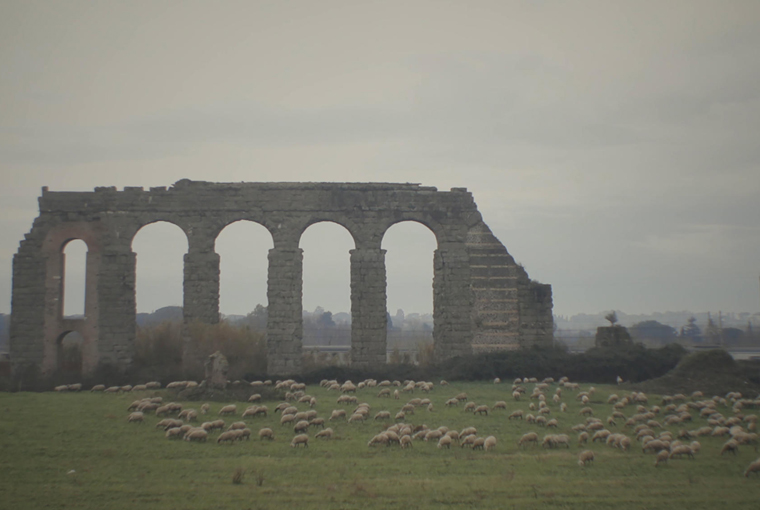 We are shooting a film about graveyards and musicians” – a line uttered by one of the musicians participating in Daniil Zinchenko’s documentary – would be an accurate synopsis for the entirety of Tinnitus, if it weren’t for its bold creative ending which offers a quasi–mystical experience to the viewers and which compensates for the fact that it mostly follows a tried approach up to that point. The musicians portrayed in the film, who were all active in the 1990s Moscow underground scene, seem to be what is left of a once powerful and radical artistic community. One of the questions that has united them is, “how does death sound?”. Through the film’s sound design, which includes original sound pieces from the 90s, more recent ones and even a distorted cover of Britney Spears, the film itself becomes a piece in this puzzle.

The passage from life to death is a process that fascinates many. From 19th-century ruminations on suicide à la Dostoevsky to post-WWII nihilism, death is a reoccurring subject matter of artists and intellectuals. However, how one can in fact address death as a meaningful subject matter, is a question with no answer. Death is forever unknown to man, perforce separated from human subjectivity. Or, as Epicurus put it: “If I am, then Death is not. If Death is, then I am not”. Any creative approach to addressing death is therefore doomed to reflect a search in pitch darkness, an experimental, fragmented journey with no possible destination. The musicians portrayed in Tinnnitus seem to embark on this very journey through musical experimentation and poetry. Their compositions, which are integrated in the film’s sound design, are full of abstract distorted representations of natural sounds, using extremely high and low pitches or simply noises that create a strange and cold musical ambiance.

If, however, death as a state is by default separated from human subjectivity, humans’ attitude towards and relationship with death are much more concrete. The film follows the story of a man who struggled with his girlfriend and then thinks only of a song moments before he kills himself. He writes in his suicide note that this is the song to be played at his funeral. Another story is that of man who, on the verge of existential crisis, records himself having sex with a young woman’s corpse. Music, or more precisely sound, plays a key role in the relationship that humans have with death, Zinchenko suggests. In the documentary, one musician is swallowed by waves. An abstract image that we see repeatedly in the film, a rock with a fallen cross over sea waves and a vacuum-like soundtrack that perhaps represents the void, is the way that the director chooses to portray this state of death. He suggests that there are certain things better transmitted indirectly, through aural association.

A good part of this artistic exploration seems to be directed towards an understanding of these relations. Suicide and murder, or sexual perversions with corpses, are included qua existing relations people have with death. The documentary presents quite vivid and detailed descriptions of necrophiliac, near-death and pre-murder experiences, all of which remain only borderline disturbing, never truly crossing the viewer’s personal boundaries. This is due to the fact that Zinchenko appears to approach them out of genuine curiosity. They exist and so he feels he must reflect on them.

The film’s formal approach, much like the exploration of the concept of Death, seems to be quite a fragmented, aimless journey. Scenes of pure documentary realism, which often adopt TV reportage aesthetics, are followed by near-silent scenes of sea waves or Russian forests, only to be interrupted by archival footage taken from the 90s performances. Clearly the documentary is not aiming towards a concrete destination.

Over time, we observe how death poetry and musical necromancy coexist with the actual death of some musicians. As this particular artistic community seems to fall apart over the years, the film takes the liberty of breaking certain rules. The film ends with a 30-min live performance that takes place inside a forest. A DJ performs a symphony of electronic sounds that resembles the buzzing effect that we feel when ears hurt or when we suffer from tinnitus. The viewer has no choice but to observe this still image (which almost seems frozen) passively, as her body inevitably reacts to the high pitch sounds, either through discomfort, or through relaxation provoked by sound-hypnosis. The image itself is distorted, the camera lenses make the trees seem blurry around the corners of the screen and you might even question your vision at one point. Mild hallucinations are a possibility, part of your brain efforts trying to project meaning onto the screen, much like when we watch a white screen for more than a couple of minutes. In this case these mild hallucinations affect your hearing, they trick your mind into listening to sounds that are probably not even there. 30 minutes later, the film simply ends. The performance is replaced by a dark image of the same forest. The closing credits roll to soft, natural sounds. This choice is a powerful passage from being active and engaged to simply not being there anymore. It seems more like a moment of relief, with few notes of sadness, something like the end of a long and tiring day.

This last scene echoes the film’s topic quite brilliantly, and it is a pity that there was no opportunity to resort to similar choices throughout the film. Instead of the collage of different elements that we see during a good part of the film, a complex interaction between filmic language and sound could have offered an authentic relation to the original material of the 90s musical pieces. The documentary definitely had the potential to be more than historical narration that is interrupted by a few creative elements. It is, after all, “supposed to be the first one dedicated to music as an instrument for death exploration”. In fact, it mostly assumes a descriptive role, when its bold moments reveal that a more active role in this complex journey towards the frontiers of human understanding might have been within reach. 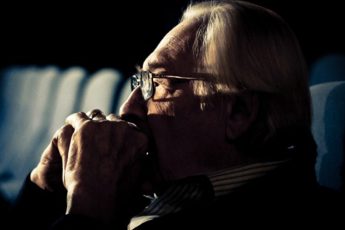 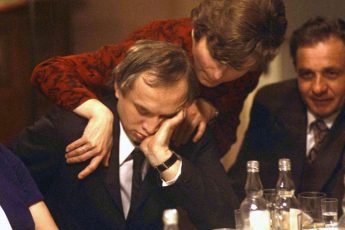