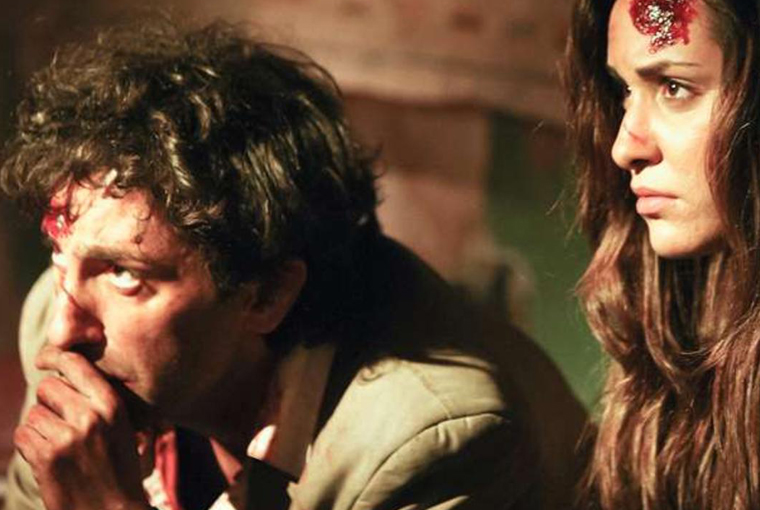 Garib (Zaza Bejashvili), the unfortunate protagonist of Ilgar Safat’s The Precinct, is a successful photographer in Baku who shoots nudes for magazines and who uses the intimate setting of his home studio for short-lived affairs with his models. Flashbacks of Garib’s youth introduced later in the film reveal the photographer’s troubled relationship with the methods of his profession. As a young boy he earned some money clandestinely developing nude portraits for a neighborhood gang, which turned into a traumatic experience when they coerced him into shooting pornographic depictions of his childhood sweetheart. Now, however, Garib wants to leave his murky past behind and lead a conjugal life with his fiancé, the sculptor Sabina (Melissa Pappel). But his marriage plans are threatened when he gets a lucrative job offer for a London-based company in Africa.

The Precinct kicks off as a romantic drama with Sabina feebly playing the role of the offended lover. A fight in the car has Garib and Sabina miss a curve in the road and drive off a clip. They end up in an obscure police station – the precinct – where Kafkaesque employees seem to know every detail of Garib’s sexual past which they use to slander him with dubious charges. The movie’s romantic plot recedes into the background, making sway for a more absurdist psychological conflict between Garib and the sadist police officers who appear to be nightmarish impersonations of his super-ego. “You don’t understand, we’re in purgatory”, one of the officers says. The harrowing scenes in the precinct are without a doubt the most convincing, and for a moment the movie promises to develop into an anti-realist experiment reminiscent of the more pessimistic writers of the Theatre of the Absurd.

Too bad that Ilgar Safat introduces another stylistic and narrative break with extensive flashbacks of Garib’s youth, which include a film club screening of early Azerbaijani reels of Baku and the discovery of a treasure trove containing antique photographic plates. These excursions in the history of Azerbaijani cinema take time and come to overshadow Garib’s troubled childhood, which, the pornographic pictures aside, really doesn’t appear to be that troubled at all. Sadly, the calm realism in which his childhood is cast, undermines the irrational aspects of his guilty conscience as an adult. The imaginary purgatory was convincing precisely because the charges it pressed, like Garib’s wish to get married, were not supposed to make sense. Oddly enough, inserting an explanatory episode from childhood prove the sadist police officers right. Is he guilty or not?

The Precinct’s short, yet creative dreamlike sequence and absurd psychological power play in the police station unhappily clash with the soft realism of the movie-within-a-movie. While the latter starkly resembles recent Azerbaidjani explorations in neo-realism (Elvin Adigozel and Ru Hasanov’s Chameleon (2013)), the originality of the former could have developed into a truly absurdist drama, for instance in the manner of Kazakh helmer Adilkhan Yerzhanov’s recent pics. It is a pity that the few Azerbaijani films promising a stylistic difference, with Elçin Musaoğlu’s The 40th Door (2009) being another example, always end up reverting to the conventional art-house realism instead of sticking to their own aesthetic intuitions.