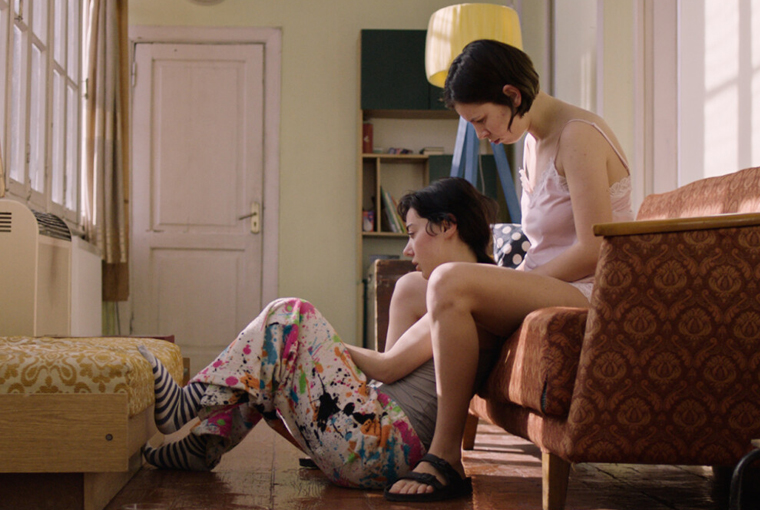 With his second film, A Room of My Own, Ioseb ‘Soso’ Bliadze returns to themes of financial precarity and negotiating tough social situations. The film screened in the main competition at Yerevan’s Golden Apricot film festival and is a tonal follow-up to his feature-length debut Otar’s Death (2021). With just a year apart, these two films are equally drenched in uncertainties and share the anxiety of not knowing what tomorrow will bring to an already shaky present. In A Room of My Own, the right to privacy and even more so – a private space, a room – is never a given. Teased out in tribute to Virginia Woolf’s infamous essay “A Room of One’s Own,” the film’s title may already be giving away the narrative premise as well as the potential outcome, but Bliadze’s use of spatial relationships (of lived spaces, of neighboring buildings, of bodies) suggests a more expansive way of thinking about the self.

Taki Mumladze (who also co-wrote the screenplay) plays Tina, a mysteriously quiet 24-year-old who likes to keep herself at a distance. It’s clear from the get-go that her veil of solemn shyness is owed to a secretive trauma betrayed only by her curious gaze. In a fish-out-of-water situation, Tina is stuck with a loud and rowdy roommate. Megi (Mariam Khundadze) is a people’s person, a beloved host to pandemic parties, and dreams of leaving Georgia for the US. Tragic undertones can also be gleaned from her bubbly character, such as the matter-of-fact way she addresses the recurrence of her fainting spells, or the aggression simmering in her voice whenever money is mentioned. Tina, it seems, also does not have any financial stability or no way to afford her rent at present – a generous amount of the film’s time passes before we learn she has been discarded by two patriarchal families: that of her husband, and out of her own.

Shot by Bliadze’s now regular DoP Dimitri Dito Dekanosidze with gorgeous handheld strokes, A Room of My Own caresses its two protagonists as they go from strangers to friends to lovers in a tender and compassionate progression. As Tina is seen triggered by markers of togetherness exhibited by temporary or devoted couples in a COVID-isolated Tbilisi, her lifeline is agonizingly non-physical – daily, awkward phone calls by a boyfriend who seems to care less and less. In this lonely setting, Bliadze shines a light for his protagonist in the form of a bright fire. Megi does indeed burn and dazzle and Khundadze embodies her with superb ease: the film then plays out as a slow dance of a step forward and two steps back as the women navigate unarticulated passions alongside their personal traumas, but they do so together.

It would be quite reductive to label the film an ‘ode to friendship’ since it is clearly (if slowly) making its way to an LGBTQ+ point, and while Tina’s liberation peaks at the same time as she’s seen having sex with Megi, Bliadze cannot be further away from queer-baiting. On the contrary, the chemistry between the two women suggests that rather than a (heterocentric) stage of ‘trying things’, this relationship has been transformational for both of them. What’s left unspoken is the political unrest in Georgia, marginalized as a suggestive backdrop but voiced strongly enough to highlight the urgency of the main couple’s own searching. At times, A Room of My Own does thin out, overusing gatherings and party conversations to make obvious points about its characters and their place in the socium at the expense of, for example, Tina’s familial backstory – which is laden with guilt, shame, and violence. Director Bliadze has a knack for tonal ambiguity and for building up lively, vibrant characters who are able to lift each other up in the dourest of times, and his second film affirms a promising path ahead, perhaps mapping out the lives of Tbilisi residents one room at a time.