Serbian "love me, love me not" 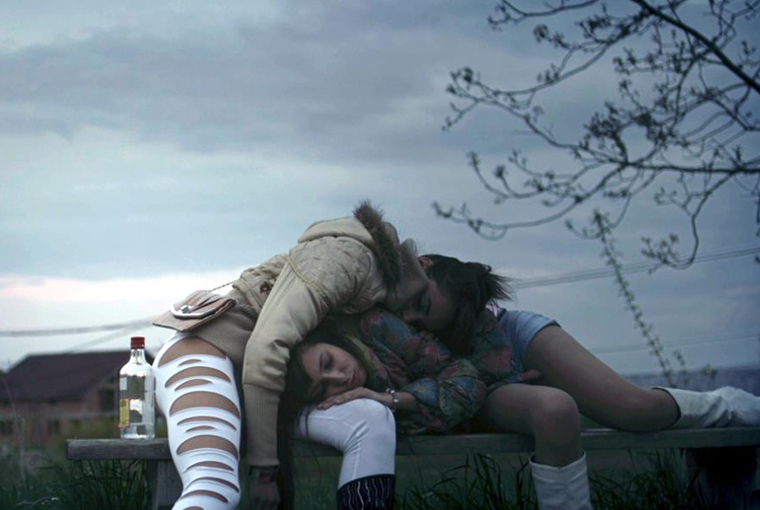 Maja Miloš’ first feature is a very bold film about teenagers. But don’t mistake it as a Serbian version of Larry Clark’s Kids. This film is intended to be a love story, as troubled as young love can be. It tells the story of 15 year-old Jasna and of the relationship she has with her friends and family, including her feeble mother and a seriously ill father.

Jasna and her girlfriends are hypersexualised. Seeking for boys’ attention, their routine is all about skimpy outfits, alcohol and drugs. They film all this with their mobile phones – which gives the film a title, Clip, just like the amateur clips of teenagers that are so popular on the internet. But while trying to attract her beloved Djordje, Jasna has to deal with the reality of her family: her father is apparently dying, and at least for her mother, it is as if he was already gone.

Jasna unconsciously reacts to her family situation, and it is reflected not only in her common behaviour – where anger plays a major part – but also in the way she relates to boys. Her way to try to get Djordje’s attention is through sex. Filmed sex, explicit sex. Here we find the most polemic choice of film.

Miloš refuses the conventions of American cinema where sex in general, and especially among teenagers, is something that remains under the sheets. In Clip, nudity and explicit sex are no taboo. This can seem shocking at first, mainly because it involves such young people, but in a context where violence, alcohol and drug abuse are the rule, it surely does not seem out of place.

Teenage angst blossoms in Clip. But the teenagers do not seem to act out of rebellion. They react to their family’s situation, to the environment they’re in, to the models media imposes – in the latter case, adopting this model in an almost naive fashion. In the end, their behavior is hyperbolic. Their emotions surface with impressive strength.

The film’s style is realistic, and one can feel the influence of documentary. If the girls are hypersexualized, especially Jasna’s relationships – and sexual relations – are also hyper-realistic. The possibly shocking images can be explained because of the excessivity that connects them.

Eventually, Jasna grows up; she finally gains Djordje’s abusive love. In fact, here, love me or love me not is not a children’s game. Love – family’s love or the significant other’s – is part of a coming of age tale. It’s full of sound and fury, signifying the growth of a young woman.