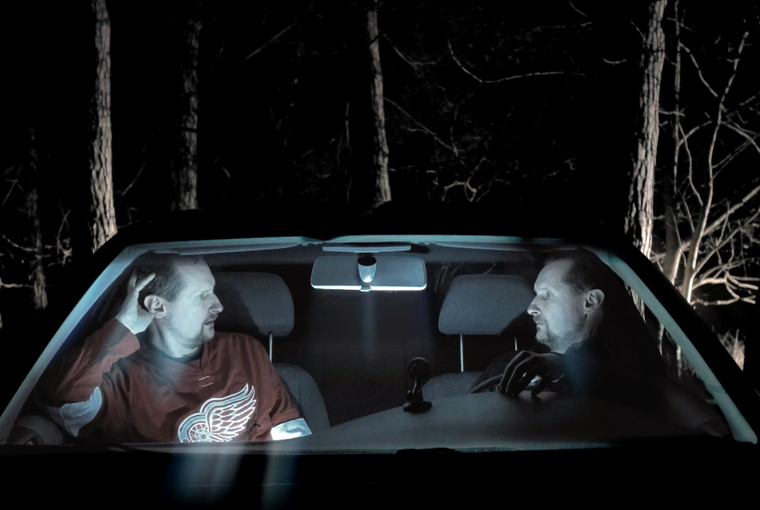 Near the end of his self-portrait documentary, Marek Kuboš stages his own death in a snowy forest. He does this by cutting together a scene from one of his unfinished films with new footage. A hunter fires a loaded shotgun into a grove of trees in a shot taken from And Everything Is as it Should Be (year unknown), while the director falls to his knees in new footage produced for Last Self-Portrait (2017). Fatally hit, he keels over in the trees, his ambition killed by work unfinished.

The staging is not dramatic or supposed to feel real. This purely symbolic death is about both rebirth and self-punishment. The former is the feature’s dominant theme, as it documents the reasons for Kuboš’s decision to transition from documentary filmmaking to fiction. The latter illustrates the director’s self-blame for his lack of success and is expressed through a criticism of both material and especially self-imposed moral constraints.

The 48-year-old director, who hails from Slovakia, was a prolific documentary-maker in the 1990s, but this is his first film in 13 years. In his 20s and 30s he made mainly black-and-white documentaries about local phenomena, such as A Photographer’s Journey (1993), Train Station 2nd Class Kraľovany (1998) and Voice 98 (1999). We are presented with a heavy dose of footage from these films, milky black-and-white images that are immediately captivating. The director/subject takes us into his attic to show us his prizes and catalogue entries for the aforementioned documentaries. Aside from this direct glimpse, we see him very little. It’s what the French would call a portrait en creux, a portrait in which we must read between the lines.

Kuboš delves into his past, talking about his journey to become a documentary filmmaker. He gave up his scientific studies as a teenager and, against his mother’s wishes, went to film school in Slovakia. In one scene, he goes to visit his old dorm room. He promises the teenagers who live there that if they film him sleeping in one of their beds, he’ll tell them a story. So the teenagers reluctantly shut off their computers and Kuboš gets into a pair of long pajamas and climbs into the small dorm-bed, his long figure strangely boyish in this simulacrum of sleep. “Simulate a morning”, he tells them, and awkwardly, they get out some rods which look like Star Wars light-sabres to gradually bring some light to the room. This is one of the many scenes in which the film rests at a precarious balance between creepy, sad and funny. But it manages to do so in such a delightful way that one wants to keep watching. When Kuboš finally, reluctantly, “wakes up”, he tells the boys about how he decided to become a filmmaker.

After telling the story, he gets up from the bed and leaves his old dorm-room, undoubtedly to the relief of the kids. Kuboš performs these “exiting moments” several times in the movie. He emerges from an old closet several times, and intercuts this with footage of another unreleased film he tried to make about a junk shop in Bratislava. The people who used to sell their fascinating items refused to appear in the film.

The aforementioned death performance corresponds with the exit moments in the retelling of his life. He is constantly questioning the limits of documentary filmmaking, deliberating what you can show and what you can’t show. In numerous interviews with other well-known Slovak directors, he asks about the limits of documentary filmmaking. For Kuboš, it’s clearly limited in two ways. Firstly because of the way that people’s perception of individual freedom has changed. He goes back to meet some protagonists he filmed in the 90s to ask them whether they would still agree to be in a documentary today. Nearly all say that they wouldn’t. Besides, the rules have changed about what you can show and what you can’t. One woman who works at the sales counter of a train station explains how you are no longer able to show the cash-register.

The other hindrance to his career have been moral questions. A touching moment sees him talking with a subject from a film which made people hate the character, whom Kuboš calls a “negative protagonist”. While he was editing it, he said, “my soul felt so small”. His desire to film outcasts and loners has been a burden. Distressing footage of an alcoholic neighbor who since died reinforces the point. He also admits to his fellow directors that even if he could, he would be unwilling to make a film which could get people in trouble.

When Kuboš was studying at the Academy of Performing Arts in Bratislava, he was asked to make a self-portrait. Extracts of this first attempt flood his computer screen, and we see the back of his head. In it, he plays air guitar and stands crookedly in a front yard in some suburban countryside. What’s most impressive about this film is how someone managed to be so vulnerable under the gaze of his own camera. All the filmmakers have different moral limits, and now Kuboš is only willing to test these limits with himself. 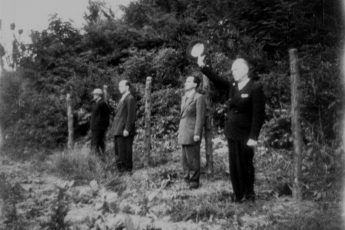