First of All, Felicia is Razvan Radulescu’s debut as (co-)director. One of the most important individuals of the so-called Romanian New Wave, he is the prolific screenwriter of important films of the young Romanian generation such as The Death of Mr. Lăzărescu, The Paper Will Be Blue and Tuesday after Christmas. This time, he shares the authorship of his film with his Dutch wife, Melissa De Raaf. The result is, as one would expect, a poignant and mature work.

Felicia has been living in Holland for 19 years – since the Romanian revolution – and has built a life in that country. In Holland, she has a job, an ex-husband, and a child. From time to time, she comes to Romania to visit her family who has stayed behind. The film depicts the last day of one of these visits.

The film builds up tension through the exposition of small details: the recklessness of the sister, the difficult communication – by cell-phone – between Felicia and her ex-husband Marteen and, moreover, on the overwhelming attention of Felicia’s mother. Being an independent woman, Felicia rejects her mother’s help whilst trying to stay on good terms with her. After all, the rapport with her family is strained… even on this last day.

But things do not turn out as planned: Felicia misses her flight and is forced to stay longer at the airport, trying to find an alternative way to get back to Holland, whilst arguing with her ex-husband about picking up their child from a summer camp. Her mother is by her side the whole time, “trying to help”, something that makes Felicia snap, because she would rather be by herself.

At its core, this film goes beyond the mere portrayal of the difficult relationship between mother and daughter. Felicia’s mother wants to return to her maternal role, trying therefore to put herself in a “useful” position, seeking to influence all of her daughter’s decisions. This is a story about a return from exile, and how it clashes with family life.

As Atmane Aggoun (2002) puts it, once a member of the family is exiled, the family that stays behind develops new dynamics, that exclude the expatriate, or at least diminishes the importance of the departed member. This posture is seen in the recklessness of Felicia’s sister, Iulia, who, without a proper explanation, refuses to take her to the airport. Meanwhile, the mother doesn’t know how to deal with Felicia. She is a dominant mother who doesn’t seem to realize her daughter is already an adult, with a different mindset, molded by almost twenty years abroad. Felicia is important, but her role in the family remains undefined.

Still following Aggoun’s arguments, one can say that this role is no longer that of a family member. To her mother, she is a guest and has to be treated like one, with all the subsequent honors that this new status demands. Still, these “honors” are pervasive, since, in essence, her mother remains in her maternal role. But that is a role of a mother of a young woman: the one Felicia had when she left. Here we have both the experiences of the “out of place”, for Felicia, and of the “out of time”, for her mother.

Felicia is central in this story, and for her mother – who behaves like a teenager’s mother, protecting her nest – her daughter/guest comes first. At the same time, as it is clear at the end of the film, this is not actually true. Believing she is prioritizing Felicia, her mother is actually invading her daughter’s privacy. It is up to Felicia to put herself in a position where she comes “first of all”, and this seems almost impossible with her family’s pressure.

First of All, Felicia is, in a Romanian “New Wave” style, a small story about two larger themes that intertwine: the mother/ daughter relationship, and the return of the expatriates. Radulescu and DeRaaf treat these two issues via the use of a number of subtitles in the film. The force is in the powerful, although seemingly casual, dialogues and the camera work that gives us the dimension of the chaos Felicia is involved in. This is a little known work of contemporary Romanian cinema that deserves wider attention. 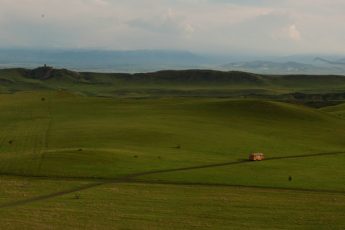