Mona Nicoară’s and Dana Bunescu’s The Distance Between Me and Me (Distanța dintre mine și mine, 2018) 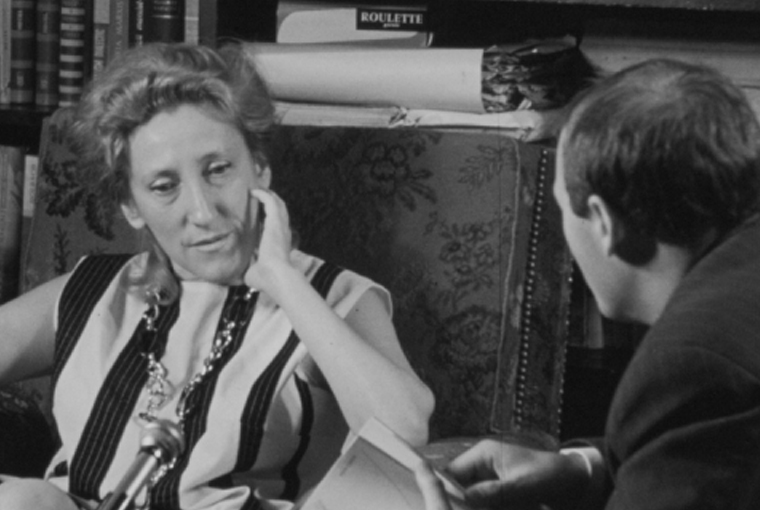 I have had a useless face for a long time,

I have a face to be loved

Mona Nicoară’s and Dana Bunescu’s 2018 documentary centers around the figure of Romanian poetess Nina Cassian. The film takes the form of a long interview with the artist in her sunlit New York living room, which is skillfully interspersed with black-and-white archive footage. Cassian was born in Galati, grew up under the soon-to-be-fascist Romanian monarchy, and was involved in the Romanian Communist party before becoming an enemy of the state, which led to her final exile in the United States in 1985, where she remained until her death in 2014.

When I say that Nicoară’s and Bunescu’s film centers on her figure – that is to say, etymologically speaking, on the tangible form she takes – I mean it in the most literal sense. This focus is already indicated by the film’s opening quote, which is taken from local police archives: “N.C. is a Dantesque figure. Her large nose divides her face in two. This defect is forgotten when she speaks. Voluble, versatile, she is a worldly woman. Poet, composer, painter, she is a lively spirit of incontestable value. NC’s poetry is diverse: socio-political, philosophical, erotic and ironic, rich in ambiguity and resistant to the passage of time.” Indeed, her face dominates most of the film. It is seen in various states, from the face she once had during the Ceaușescu regime, to the one she had later in life. This superposition of images from different times in her life helps create a fully-fledged portrait of which the poet’s face is the visual and filmic center. It only disappears a few times from the screen for archive documents about her to emerge, or even for her voice to be heard.

Cassian seems eager to appear on-screen, a desire easily fulfilled by the continuous close-ups of her face provided by the directors. There is one noticeable moment of frailty where her American husband Maurice Edwards, who is usually silent or remains outside the frame, makes a surreptitious appearance while the 90-year-old chain-smoking poetess has to leave for a break. Cassian is undeniably a Dantesque figure, dominating the screen despite her age, quivering and sickly. She draws you in, enticing you to listen to her story from her living room in New York City.

What came to my mind when watching such a mesmerizing and unique face, only made more enthralling and peculiar by old age, is that there rarely ever was such a Levinasian face. The face, according to French philosopher Emmanuel Levinas, is the place of ethics. It is its frailty that makes it the place of an ethical tension: it is defenseless, exposed, and thus could invite an act of violence. Yet it invites care and love at the same time, conveying the fundamental Deuteronomic “thou shall not kill” which binds us all together in a relationship dictated by ethics and care for the other. Nina Cassian’s face is a face like no other, especially with old age having enhanced features which were already distinctive in her youth, as the spectator can derive from comparing her appearance now with that in the archival footage. It is thus no surprise that this film – like many other artistic productions, such as Eluard’s poem which opens this article – centers around this element of the human body. Just like the face of the poetic persona in Eluard’s poem, which was previously useless, becomes “a face to be loved” or “a face to be happy”, Cassian’s face – in its intimate relationship with the camera and by extension with the spectators – becomes a “useful”, or, as Levinas would put it much more gracefully, a “meaningful” face, one that serves a purpose. It is true that Cassian’s presence overwhelms the film – it is, after all, a film about her – but there is something more that lies in the focus put on such a face, which represents resistance in the face of authoritarianism: the entire film is inhabited by the question of politics and the role the arts and especially poetry can and should play in relation to this sphere of public life.

The film embarks on a journey through the specific yet emblematic story of an uncompromising and complex national poet living under the Ceaușescu regime. If Cassian’s face attracts the spectator’s eye, it also did the Romanian secret services’, as shown by the fascination for her face, her poetry and her character that is conveyed in the secret service quote referencing her “Dantesque figure”. This fascination-repulsion for an artist who represents both the best of Romanian art and an uncompromising and rather straightforward menace to the establishment, turn her into a great example of the power of art to challenge politics, even in times of hardships and authoritarianism. The meticulous collage of a present-day interview, information from the Securitate archives, and chosen moments from the past – Cassian reading a book to children, Cassian debating her poetry in a factory, Cassian’s past self being interviewed while present-day Cassian comments on it – articulates with great subtlety this relationship between arts and politics, and between a complex, layered, and eventful existence on the one hand, and collective history on the other. Throughout the film, Cassian comments on these archival shots that were taken from official archives, official television appearances, as well never-seen-before private recordings, and narrates her own life while reflecting on it. The distance between these two diachronic selves makes for a wonderful narrative device in developing an artistic and socio-artistic commentary.

One scene especially stood out for me, as it underlined the frailty as well as power of art in relation to society and politics. Nina Cassian was first and foremost a poet for the people, or at least she thought she was. In a sequence that showcases both of her faces, one from an archival interview and the other from the contemporary interview, she talks about the role of the poet. It is not clear when the archival footage was recorded, as memories, symbolized by the audiovisual documents from the past that are intercut with the contemporary interview, seem to blur in the film. Still, one can safely assume that it was recorded before the Ceaușescu regime emerged, as it shows Cassian adopting a grandiose, national poet-like attitude which she lost later on, instead finding shelter in working with children as repression grew. Past Cassian proclaims that “my greatest wish is to write for the people. By ‘people’ I don’t mean a particular set of readers in a particular room at a particular time […] I use ‘people’ in its grand historical meaning. Of course, I don’t always have this posted on the desk as I write. But naturally artists want to give their country values that help it endure, shining through history!” Meanwhile, old Cassian states that “I generously dreamt of something outside of myself. It wasn’t selfishness, on the contrary! Sure, I was convinced I was right! But then the awakening came… Someone asked me if I had changed. I said they changed, not me! I kept the small naïve faith!”

This scene encompasses everything that is good about this film. It feels intimate, as the camera frames Cassian’s face in both recordings, but even more so in the contemporary one. It is offering itself to the viewer, especially when she is done speaking and everything falls silent, leaving the spectator with nothing but facial expressions of unease and brooding, both soon to be cleared up by Cassian’s incredibly expressive smile. Through the simple device that is a close-up, and the clashing of a self divided in two by time itself, The Distance Between Me and Me propounds a touching journey through Cassian’s life, whose presence is almost tangible through the screen and who feels familiar by the end of the film, as though it were the spectators themselves who had met her. The film also familiarizes the viewer with the Romanian regime by displaying a variety of archival documents which immerse the spectator in these challenging times. Finally, it sheds light on both the strength and the frailty of art to change society and to have a political impact. Indeed, even though Cassian seems to be disillusioned (though not uncompromising) when watching that interview of a galvanized and confident past self, the fact of the matter is that the very existence of her poems made her an enemy of the state. A Romanian Mandelstam of sorts – luckily, with a less tragic destiny -, the dialogue with her past selves that this documentary offers serves as the example of the position that art holds in illiberal regimes, and the threat it represents to them.

Cassian fought as much as she could by summoning the entirety of her “small naïve faith”, organizing salons and writing poems which could not be published at the time, until 1985, when Georghe Ursu, a poet and friend of hers, was murdered by the secret police. Her unpublished-at-the-time poems mocking Ceaușescu and his wife were also found in Ursu’s personal diary, and played a role in his incarceration and later assassination. It became too great a peril for her to return from the United States, where she was originally staying for a simple lecture. She lived there until her death in 2014.

Still, she stands as a remarkable character whose life should serve as a present-day example in an increasingly authoritarian world, where mutations from democracy to creeping authoritarianism are significant, notably in Europe. Freemuse’s report on the state of artistic freedom 2021​2​ tells us that there were 978 acts of violation of artistic freedom in 2020, with 17 artists having been killed, 82 imprisoned and 133 detained. Most of these documented violations (26%) happened in Europe. Many cases took place Turkey and Russia, yet it is noteworthy that France was the second-worst European country in terms of the number of violations of artistic freedom reported (40), thus coming after Turkey (71) and before Russia (31), the United Kingdom (25), Belarus (21) and Poland (12). For the most part, the harshest transgressions were not recorded in the EU, but many liberal countries keep infringing on democratic values, which mirrors the situation in virtually every country in the world. In this regard, this documentary is an undeniably fruitful encounter between filmmakers whose craft is subtle yet effective and a woman who amplifies their work by generously unraveling her own story and quite literally offering her face to the camera. It carves out the portrait of an artist whose story will resonate and offer hope as we face our political present and the challenging years to come, when European societies, not only in the East but in the West as well, are slowly becoming more divided and intolerant.