A Lesson on How Absurdity is Actually Relatable 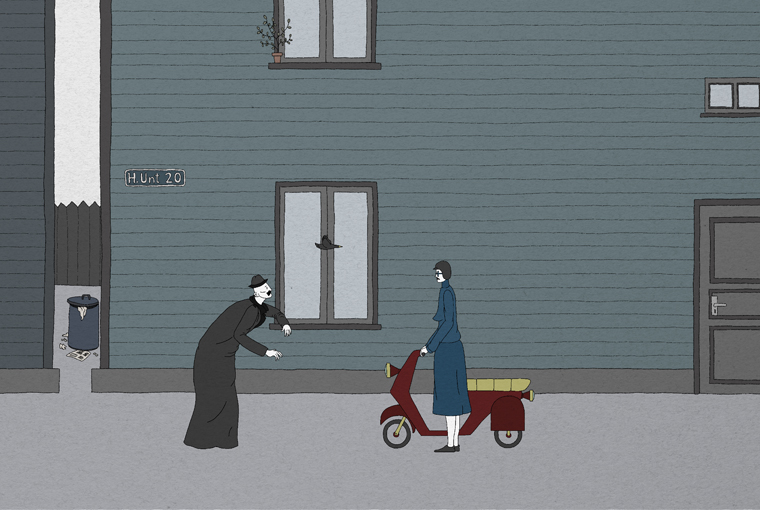 A Demonstration of Brilliance in Four Acts is a 2D animation film Morten Tchinakov and Lucija Mrzljak made in 2018 after graduating from the Estonian Academy of Arts. The film was co-produced by Croatia and Estonia (Eesti Joonisfilm and Adriatic Animation). Since its release, it has won awards such us the Grand Prix at Etiuda & Anima Film Festival as well as the Best Croatian Film Award at Animafest Zagrebit. A Demonstration is a short film, 15 min long, with no dialogue, that depicts rough drawn human caricatures performing absurd deeds. At first glance, the film that opens and ends with Tudor Consort’s rendition of “Amen” from Scarlatti’s Stabat Mater, might almost seem too strange, especially to those who are not familiar with Estonian animation or those who aren’t intrigued by absurdity, in real-life or in art. Nevertheless, even those who are not crazy about long and thin figures with pointed tongues and breasts screeching like birds, will be fascinated by the film’s exceptional narrative structure. Accomplished storytelling that can give you a sensation of completeness is usually a challenge for films, especially for short ones, but A Demonstration of Brilliance in Four Acts pulls off this feat. Thus it is a worthy representation of the Academy that brought together its creators as well as the animators and mentors who helped its production.

The Animation department of the Estonian Academy of Arts is known for paying particular attention to storytelling. The MA curriculum features theoretical courses about philosophy, film theory, ethics and aesthetics, so that participants can improve their critical thinking and learn how to construct solid narratives. The department is also known for its surrealistic tradition. Many acclaimed Estonian animators teach there, like Pritt Pärn, the successful Estonian cartoonist and animation director (and former plant ecologist) whose film Divers in the Rain (2010), co-directed with Olga Pärn, became the most successful Estonian animated film of all time. Pärn’s work is characterized by black humor, playful surrealism and a unique graphic style. Thus, it shouldn’t come as a surprise that those particular elements are everywhere in the film by Tchinakov and Mrzljak. The film pays tribute to the animators (and their respective works) who helped them on their path towards becoming animation filmmakers: a poster of Velodrool, the 2015 hand-drown animation by Sander Joon, and of Krokodil, the 2009 short by Kaspar Jancis, appear in the course of the film as nods of appreciation.

A Demonstration of Brilliance in Four Acts is an ironic commentary on the human tendency to wait for a deus ex machina to worship and follow. The film succeeds because it illustrates the circle of this state: the process of waiting for someone to deify is followed by the process of waiting for someone to humiliate, and then the motif begins all over again. As Lucija Mrzljak told me, the work of Daniil Kharms, the avant-garde Soviet writer known for his absurd writing, was an important source of inspiration. It is worth mentioning that many of Kharms’ stories are autobiographical, focusing on the bizarre circumstances of his birth, a theme also present in Tchinakov and Mrzljak’s film.

The film begins in the same way that it ends: a bunch of identical-looking men are seen sitting on a bench outside of a hospital, impatiently checking their watches. Their yawning suggests that apart from being impatient, they are also idle. Their state of being between idleness and impatience sums up their existence: they are mutilated in terms of acting – they have nothing to do -, they can only find meaning in happening, and so external forces and incidents define their being. These men are waiting for someone or something. And so a man is born, delivered in a suit. He walks out of the hospital and goes to the identical-looking men who cheer his arrival and literally become his “followers”. The man seems to naturally accept his entitlement as their leader. His role consists in performing some ridiculously easy tasks like opening the door, or pointing to the sky. The response of the men to their leader is massive and machine-like – they applaud everything he does.

Over the course of the film, more characters are introduced, the paths of whom are all going to cross in unexpected ways. Two men are forced to share the same body, but they have totally different idiosyncrasies. The one is despotic. He forces the other to read and turn the pages while he points a gun at him. The other has no interest in reading and turns his eyes away in desperation. When they approach a window, a bird flies by. The bossy one screams, he is scared of the bird’s sudden appearance, while the other one smiles in amusement. In the same room, a robot-spider is struggling to hang from its thread while its power is dying out.

In another vignette, a different crowd stands next to a woman, observing and judging her every movement, at first in admiration. But when the woman catches a baby that one of the men carelessly throws down, they notice that three hair are growing on the inner side of her palm. This fact is enough to make them point their fingers and laugh at her. They continue to follow her to continue their abuse and humiliation, their irrational admiration now having been twisted.

Guitar tunes and a whistling rhythm accompany the story of two other characters, an exhibitionist and a woman on a motorcycle. When a woman passes by on her motorcycle, the exhibitionist jumps out of his hide-out to stand in her way. The seconds that follow will determine the fate of all the characters: as the man opens his coat, the woman screams so loud that she breaks the glasses of the leader of the first crowd. This hinders the leader from exhibiting his brilliance with the help of a simple activity involving a fork. Unable to see without his glasses, he stubs the fork in the middle of his hand. The two crowds then mingle, and their leaders meet and emerge. The three hair of the woman and the fork punctures in the man’s palm turn out to be a perfect match. Meanwhile, the oppressed but naive man decides to kill himself. The moment he pulls the trigger, the robot spider dies, and instead of killing himself, the oppressed man kills his oppressor. Lightheartedly he runs to the window, but his freedom is not going to last. He is meant to die at the hands of the object he most admires, the little bird, its beak stuck in his head.

Despite being initially shocked by the exhibitionist, the woman decides to get romantically involved with him. He climbs on the motorcycle and they leave together. While everything finally seems to have been figured out, an external force once more disturbs the plot: a pillar is about to collapse and bring disaster, held up but by the birds who try and balance it. The three-haired woman and her match notice the pillar and prevent the killing of the crowd. Disaster appears to have been averted for good, but then the lovers on the motorbike pass by, killing the leaders. For a moment, the men stand dazed and confused. But quickly, they decide to return to the hospital bench and wait, once again.

“Amen” psalms drop in the end credits, a spicy and humorous way to conclude these absurd incidents. Undoubtedly, the film is a commentary on how crowds become addicted to following the lives of significant others (celebrities/politicians/artists) who stand out for a reason and are thus entitled to their roles as “chosen ones”. At the same time, it mirrors how these very people become self-indulgent and nourish the obsession of the crowd towards them, a modern example of which is celebrities who feed their followers’ desire to get a “real glimpse” into their lives by participating in the every-day madness of social media. Hence the mere fact of people feeling the urge to get led by others, is not only a topos of modernity, but most probably an inherent trait of humanity. People have always tried to be comforted in their existential emptiness by waiting for significant others to deify (on a personal or sociopolitical level) and this procedure is doomed from the start because gods are not supposed to commit mistakes or show any signs of weakness. Thus, the object of worship is inevitably going to be mocked and replaced. What initially looks absurd and odd in the film is in fact totally relatable: this act of absurdity manifests itself in abundant ways. 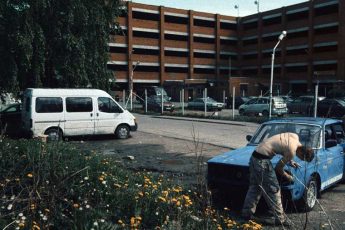