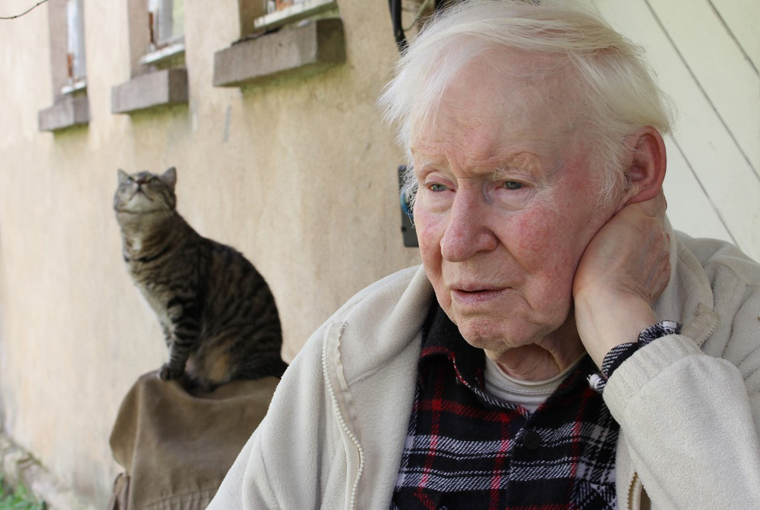 Bridges of Time is an homage to the long overlooked and recently resurging movement of Baltic Poetic Documentary. Originating in the 1960s and continuing for several decades, this wave of filmmaking is often viewed as a rejection of Soviet ideology and its constraints on artistic output in favor of humanistic stories told through expressionistic cinematography in non-narrative forms. Fittingly then, directors Kristīne Briede and Audrius Stonys chose to eschew the conventional retrospective format, instead creating a more meditative collage of their own images interspersed with the classic films of the genre, with sparse but poignant dialog.

The film travels back and forth between the Baltic States, before ending up in Israel, death place of the legendary filmmaker Herz Frank, filming portraits of all the key figures. In addition to Frank, the directors track down Uldis Brauns, Ivars Seleckis, Mark Soosaar, Andres Sööt, Robertas Verba, Henrikas Šablevičius, Aivars Freimanis and Laima Žurgina. The contemporary footage refers back to landscapes of the original works as the filmmakers revisit their locations, creating the “bridges of time” referred to in the title. With a focus on nature, especially land, sea and the traditional practices to them, the film provides a wordless contemplation on what remains timeless and what has disappeared or decayed. Indeed, the changes revealed are almost always in the direction of ageing, with little or no sign of encroaching modernity. Expanding the discourse of time into a broader meta-reflection of the temporal nature of documentary, the directors also muse on how they situate their work within the continuum of history. They question whether it is even possible to make a film with a mind to posterity, or whether documentary can only ever concern itself with the present moment.

Unfortunately, at some point the film diverges from this structure, and exchanges the directors for the protagonists of the works in question. Not only is this change in direction rather abrupt, it is mostly also depressing. A woman who appeared in Robertas Verbas’ The Old Man and the Land (1965) as an endearing schoolgirl feels a painful nostalgia looking back at the film, now that everyone else who appeared in it is dead. A music teacher from the same film is too elderly to play the accordion, once his great joy in life. It’s been five years since he’s even touched the instrument, yet the filmmakers get him to try and he fails, painfully. Most inexplicably, a fisherman introduces the crew to his grey-haired son, once a golden-haired cherub who appeared alongside his father in The Catch (1969) by Aivars Freimanis. Clearly camera-shy, the younger of the two fisherman tries to escape but is forced to stay, the lens unrelentingly trained on him the whole time. It remains unclear what this insistence on making people uncomfortable is supposed to achieve.

The film’s greatest flaw is arguably its alienation of the uninitiated viewer (a category that presumably constitutes the majority). Given the nature of the subject and the overall approach, it is entirely understandable that the filmmakers choose to prioritize form over information. Nevertheless, anyone without prior knowledge of the Baltic Poetic movement, is likely to stay perplexed for the duration and ultimately unenlightened. This is slightly compensated by wider discussion of documentary form, but only to an extent.

A more curious aspect of this lack of contextualization is the concomitant absence of political commentary. Clearly, these films were made in a very particular historical moment, one which is generally referred to as the Soviet Occupation of the Baltic States, and are now being revisited in an entirely different context, in which capitalist considerations have replaced government censorship as the biggest factor curtailing creativity. No explicit mention is made of this transition, only a brief glimpse of an old map of the USSR at the beginning and a dedication in the end credits to “all Baltic filmmakers who created behind the Iron Curtain”. No doubt, the whole film could be interpreted through this very lens, scrutinizing the purposefully unsaid and seeking out allusive references. However, it remains an interesting choice not to address the topic head-on, one that harmonizes very well with the ethos of the movement itself but also leaves something of a Pandora’s Box unopened.

Undoubtedly, however, the film’s greatest strength and the reason its very existence is significant is the incredible quality of the clips used. The footage is moving, varied, highly expressive and exquisitely shot, and best of all they are presented in pristine copies that really do justice to the impressive originals. Whatever its faults in terms of pretentiousness, inconsistency and occasionally grating music, it is impossible to come away from Bridges of Time without feeling compelled to learn more about the films themselves, whatever your prior knowledge of them.