A Caravan of One’s Own 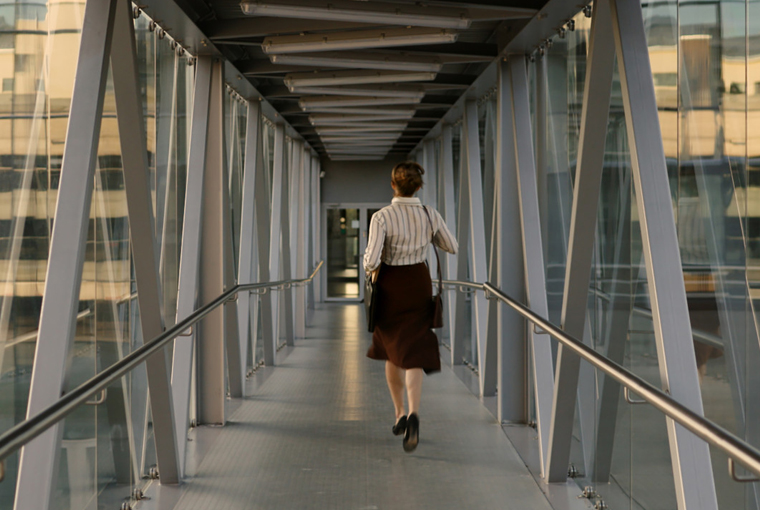 Estonian art-house movie Portugal does an excellent job at conforming to the archetype of the genre. It has plenty of lens flare, shallow focus, cryptic dialogue interspersed with pseudo-meaningful silences, spurious literary references (including the essentials of Kafka and Pushkin) and, of course, a symbolic yet arbitrary ending that offers zero closure whatsoever. For those who are into this kind of thing, the film is professionally crafted, engaging and watchable. Those less inclined towards vacuous emulation of tired formulae may wish to spend 110 minutes of their lives on something else, however.

Most entertainingly, and arguably making for the best scenes in the film, she takes up the habit of making bizarre phone-calls to her dentist partner Martin (Margus Prangel), while his hands are still in a poor unsuspecting patient’s mouth. The two possible causes of this breakdown presented by the film – which if nothing else cannot be accused of over-explanation – are Martin’s presumed but unconfirmed philandering, and a general fear of ageing. Whatever the instigating factor, it appears to fall under the category of general bourgeois malaise.

Indeed, the film is composed of a series of disjointed encounters, which are generally awkward and at times bordering on the surreal. Intriguing characters and ominous situations are dropped into the storyline like breadcrumbs, although not in a way that actually forms any kind of trail, rather more as if scattering them to the wind. For example, after staring intently at a young man working out at the gym, Martin comes home with a bleeding lip. Karina begins to strip as a female friend brushes her hair, apparently on the cusp of a lesbian encounter that is ultimately frustrated. When Karina’s deficiencies at work are uncovered, her boss invites her for cake and takes it upon himself to regale her with his life story, before inviting her to stay at his summer cottage. All of these episodes (and many more besides) are then left wholly unjustified and unmentioned for the remainder of the duration.

Adding to this, or perhaps in keeping with it, the film suddenly changes course around two thirds of the way through. Having talked vaguely of taking a caravan to Portugal, Karina settles instead for the idyllic Estonian coast. Despite the skeptical welcome she receives from the locals – the woman from the convenience store accuses her of “smelling of sex”, while several men duly begin to circle like sharks – she manages to secure their assistance in setting up on a secluded beach. Here she undergoes some kind of Girl Friday transformation, becoming one with nature and apparently self-sufficient with previously suppressed survivalist skills. Here, again, the narrative forks into numerous unconnected paths, none of which ultimately lead anywhere. Karina embarks on a spiritual voyage of discovery that leads her to a montage in the forest and then the sauna. A sinister-looking homeless man watches her while she sleeps. Finally, everything comes to a head with a debauched party and a collective act of arson.

The most frustrating thing about Portugal lies precisely in the fact that, individually, most of these set-pieces and throw away characters have the potential to make for an intriguing story in their own right. In reality, what the film offers is a hodgepodge with no coherence and ultimately no meaning. Similarly, it is pristinely shot with careful composition of gliding movements, recurring reflections and a focus on details, but it is inconsistent and shallow in its aesthetic cleanliness. In terms of the acting, giving the filmmakers the benefit of the doubt and assuming this to be intentional, Mirtel Pohla does an excellent job of appearing to be an almost entirely different person in each scene. The only constant in her character is how unlikable she is, another aspect that can only be construed as deliberate.

Of course, there is no law that says a protagonist must necessarily be charismatic, but if they are going to be grating and not elicit any kind of empathy then this needs to be justified by making some kind of a point, or at the very least by furthering the plot in some way and ideally offering some sort of conclusion. As it is, by the end of the film it is not clear exactly what crisis Karina was facing and whether living in the semi-wilderness brought her any closer to resolving it.