“Boyish Bravura with All Sorts of Hidden Subtext” 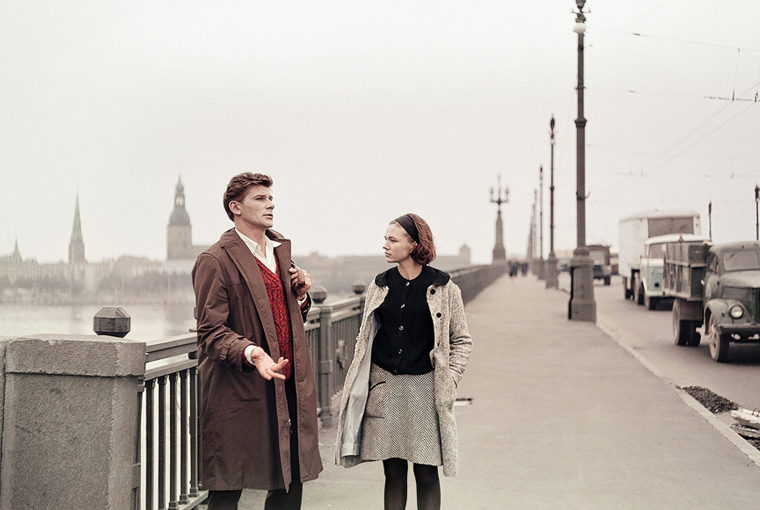 In 1960s Riga, an amateur beat band going by the name “The Optimists” is on the cusp of success. Their star is on the rise after their first big gig and they even have the chance to appear on German TV, but there’s a fly in the works. Prim and proper Anita Sondore (Dina Kuple), a diligent member of the Youth Aesthetic Education Committee, disapproves of their youthful exuberance, deeming their music to be frivolous and loaded with suggestive subtext. Worst of all, she verbalizes this disapproval in a letter to a local newspaper, making a sworn enemy out of the band’s lyricist, telephone technician and poet Cēzars Kalniņš (Uldis Pūcītis). While Sondore’s critique has no officially binding nature, it nevertheless triggers an investigation into the band and their songs, albeit a show-investigation one in which none of the other committee members feel the need to actually listen to them. This in turn divides the group into those prepared to play along, amending or dropping the more problematic tracks, and those, most vehemently represented by Cēzars, who are not prepared to compromise their artistic integrity at any price.

Unsurprisingly, Four White Shirts was immediately banned and never shown publicly until after the collapse of the USSR, but the true miracle remains the fact that such an explicitly critical film was ever made in the first place. Indeed, director Rolands Kalniņš has the dubious but impressive honor of having had three films banned at a time when one banned film was enough to put a permanent end to any career. Although his later Maritime Climate (1974) faced a more unfortunate end, with most of the footage being destroyed, he somehow managed to produce work uninterruptedly throughout his life. In this particular instance, he must have been helped to some extent by the fact of it being an adaptation of a successful play by Gunārs Priede, which presumably constituted some sort of pre-approval. Nevertheless, it remains baffling why the very censorship mechanisms depicted failed to halt production before the film was completed, although at the same time very fortunate.

Aside from the fact of succeeding in producing a film about a taboo topic logistically, the other most impressive aspect is that it manages to do so in an engaging way. Rather than adopting the standard absurdist approach to critiquing the insidious stifling of censorship, Four White Shirts, by contrast, is simple, breezy and light, with a simple plot combined with a playful structure. Almost nothing happens to move the narrative forward or create suspense, but the musical interludes and conflict-driven scenes manage to sustain a certain rhythm and sense of urgency.

Perhaps one of the reasons that the film handles the issue so effectively is that it is as much about a clash of generations and world views as it is about politics. Much like the New Waves coming out of France and Czechoslovakia at the same time, it captures the atmosphere of blossoming expressiveness and flourishing creativity characteristic of a brief moment of idealism – something notably reflected in the choice of the Optimists’ band name. When the middle-aged Sondore looks out of the window she sees a rainy city of misery, but, by contrast, to Cēzars the urban landscape is a playground and constant source of inspiration. The young characters party and drink, with both their actions and songs hinting at a liberal attitude towards sex. Meanwhile, Sondore finds herself literally trapped by their merrymaking. Indeed, there is a heavy implication that her moralizing campaign against the band is motivated precisely by the fact that she draws some unwanted pleasure from it. In a flashback montage to the fateful concert, she seems visibly affected and uncomfortable as she recalls the songs, and there is an obsessive, almost lustful, strain in her compulsive pursuit of Cēzars.

In addition to celebrating the rich pop culture of an area generally either associated with folk traditions or propaganda, the film also celebrates interdisciplinary cross-over between the arts. The most obvious example of this comes from a scene in which Cēzars is inspired to compose a song while gazing at stylized and idealized paintings of couples in love that draw on both traditional Slavic and kitsch hippy aesthetics. More intriguingly, the band shares their rehearsal space with a troupe of mimes that seems to hint at the existence and acceptance of a queer community.

Perhaps most significantly for the dramaturgy of the film, there is also unusually high value placed on the lyrics of the songs rather than the text. This is evidenced first of all by the choice of appointing Cēzars as the central character and unofficial leader of the band instead of its lead singer. Secondly, the lyrics and the interpretation thereof are the main point of contention. A few omissions and alterations would suffice to grant the band their authorization to perform, but Cēzars outright rejects any such possibility. To him, his songs reflect his experience of the city and his identity as a working class artist, and he is unwilling to compromise on his art, even at the cost of not being able to perform. Indeed, the allusive nature of the texts mean they can equally be interpreted as either purposefully subversive or interpreted on a strictly poetic level, and their importance is strengthened by the fact that they were actually written for the film by Māris Čaklais, a celebrated Latvian poet.

At its core, Four White Shirts is a quintessential zeitgeist movie on a par with any of its better known counterparts from further West, and has equal significance both for its political standpoint and its purely artistic merits. Cēzars is the ultimate charismatic troubled soul standing against the system – by today’s standards, he would basically be an egocentric jerk, but within the 1960s frame of reference he is an excellent exemplar of the archetype, and highly watchable. Special mention should also go to the exquisite pastel color palette, which provides the extra touch to the already lush visuals, though of course the music is the real heart of the film and the element that truly gives it its charming character.