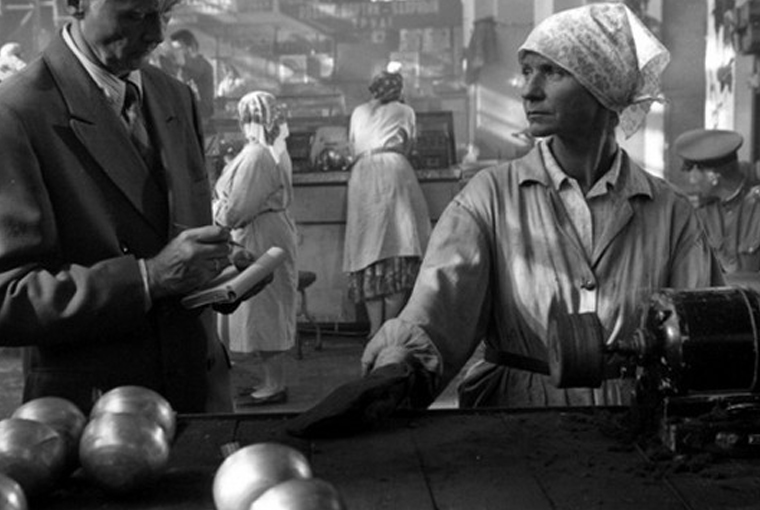 1950s Latvia. A peaceful if murky idyll framed by a grayscale sunset over the Baltic Sea is interrupted by the rumbling of a Soviet patrol vehicle. The next morning panic breaks out as three Russian soldiers discover a woman’s shoe on the beach, and leap to the only apparently logical conclusion – “the border has been violated.” So begins The Shoe, a subverted Cinderella tale that exchanges princes for ineffectual military underlings. Here, the prize for having the right sized foot is the gulag rather than the ball.

The narrative, insofar as there is one, follows the three hapless soldiers around the small town of Liepaja as they search for women to subject to the paradigmatic trial by shoe. (Liepaja is director Laila Pakalniņa’s actual home town, which may in part account for the impressive physical use of the town layout). However, it is clear from very early on that the driving force behind the film is not the fulfillment of this quest, but rather the futility and ineptitude of their attempt. As a satire on Soviet inefficiency and misplaced paranoia, the film is unrelenting, from the depiction of the Russians as idiotic caricatures to their nonsensical approach to carrying out an illogical task, underpinned by the bizarre imagery of the nicknames assigned to them for radio communications (“Pine tree”, “Bell-flower”, etc.).

In contrast to the frenetic bustling of the soldiers, the daily life of the locals continues to meander along largely unaffected, creating a juxtaposition between the naturalistic setting and the farcical nature of the events taking place and also establishing a dominant sense of “us and them” (or arguably “them and them”, since the audience is never fully aligned with the town dwellers). This alienating effect is heightened by the audio, which is strictly diegetic with no score, but emphasizes commonplace sounds, especially machines and animals, which acquire a distorted, uncanny quality. Similarly, the representation of the characters is fragmented, with intimate but anonymous glimpses. We observe the locals at home, work and leisure with an almost ethnographic eye that ultimately serves only to create further distance rather than personal knowledge. The most significant amount of exposition is devoted to the soldiers, but as they are generally shot either at a distance or extreme close-up they are largely indistinguishable from one another, as if forming three heads of a bickering Soviet Cerberus.

The most striking and accomplished element of these stylized aesthetics of the everyday is the mise-en-scène. Long, lingering shots unfurl with carefully composed frames that play on foreground-background contrasts. The alternatingly static and drifting camera seems passive, as if observing indiscriminately, then suddenly reacts to a person or an event, acquiring agency. Although ostensibly tailing the soldiers at work, the camera often precedes their marching or hangs back after they have passed, revealing what is hidden to them – evasive women, tantalizing untested feet scurrying in and out of shot. This places the camera in an interesting position that falls short of omniscience and sometimes coincides with the point of view of the soldiers, yet maintaining an air of complicity with the locals, which in turn it extends to the audience.

With its combination of naturalism and wry absurdism, The Shoe would not look out of place among the Czechoslovak films of the late 1960s, which raises the question of why the director felt compelled to paint a damning portrait of Stalin-era inadequacy in 1998, almost a decade after Latvia regained its independence. Of course, historical revisionism and reassessment was widespread through the newly independent states of the former Eastern Bloc, and seven years is not an excessively long time for this process, especially given the collapse of the formerly centralized film industry. It is not surprising then that some of the most successful Latvian films of the Post-Communist years have embraced the trope of the nation as a group of plucky underdogs who triumph against imperialistic superpowers, Defenders of Riga (Rīgas sargi) from 2007 being the most evident example of this.

In The Shoe, the disassociation of the Soviets and Latvians is very clear. Early on in the film the soldiers are seen as shadows hovering over the streets, and they go on to infiltrate every institution, from the school, to the slaughterhouse and the local factory. In one particularly memorable scene, the patrol searches an apartment building floor by floor, and as it opens each door all activities and sounds come to a sudden halt, and the residents stand awkwardly frozen. A linguistic clash also permeates the whole film, adding further layers of estrangement. However, while the occupier-occupied relationship is made patently apparent, the characters show no trace of heroism, at least not in the conventional sense. Their form of resistance rather lies in their dogged continuation of normal life, as exemplified by the true owner of the shoe, who is revealed in the final scene to be nothing more than a young, free-spirited pleasure seeker.

The subtle intersection of representational modes is thus neatly embodied by the titular shoe – an everyday, banal object that ultimately undermines the political meaning ascribed to it within a fantastical trope through its very banality. Whatever the message Pakalniņa intended to impart to the Post-Soviet world with this tale, it remains an impressive example of a story driven by aesthetics and atmosphere.