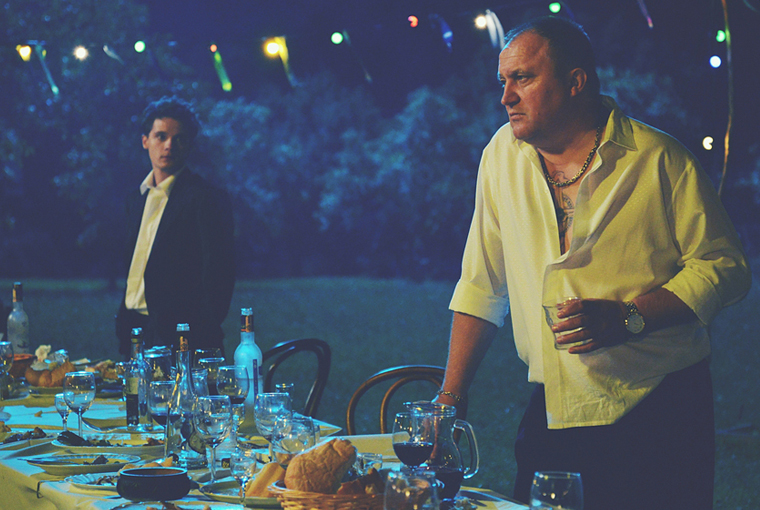 The Slovak-Ukrainian co-production The Line picks up two themes whose relevance has only increased since its release last year. There is, on the one hand, the border between the European Union and its Eastern neighbors which is depicted as both a geographic and legal boundary – an ever-present political question -, and its subversion by a contraband mafia and local officials which calls to mind the controversy surrounding last month’s murder of investigative journalist Jan Kuciak. Actor-turned-director Peter Bebjak approaches these themes in a action-driven flick centering around mellow mafioso Adam Krajňák (Tomáš Maštalír) and his family. We follow Krajňák as he monitors the smuggling of cigarettes across the border, but also see him having to confront his teenage daughter’s relationship. Bebjak has us believe that a man who is ready to cut off his footmen’s fingers also sits down with his family for breakfast, where he is ready to discuss his pedagogical principles (though he might take out his rifle as a last resort).

As one may expect, these two narrative strands ultimately cross, though a good part of the film is driven by Krajňák’s illegal dealings. As we are quick to learn, Krajňák is not as big as his posture and bearing may suggest. At the big guys’ table, there sit cartoonish villain Krull (Stanislav Boklan), a dangerous type who provides Krajňák with the goods, and the corrupt head of police (Andy Hryc), both of whom need to be pleased if a transport of cigarettes is to cross the border. Among Krajňák’s friends, Jona (Eugen Libezňuk) stands out, a close associate whose son Luka (Makar Tikhomirov) is in prison and who is thus more willing to compromise his “principles” than Krajňák is. This gives the film a moral spin beyond the more trite hectoring, which is well-executed but unfolds in a familiar fashion. Ultimately, Jona will pressure Krajňák into accepting deals on which he cannot deliver, leading to a stand-off between the two which can only be bridged temporarily. What happens when your transports get intercepted on the border and you accumulate a debt with a guy like Krull? Though I will spare you the details, this film, too, teaches us that the really big guys are untouchable, and that the world of mafia knows no heroes. So far, so good.

Understandably, Krajňák’s double life allows Bebjak to work with different genres and styles, covering the fact that none of them are treated in a particularly original way. Thus, the most curious feat of The Line may be its ability to speak to so many different styles and audiences. Besides being a crime thriller, it is also – in no particular order – a comedy, a family drama, a political thriller, and the portrait of a local region. And apart from middle-aged women, who are portrayed as naïve creatures who are oblivious to the troubles of the adult world (a worryingly common trope of gangster movies), virtually all demographic categories are catered to, if with various degrees of explicitness. Most obviously, the film constructs a certain (and presumably admirable) picture of men as assertive, strong, and protective heads of family. But even daughter (Kristína Kanátová) and grandmother (Emília Vášáryová), the former youthfully rebellious, the latter manipulative and knowing, are unlike their generational intermediary (Zuzana Fialová) in managing to resist Krajňák’s patriarchal ambitions.

Though such volatility is licensed by the film’s subject matter, which is – in a non-trivial way – indeed related to society at large, it mainly seems to be motivated by economic considerations. It is thus no coincidence that The Line ended up at the top of the Slovak box office last year, but simply the result of a successful creative strategy. There are clear indications throughout the film that the makers were interested in mediating the claims of each of the demographic groups depicted while preserving their respective dignity and coolness. At the end of the film, young women can identify with their generation’s heroine, who stood up to her overbearing father, while men and boys who answer to the sort of coolness cultivated by this film can dwell in the existential melancholy of honor and righteousness. Is there, according to our public consciousness, anything more dramatic than having to live without your family because you are a man of honor? What about hiding in the side aisle of the church where your daughter’s child is being baptized, which your daughter suspects is the case but is unable (or unwilling) to do anything about? (And what better way to cherish such moments while also being fed comedy, sex and violence?)

In spite of the cynicism this claim involves, to me the film’s box office success suggests that the film did not misrepresent Slovakia’s public consciousness. (To conclude that it depicted it accurately would be a non-sequitur because that would imply a sort of unity in the public consciousness which is obviously unrealistic. You may accord with the public consciousness, but you cannot depict it 1:1 because it is not a thing.) This suggestion is cynical not just because of the film’s above-mentioned propagation of misogyny and machismo, but also due to the film’s relativization of domestic abuse, its archaic understanding of honor, its willingness to indulge in national clichés (nevermind its laudable co-production efforts), its inability to give voice to the people who we see are being degraded, pressured and rushed over the border (if you do not count a few negligible attempts), and its general readiness to laugh about that which is not funny in a way which makes that laughter dismissive if not degrading. This is not to say that The Line is, in commercial terms at least, not a well-made movie. Nor is it to challenge the filmmakers’ diagnostic skills. My main issue is not with the accuracy of the diagnosis, but with what the diagnosis implies. There might be a case against the filmmakers catering to such prejudices of their viewers, but that is a case I find both patronizing and delusional. If the makers of The Line are indeed right about the state of Slovakia’s self-understanding, then their film is just a drop in an ocean of resentment.