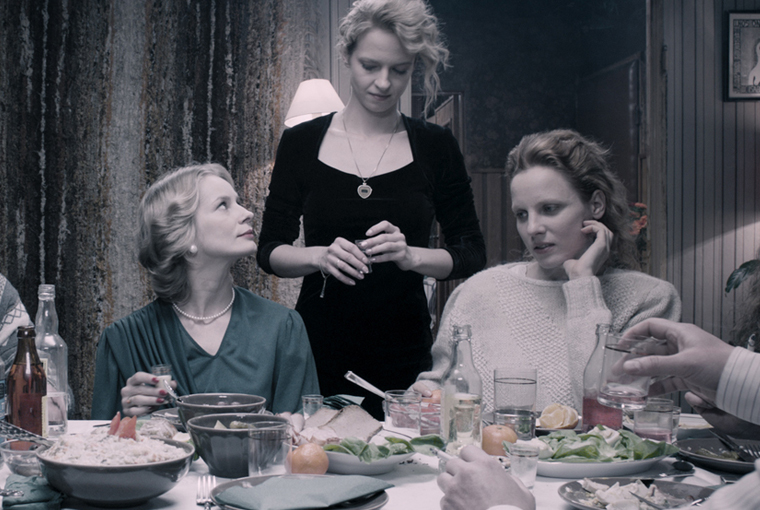 Polish cinema is not known for its exuberance. As something of a private joke, criticisms of the supposedly crowd-pleasing conclusion to Jakubowska’s holocaust movie The Last Stage once inspired me to coin the expression “a Polish happy ending” (spoiler: the main character slashes her wrists just as the Red Army arrives to liberate Auschwitz). Overcoming my preconceptions, however, I approached Wasilewski’s much lauded United States of Love with genuine excitement. Here is a film with “love” in the title and a multi-narrative structure centered around women, providing no less than four opportunities to prove me wrong.

The first blow to my enthusiasm comes with the opening shot, which reveals a clichéd and irritating aesthetic that has been massively over color graded to give it an eye-straining, suicide-inducing blue hue (blame for this tendency presumably lies at the feet of Kieslowski, who was at least original when he did it). What’s more, the camera vacillates in a distracting, nausea-inducing manner, quivering nervously rather than staying still. I retain my positivity, however. After all, the effect is probably intentional.

Bucking a trend that sees a lot of films reject overt plot exposition, the opening scene leaves viewers with little doubt as to where we are and who is who. In between discussions of where to buy Fanta and jeans (yes, we’re in the 1990s) and unsubtle introductions (“You remember my sister…”), we meet three of our four protagonists. Agata (Julia Kijowska) runs a VHS rental service and is fed up with her husband. Marzena (Marta Nieradkiewicz) is a former beauty queen and current fitness instructor whose husband lives in West Germany, and Iza (Magdalena Cielecka) is the headmistress of the local school.

The women’s stories are told sequentially, and each unfolds during the same period of time, meaning the narrative resets as we shift between characters. First comes Agata, who shows promise. As either cause or effect of her stagnating marriage, Agata develops a crush on a handsome young priest. Thematically, the concept raises hope, there being an endless amount of things to say on the topic of Polish society and religion. As her obsession advances, she becomes completely non-functional, and largely spends her time staring into the distance. When the priest in question comes to bless her apartment, she frantically drowns herself in deodorant, then proceeds to break down and sob hysterically in the toilet. And that’s pretty much it. At best we’re left with a fairly close to the bone if somewhat facile portrayal of a loveless relationship, but very little development in terms of the plot, theme or character.

Story number two is that of Iza, the headmistress, an immaculately presented woman in her 40s who is clearly capable, intelligent and independent, at least until things go wrong in her love life. Having been the other woman to a doctor for six years, when her lover’s wife dies he suddenly suffers from an attack of conscience and breaks things off. Iza enters some kind of panic mode and begins to act irrationally, confronting him in his office, at his home and eventually targeting his daughter, who is a pupil at her school. This story does offer some kind of a conclusion, albeit a tragic and violent one.

Mercifully, the third and fourth stories are intertwined. Marzena, the nubile young fitness fanatic, is lonely without her husband and feels as though she is owed more by life, so contemplates an affair with a photographer. Meanwhile, Renata (Dorota Kolak), her neighbor and an erstwhile employee at Iza’s school, is infatuated with her and unable to get her attention. In a moment of desperation, she stages an accident on the staircase, grotesquely covering herself in milk, to lure Marzena into taking her back to her apartment (which is full of birds, in inevitable crazy old lady style) and helping her get undressed. An awkward relationship that falls short of friendship emerges between the two, with Renata becoming an increasingly invasive presence in Marzena’s life, which in turn becomes increasingly pathetic. This story arc and the film fittingly conclude with what is, to give it its dues, one of cinema’s most painfully accurate depictions of a hangover, which is about the best thing that can be said for it.

Whatever point Wasilewski is trying to make with this film cannot possibly be justified. Regardless of whether his intention was to critically deconstruct communism, capitalism or the transition between the two, what he has actually created is an indulgent, meritless condemnation of women as hysterical, self-interested and cruel. Not only are the female protagonists extreme, unlikable caricatures, they are entirely devoid of any contextualization that may redeem their actions or offer any hint of insight into their psychology. There is no balancing portrayal to counter the suggestion that all women are emotional time bombs constantly on the brink of wreaking havoc. The intended allegory does not account for the stereotyping of women, especially given the absence of any male equivalents. The depiction of female sexuality is particularly disconcerting, as it seems to imply that women only have sex as a form of manipulation or as an outlet for some kind of psychological disturbance.

Now, thanks to the film, it’s tempting to add the expression “Polish sex scene” to my lexicon, meaning one in which the two lovers despise each other and everything ends in uncontrollable tears. That would be unfair to the rest of Polish cinema, however, and would be sinking to Wasilewski’s level of unfounded and unsavory generalizations. Poland deserves a more nuanced portrayal, one that isn’t predicated on reinforcing lazy, negative tropes, and so does womankind.