This year’s retrospective at the Vilnius International Film Festival “Kino Pavasaris” presented the early works of director, screenwriter and actor Raimondas Vabalas (1937–2001). The first decade of his oeuvre was marked by films of exceptional impact and style: Footsteps in the Night (1962), March, March! Tra-ta-ta! (1964), Staircase to Heaven (1966), June, the Beginning of Summer, (1969), and Stone Upon Stone (1971). Working for the Lithuanian Film Studios during the Soviet period, Raimondas Vabalas became one of the most compelling and unique Lithuanian directors.

Raimondas Vabalas was born in Paris in 1937. At the age of 4, his family moved to Panevėžys, Lithuania. As a young adult he often went to the movies and later joined the Drama Theater of Juozas Miltinis, who was a student of Jacques Copeau. In 1956 he left Lithuania to study at the Gerasimov Institute of Cinematography in Moscow. Juozas Miltinis and Lev Kuleshov had a significant influence on him. Vabalas adopted a certain rigor from them that would become characteristic of his art and was expressed in his strict working methods with actors, meticulously prepared storyboards, and precise compositions.

Vabalas’ professional career started with big projects. When Raimondas Vabalas was only twenty-two years old and still in film school, he was confronted with a first challenge: he was asked to finish the film Canonade (1961), a project initially started by filmmaker Arūnas Žebriūnas who was seven years his senior. Shortly after completing Canonade, he started working on a feature-length graduation film, Footsteps in the Night. It was not common to finish film school with a feature length film, but Vabalas got the offer to direct a screenplay about a Jewish prisoners’ escape from Ninth Fort, Kaunas during World War II. Even though this screenplay was imposed on Vabalas with the requisite to turn the Jews into “Young Communist League fighters from Kaunas”, he managed to convert the project into his first auteur film. He devised the story about the Nazi occupation in Kaunas in his own style, thus avoiding naked propaganda. The aesthetics of the film thus borrow from early German expressionism (distinctive shadows, contrasts, and distorted space), as well as from French poetic realism. Some scenes recall the precise compositions and plastics of Jean Renoir. This unique combination creates an atmosphere that is dramatic and realistic at once. While Jonas Gricius’ cinematography mainly focuses on a psychological portrayal of the characters, his expressionistic “dance around the fire place” scene became a classic example of metaphoric language in Lithuanian cinema. Despite these aesthetic innovations, in retrospect Raimondas Vabalas admitted that he still feels regret for not being able to speak directly about the Jewish massacres surrounding the depicted events.

Perhaps the most remarkable example of genre film in the history of Lithuanian cinema is Vabalas’ March, March! Tra-ta-ta!. Combining elements of satire and the grotesque, it straightforwardly illustrated the director’s political ideas: his criticism of totalitarianism. The idea was ambitious not only in its choice of genre, but also from a technological point of view – it was the first Lithuanian film to be shot in color, by Donatas Pečiūra. Remembering the audience’s reaction to the film, the director expressed his frustration with Lithuanians’ sense of humor. They allegedly failed to comprehend the film’s satirical tenor.

While Vabalas’ first films convey a certain formal rigor, their controversial and often provocative subjects are characteristically open-minded. His later films Staircase to Heaven (1966), June, the Beginning of Summer (1969) or Stone Upon Stone (1971) are particularly revealing of Vabalas’ free-spiritedness. Interviews with Raimondas Vabalas and his contributions to the “Kinas” magazine paint the picture of an artist who is inseparable from his art. In one of the interviews, he is outraged by the labels Lithuanian film critics came up with to distinguish local directors. They called Vytautas Žalakevičius’ films intellectual, Arūnas Žebriūnas’ films poetic, and Raimondas Vabalas’ films socially charged psychological dramas. When an interviewer asked Vabalas what kind of genre is characteristic for his films, he replied “if you really need to do find a label, stick to Raimondas Vabalas.” The joke echoes Francois Truffaut’s definition of auteur politics. However, that would be yet another way to put a label on his cinema.

Throughout his career, Raimondas Vabalas had to struggle with Soviet censorship. Even though his films were closely scrutinized by Moscow censors, he did not step back from his political convictions and adapted Mykolas Sluckis’ novel Staircase to Heaven. It was the first Lithuanian novel that illustrated the post-war years as a distressing period of social transformation. The film sensitively portrays the urban and rural divide, highlighting the helplessness of individuals in relying on their own principles and in resisting uniformization. The film was of personal importance to the director as it openly addressed Lithuanian partisanship. Raimondas Vabalas’ father was a partisan and died when Vabalas was still a young boy.

Vabalas rewrote the script for his next project June, the Beginning of Summer many times. The film was finally shot over a long period of time with several changes impeding the production process. The production marked the end of (the Khrushchev) thaw with the cultural industry benefiting from more liberties. Vabalas portrayed the everyday life of the 1960s in this film, stylistically reverting to realism. He exposed the monotonous rhythm of life, criticizing the insularity and loneliness of ordinary Lithuanians.

Stone Upon Stone, Raimondas Vabalas’ last film in the first decade of his creative work, continues the director’s penchant for ordinary citizens by depicting the period of serfdom, another Lithuanian first. Again exploring mechanisms of power, Vabalas’ film depicts the confrontation between the common people and the powerful nobility. The director would return to this topic throughout his career. But later films such as By the Border (1972), Smoke and the Toddler (1975), The Exchange (1977) or A Flight Across the Atlantic (1983) were not as artistically creative. They lacked the precision and rigor characteristic of Vabalas’ earlier films. Their narrative drive is reduced to shallow dialogues that border on didacticism. Yet all of them as well as his last film Autumn Comes Through the Forest (1990) truthfully bear witness to the tense period that preceded the fall of communism, translating the status quo into cinematic language.

Raimondas Vabalas devoted his life to observing people’s everyday life and struggled with Soviet ideology. The director’s oeuvre is characterized by his sensitivity for history and the political situation in the country, as well as his quest for new forms of cinematic expression. He didn’t try to impress; his cinematic language was simple, precise and sharp. Throughout his life, Vabalas wrote and thought about art, people, global history and politics. He was re-thinking processes which drive human beings into various ideologies and conflicts, and that’s why his films gained universality and weight without losing their touch with local elements and moods. 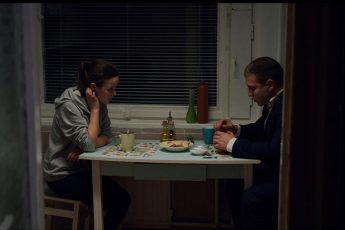