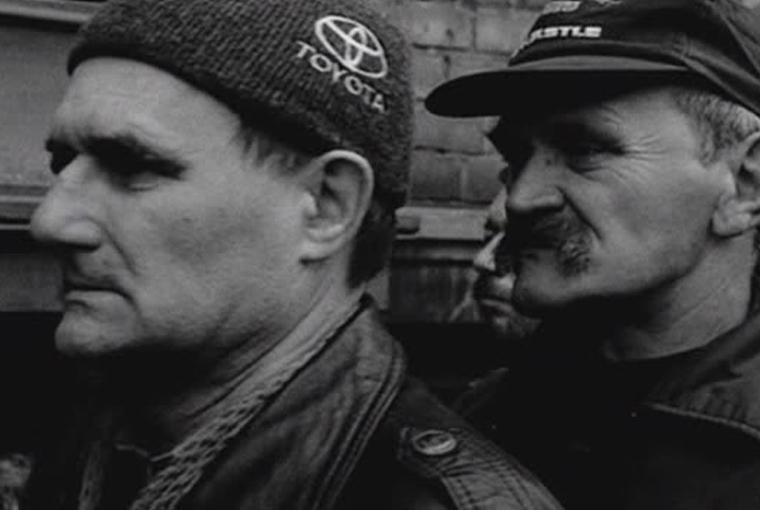 Prologue (2004) is a short film by Hungarian director Béla Tarr. It consists of a single tracking shot showing people that look like blue collar workers, standing in front of a run down brick wall. After following a long line of faces for a few minutes, the film begs one question. What are all these people waiting for? The shot ends in front of an open window on the brick wall where a woman gives a small bag of food and a plastic cup filled with some beverage to each of them. The clock on the wall behind the woman strikes 12. It is lunch time. The woman makes a note for every person that she serves, apparently counting them. The film is accompanied by the synthesized music of the composer Mihály Víg with whom Béla Tarr has collaborated many times in the past.

Prologue is part of a 25-film project made by directors of country-members of the European Union which is called “Visions of Europe”. Famous directors like Peter Greenaway, Aki Karusmäki and others participated in the project making short films about the way they see Europe. Prologue presents Béla Tarr’s view of Europe on behalf of Hungary.

For Béla Tarr, a film about the misery of the workers does not come as a surprise. Since his early work, he has been known for his political films that portrayed the struggles and the realities of the working class. Despite this predominant political appeal, the context of his films is not always that clear. Although we could assume that they refer to political and social realities in Hungary, one can not be sure about it. Tarr has used actors of different nationalities in his films and his stories usually had a universal character. However, this time he was supposed to talk about Europe. One could claim that he did not hesitate to present a typical image of poor Hungary as representative of Europe. The background seems to relate to his country. But is it really Hungary in the end? Maybe Béla Tarr once again avoids precise setting to his film, leaving it open to different interpretations about the universality of the context it presents.

Maybe Béla Tarr avoids precise time and setting, because he has a feel for how history repeats itself under certain social conditions. In unrestrained capitalism, hunger lines are nothing new. Consider, for example, how the people in the Dickensian painting below resemble those in Béla Tarr’s film. 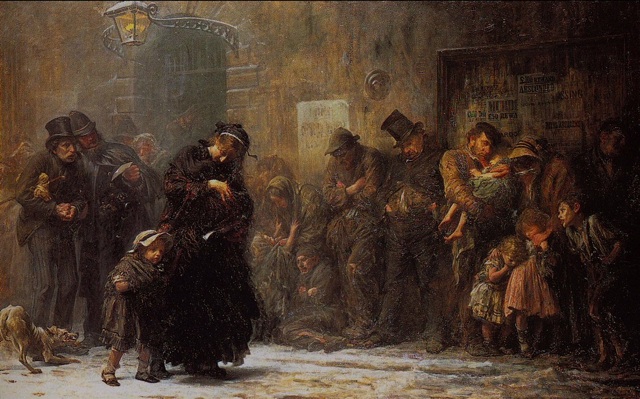 The repetitive imposing music and the continuous single shot are choices that seem to serve the message that the director wishes to pass on to the viewers. It is not one, it is many people, endless people waiting. And it neither starts nor finishes somewhere, it is infinite. Poverty meets no limits at its expansion in capitalism. It has a face, but is impersonal at the same time. Recall how the camera follows the emotionless faces of the people who are hungry waiting in line for a piece of food. However, when the camera stops in front of the open window, we only see the back of the people’s heads while they are being served. Their individuality is no longer discernible. They are units. They are served and counted as units.

Indeed, the only vision of Europe existing today is a similar vision of expanding poverty and injustice. More and more people around Europe have to face the everyday reality depicted in Prologue. Those hunger lines are everyday home to more and more social groups. The number of homeless people has increased due to the economic crisis in the last years. For countries in southern Europe like Greece, Spain and Portugal, where the economical crisis has caused severe social changes the last years, the waiting lines in front of public “kitchens” have grown vastly. For example, only in Athens the number of people attending hunger lines has increased to about 50% the last couple of years, apart from the people who seek help to unofficial solidarity “kitchens” organized by different networks of people and associations around the city. It no longer matters if you live in Eastern Europe. This model of development meets not borders between the north and the south, the east and the west. It only meets the borders of social class.

Béla Tarr’s film foresaw today’s Europe. Many reports say that national Rough Sleeper numbers in Spain rose by 23% in the year to autumn 2011, a more dramatic growth dynamic than anything seen since the 1990s (Guardian , December 2012). There are unprecedented numbers of homeless people, and they are no longer limited to alcoholics, drug addicts or the mentally ill. The new homeless come from different walks of life. Many studies demonstrate that the middle class, the young and the moderately poor are now more likely to end up on the street(Le monde diplomatique, December 2011). The hunger lines that grow in southern Europe seem to represent a more general image of Europe. After all, homelessness and poverty have also increased in eastern European countries of the ex-soviet block despite their entrance to promising Europe.

As pessimistic as it may seem, the representation of Tarr’s Europe is one that cannot be challenged. Béla Tarr’s vision of Europe in 2004 could be considered as cliché by some. But apparently, his vision back then was not only accurate but it also served as a warning for what was about to follow. The end of the economic crisis is not over. The hunger lines are growing, while Europe watches the powerful few profiting from it.