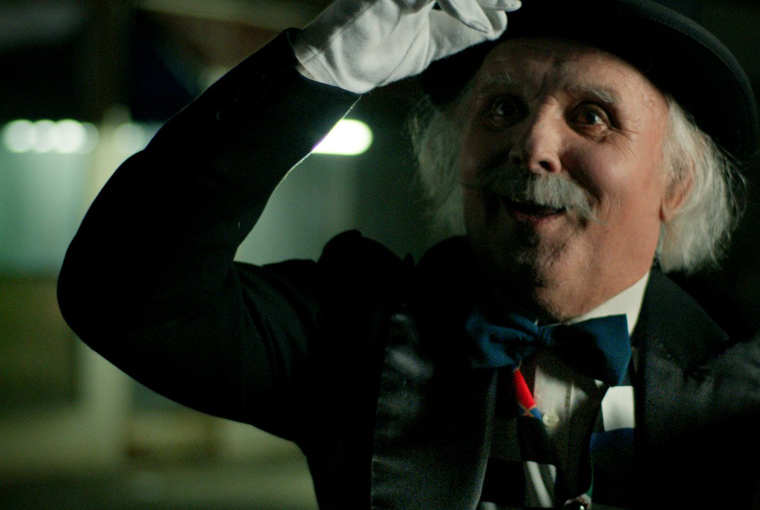 The film begins enticingly enough, with a bearded man answering a two a.m. call with a few laconic sentences: “A murder, you say? …Why me? …All right, 100,000 francs.” And then he announces that he will take the train, not the plane. This preference is never explained but leads to a hypnotic sequence of the camera snaking over crisscrossing train tracks as Simon the Magician (Andorai Péter) exchanges Budapest for Paris. The change is not a particularly dramatic one as the stations in both cities look almost exactly the same.

Who has been murdered? Who is the murderer? Why have the French police called upon the services of an antisocial Hungarian mystic? Actually, the viewer rapidly discovers, all of these riddles are red herrings, not so much resolved as thrown disdainfully aside. The real mystery is Simon himself. Depending on your point of view, this is either an anticlimax or an intriguing affront to dramatic expectations.

What can be said to writer-director Enyedi Ildikó’s credit is that this affront is very deliberate. Storytelling usually demands that a hero be confronted with events beyond his control, even interior, emotional events. Even the New Testament’s Jesus, God in the flesh, is faced with moments of unbearable temptation and torment. (The reference is not frivolous, as will become clear.) Simon has a rather unique problem among protagonists: the supreme mysteries of life, death, good and evil seem to irritate him, while the seemingly mundane problem of communicating with the French leaves him utterly perplexed.

Not that this tangle provides much dramatic tension. Simon practically directs the film. He has a habit of ignoring the official business at hand to pick out the truly important person in the scene. Instead of greeting his translator on the quay, he fixates on a waifish young woman (Julie Delarme) enduring a rude rejection by a young man. Simon’s unreadable expression—empathy? Desire?—doesn’t waver, but the young man suddenly halts in confusion, bends down and kisses the girl’s hand. Afterwards, the fighting couple no longer seem to know each other.

Later the mage’s eyes will focus on a young policeman (Hubert Koundé, otherwise seen in Kassovitz’s La Haine) who will be nearly sole Frenchman with whom he deigns to interact. The girl disappears temporarily from the film as the murder portion of the plot is dispensed with. Simon’s “magical” techniques make for a few beautiful scenes: after driving the policeman and the flighty Hungarian translator (Mari Nagy) from the scene of the crime, Simon meditates alone. His attention is drawn to an exotic houseplant, which Enyedi then shows the smooth shiny leaves in abstract close-up. Afterwards, the magician directs the inspectors to assemble all of the victim’s left-handed acquaintances and measure the plant’s chemical signals. Simon explains the plant’s importance to the astonished young policeman. His reasoning has an elegant absurdity that, had it permeated every moment of this film, would have made it great: the well-tended plant loved its owner, it will surely react to the presence of the murderer.

Simon’s most interesting relationship, however, is not with the policeman, who begs to be his disciple, but with an invidious Magyar rival magician, Pèter (Halász Pèter). Strangely enough, despite Pèter’s boasting and crass publicity-seeking—not to mention his cadaverous looks—this apparent antagonist is much more human than Simon. His brash attempts to impress the more revered magician come off as rather pitiful. “Do you want to know my secret for levitating?” he asks eagerly. He will soon achieve the ultimate feat, he announces: he will spend three days buried underground and then be resurrected. “The churches are snarling, of course,” he remarks casually, but that is all part of the fun. Simon, of course, is utterly unfazed. But he seems rather amused with Pèter’s computer program which maps out the movements of the stars over an image of a homunculus hibernating under the ground.

Later, he accepts a challenge from Pèter to be buried alongside him, and this “duel” more or less constitutes the climax of the film. Alas, the ending is a disappointment, for Enyedi is more interested in the return of the waifish girl. A romance ensues between the baby-faced young woman and her magical suitor. It’s quite funny at times, since Jeanne chatters too much to realize that Simon doesn’t understand a word of her French. But it also feels strangely inconsequential. Perhaps this is the point. Certainly, life, death and resurrection matter less to Simon than a coffee date with Jeanne. But I can’t help but find it cruel of Enyedi to bait-and-switch the audience in this way.

One great merit of the film does stand out – its exploration of Paris: the orderly 19th-century avenues, the graffitied back streets, the stupendously expensive apartments and the grimy late-night bars, the barren landscape of La Défense where the two magicians are buried. Above all, this Paris is a reflective, glassy city. Enyedi sometimes seems to be trying to film Simon through as many panes of glass as possible. The effect is to create a reflection of Paris that is different from the “real” one and gives the film a slippery double aspect. In this visual respect, at least, Enyedi’s ambivalence is fascinating.