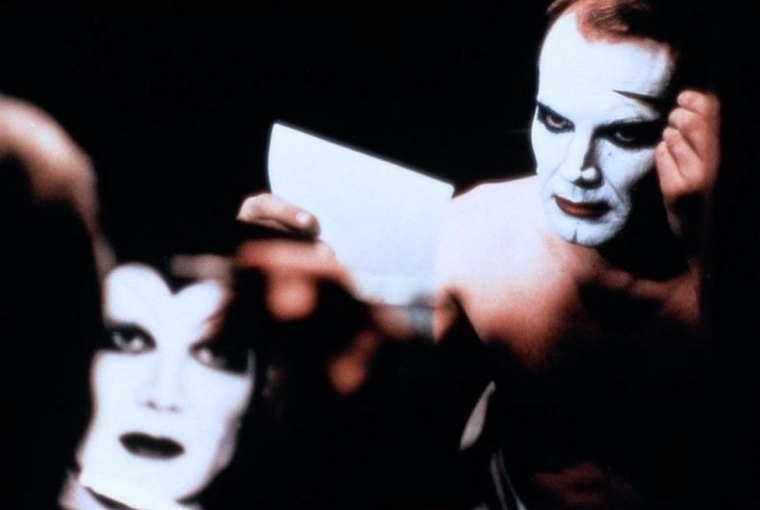 In 1981 István Szabó shot Mephisto. The film is an adaptation of a novel by Klaus Mann which gives a fictionalized account of the rise to stardom of the actor Gustav Gründgens, perhaps the most famous Staatsschauspieler of Nazi Germany. The novel is quite unambiguous about Gründgens – called Hendrik Höfgen in book and movie – who gets depicted as a ruthless opportunist and blind follower of the dystopian authority. The novel’s limited sympathy for its protagonist is further amplified because Mann juxtaposes Höfgen’s biography with his own. There is the Bruckner family which resembles the Manns and represents everything Höfgen is not: cosmopolitanism, political responsibility, and artistic superiority. Most dramatically, the Bruckners decide to emigrate and sacrifice their careers in the German art scene for their political beliefs. The novel does not distinguish between art and politics. When Klaus Mann lets Höfgen tell his friends, as they become increasingly aware of his willingness to collaborate with the Nazis, that he is “just an ordinary actor”, readers can easily get the impression that “ordinary”, from the point of view of the Bruckners, not only implies normopathy – something on the line of what Hannah Arendt called the “banal” – but also aesthetic mediocrity. Indeed, in the novel, Höfgen admits his failure of playing Hamlet. Good art, the novel seems to suggest, is only good when it is done by good people.

István Szabó’s Mephisto casts this premise aside and depicts his protagonist as a true genius of his profession. This is to a large extent due to Klaus Maria Brandauer’s incredible performance which manages to blend corrupting social behavior with honest artistic ambitions in a way that does not seem contradictory. When Szabó’s Höfgen repeatedly says that he “is just an ordinary actor”, it doesn’t seem to cross anyone’s mind that his careerist concessions jeopardize his talent. On the contrary, Höfgen flourishes in the role of Mephisto, the devil in Goethe’s Faust whose wit lures the conscientious Doctor into profanity. Most paradoxically, Höfgen’s rendition of the role even provides the Nazi audience with a mirror of their own destructive yearnings. Szabó, more than Mann, saw that Höfgen was a product of his time. Why would the Nazis be unable to profoundly value and identify with someone capable of convincingly and passionately enunciate such lines as: “all the elements which ye/Destruction, Sin, or briefly, Evil, name/As my peculiar element I claim”?

While Hendrik Höfgen is certainly on the wrong side of the democratic process, he nevertheless succeeds in representing the degeneracy of that very process remarkably well. The real Gustav Gründgens (video captures of a 1960s version of his Mephisto are accessible on YouTube) was artistically brilliant for many reasons, one of them being precisely the fact that he updated the role of Goethe’s devil in a way that made it realistically apply to how the Nazis would have imagined the devil (and themselves) to look like. This is what comes out of Szabó’s film and may be the reason why Szabó spends so much time showing Nazi faces marveling guilelessly at Mephisto like children in a play. Szabó’s Mephisto shows that being part of a corrupted political context does not exclude an artist from successfully representing it. This, then, is the Mephisto problem.

One recent real-life example of a Mephisto problem applies to the film Zero Dark Thirty. The film, which portrays the professional life of a CIA agent who has the mission to track down Osama bin Laden, has even been compared by Naomi Wolf to the propaganda films of Leni Riefenstahl. Kathryn Bigelow, the film’s director and her screenwriter Mark Boal notoriously collaborated with the CIA in order to get first hand information about the events. In return, the CIA asked for some cuts in the script, most notably taking issue with an interrogation scene that featured a dog intimidating a detainee. Boal explained why he took it out: “We raised an objection that such tactics would not be used by the Agency.” Even though the CIA may not have done it, threatening detainees with dogs was a much discussed feature of the War on Terror.

Because of its complying relationship with the CIA, Zero Dark Thirty was quickly dismissed by a considerable segment of intellectuals, cultural critics and fellow filmmakers. Much ink has been spilled on whether the remaining 15 minutes of torture the movie depicts actually glorify torture, supposedly becoming part of the overall scheme of the movie to broadcast propaganda of the Obama administration’s violations against international justice on their way to hunt down the USA’s most wanted. Torture, the argument goes, somehow gets depicted in the film as a necessary ingredient to win this game. The ends justify the means.

With regards to the Mephisto problem, this criticism resembles Klaus Mann’s displaced disapproval of Gustav Gründgens. Why, after all, would a film about a State funded retaliation program not display torture as adequate SOP? Would it not be more propagandist, if a film about Operation Neptune Spear (the code name for the OBL hunt) would depict CIA agents and Navy Seals as outspoken opponents of torture or perhaps even as critical rationalists discussing philosophically about the political meaning of their mission? Torture in Zero Dark Thirty like the devil in Faust, remain morally wrong, even if they get portrayed sympathetically and, more importantly, even if a majority of spectators become convinced that they are morally right. In other words, that is a problem of history and society, not of the film. It is difficult to overwrite the moral wrongness of torture with intentional properties one believes are inherent to a particular depiction of torture or of the context in which it is shown.

Of course, this doesn’t mean that it is justified to comply to CIA censorship. If the only way for Bigelow to represent torture is to collaborate with the very organization whose politics brought that torture about, she has an obvious problem. But, for the sake of art, that problem is hers not that of her art, for she may still be able to make a brilliant movie. This is the question István Szabó asks in Mephisto. We may despise the moral integrity of artists like Gründges, Bigelow and their like, but if we want to criticize them, it may be useful not to project our criticism onto their art.