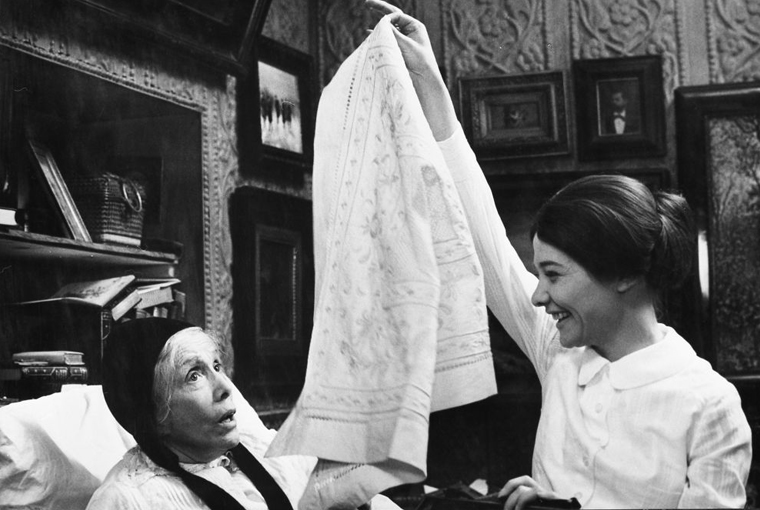 János is a political prisoner. Though the gray, middle-aged man does not appear on screen before the very last sequence, we become acquainted with his faith by way of two people worried about his disappearance: his sick mother, and his wife Luca. Luca and her step-mother do not get on very well, but the common loss brings them closer together. Concerned about the health of János’ mother, Luca begins writing letters on János’ behalf, vividly describing his fictional successes as a film director in the US. But unlike is the case in Good Bye, Lenin!, Luca doesn’t solely invent this alternate reality out of consideration. Gradually we realise that the narrative is also a way for Luca to act as if János had moved on – as if he were really in the US and she didn’t have to worry. When János is released from prison unexpectedly, Luca doesn’t appear emotionally fit to welcome him. The difficult life as the wife of a political prisoner has drawn her away from him, and perhaps, she still preferred it if he really were in the US. In Makk’s universe, life is not as innocent and simple as the title may suggest.

Last year, at the 65th edition of the Festival de Cannes, two films from the competition also had “love” in their title: Amour by Michael Haneke, and Paradise: Love by Ulrich Seidl. Besides the similar titles and the common national origin of their directors (Austria), the films also connect in their programmatic perfectionism. In both cases, a modest plot is turned into a nerve-racking psychological study told from the perspective of a displeasingly omniscient observer. And in both cases, love is handled in an explicit way. In Paradise: Love, Seidl’s first installment in his Paradise series (Paradise: Faith, the second film from the trilogy, premiered in Venice last year), love is essentially a pretext for the mutual exploitation of Austrian sex tourists and Kenyan locals. Teresa (Margarete Tiesel), the protagonist of the film, needs the foul promises of the natives to nurture the illusion of being desirable. The locals, on the other hand, need the magic word to make some much-needed money. In Seidl’s film, “love” serves as a means for getting money and sex.

In Amour, there is no such imbalance of power. The relationship of Georges (Jean-Louis Trintignant) and Anne (Emmanuelle Riva) seems authentic and sincere, if anything. But here, too, the film cannot be described as a mere study of a harmonious relationship. Haneke illustrates the sort of tasks that relationships must endure, and though it is arguable what precisely the ending implies (the suggestions range from euthanasia to murder), it is hardly a happy one. The power of Amour – apart from its ingenious orchestration, which is also a major appeal of Seidl’s film – is this couple’s relationship that oscillates between holy innocence and anger, shame, alienation. The title, then, is a superfluous reiteration of the energy that rests between Georges and Anne. Where Seidl’s title clearly diverges from the emotions expressed in his film, creating an ironic gap between the piece and its title, Amour perfectly describes the film’s theme. Károly Makk’s film, finally, is situated somewhere in between these two extremes, with the title neither contradicting nor reaffirming the film’s spirit. This is in large part due to the fact that the central relationship of the film – that of János’ wife and his step-mother -, is opaque. In fact, one could take the character constellation itself as an indicator for its ambiguousness: where an old, sophisticated couple represents intimacy and sex tourism represents foreignness, the relationship between a step-daughter and her step-mother stands for something more vague. On the one hand, the two don’t seem to get along too well, on the other hand, they are connected through János, a person they are both missing in their lives. At the very best, love is a humanistic interpretation of the relationship between step-daughter and step-mother.

Initially, one may ascribe this vagueness to the special context in which Love was conceived: Makk speaks about the political atmosphere of Hungary in the 1950s, a time when the country was ruled by Soviet puppet Mátyás Rákosi. People who had political ambitions outside the premises of the Party where seized or disappeared. Makk tries to reproduce this feeling of uncertainty – one day you’re at home, the next day you’re a political prisoner and your wife doesn’t know whether you are still alive. But Paradise: Love and Amour, in particular, deal with situations that are similarly uncertain: in Amour, Georges is long unaware of how quickly Anne’s state is deteriorating, and in Paradise: Love, Teresa does seem to doubt whether her lovers do really “love” her. The programmatic drive in Seidl’s and Haneke’s films is not caused by the subject-matter, but by the vision of the director. Even if the ending of both films might not have seemed predictable to everyone, it is clearly conceivable in both cases. This is precisely why the quality of both films was seldom matched by the quality of their reviews: it is difficult to critique either film without writing a director’s statement because the intentions of the director are so clear.

In Makk’s case, it’s all up in the air. Though, unlike for Amour or Paradise: Love, in Love there is someone who is clearly to blame for the misery on screen, Makk does not truly enforce a reading on the viewer. With its still-life aesthetics and its changing pace and atmosphere, each viewer will take home his own experience. For Makk, cinema is more personal than the clear-cut line of the Austrian directors. Amour and Paradise: Love do not seem to be exceptions though. It is safe to say that in 2012, festival films were conceived more like Kubrick and less like Cassavettes films: well-rehearsed, well-executed, well-spoken. But at the same time, they lack the sort of virtuous spontaneity that many Eastern European directors from the 1950s onwards possessed – Makk included. For a subject like love, the latter approach seems to be more suitable than the former one, but to the credit of Haneke, Makk and Seidl, it should be noted that none of the three were trying to give a definition…

If editing is a craft whose quality can be assessed objectively, then György Sívó surely deserves a lot of credit for Love. Similarly to Makk’s Cat’s Play (1972), also edited by Sívó, the narrative of the film evolves around constant flashbacks and dream sequences. Memories and phantasies invade the bedroom and merge with its everyday objects, which in turn are skillfully captured by cinematographer János Tóth. Lili Darvas, in the role of the step-mother, is brilliant and adorable, and even though Mari Törõcsik’s (Luca) and Iván Darvas’ (János) roles are less challenging, their performance, too, is rather convincing. Admittedly, Haneke’s and Seidl’s directing, cinematography and editing are no less brilliant, but perhaps this is but another reason to believe that rather than an either and or, we should advocate a coexistence of these two different directorial styles. After all, they both seem to work pretty well. 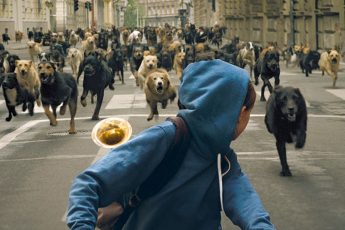