The Unbearable Weight of the Future

I understand that it’s the potato harvesting season, but we have a curriculum,” the very young woman insists. She is the only person standing in a room of twenty or thirty people, all of whom look about twice her age. They answer without vituperation or contempt, only with the puzzled, almost mirthful irritation of those faced with another person’s ethical conviction they don’t recognize. Irena Kamieńska’s 1967 thesis film Hello, Children (Dzień dobry dzieci), a profile of a rookie schoolteacher posted to a rural school, has more moral urgency than a simple portrait – it’s reality sharpened around a single conflict.

An impasse is traced in the schoolroom between parents and teacher: the children risk falling behind if they leave classes for the harvest, but the frost is coming. The parents talk over each other to reiterate their objections: even the army sends home its recruits for harvest time, and the children are needed by the adults. If a daughter is a weak student anyway, “she won’t catch up in one or two days.” The teacher seizes on this surrender of the “slow” child with indignation. “Do you think that’s fair?” she protests.

Another question remains unspoken at the meeting, though the teacher expresses it clearly enough in voice-over later on: what can be done so that these children don’t grow up just like their parents? Shouldn’t they be shielded from loutish village behavior at drunken dances, or spared the rigors of the harvest until they can fend for themselves?

Though this confrontation expresses the main problem – implicitly, a conflict as much between individual, local and state visions of the future as between two differing views of childhood – the film’s aesthetic core is the tension among the teacher, the parents, and most of all the children whose capacities and possibilities are being discussed. In the opening sequence, a voice-over introduces us to the young teacher returning to work in the province where she was raised; however, the images don’t yet show her, but linger on the grubby, shy, unfocused faces of her future pupils. The young woman is one of them, the juxtaposition suggests, and indeed her thin face would be childlike, if not for the sharpness, concentration and increasing stress discernible in it. The children, on the other hand, seem painfully lost in the classroom, unable even to repeat back the teacher’s words. She takes them all out to fly a kite; the camera zigzags wildly to capture their excitement bordering on anarchic frenzy. Plainly, it’s the first time they’ve ever seen such a wonder.

As mentioned, Hello, Children implies a conflict between national education standards and local adult tradition and needs. It’s far from a simple question of an agent of the state (an accredited teacher) righteously struggling to overcome local pigheadedness, however. Kamieńska’s camera observes the adults neutrally, even respectfully. It’s impossible not to sympathize with the beleaguered and dedicated young woman, who seems trapped between the children she’s championing and the adults she must convince, between her educated principles and her own rural childhood. “I care about these people and I need their help,” she says. “But I’m scared.” Generation change generates much pain and anxiety, a high but necessary price for progress.

In The Dam (Zapora, 1977) the conflict between state and local society becomes far more explicit. With the state represented not by a forlorn educator but a group of pompous bureaucrats, it also wears more partisan colors. It focuses on a public meeting in Maniowy, a town that will soon be demolished to make way for a national dam. The image of the river flow traverses the film. As the villagers angrily ridicule the government’s bland assurances, the water reveals its double meaning: for now, it forms a part of the locals’ landscape, a background for the silhouettes of fishermen and fording cows. Soon, it will submerge what little will remain of the old village.

A montage of village life in the middle of the film – the wooden houses, the snowy dun-colored church, the brightly-colored women in traditional kerchiefs or short skirts driving sheep and goats, the harvesters with scythes, the picturesque empty castle on the hill – segues into a mini-apocalypse as the demolitions get under way. Houses are ripped apart with pathetic groans, dirt explodes at the base of the castle. One eloquent shot shows two women calmly shearing grass across the foreground, while industrial machinery churns up the valley behind them.

Without sacrificing detail, Kamieńska doesn’t bother trying to depict the debate as two-sided. The villagers are cogent, impassioned, and sarcastic about the prospect of Maniowy being relocated. “They’re experimenting on us like guinea pigs,” one man declares. Another sneers at the idea that Maniowy will survive if its farmland is submerged: “Tourists will come to the village? […] What are tourists gonna do here? Die of hunger?”

In response, we have grand perspectives and a waggling bureaucratic finger, picked out in close-up. “Of course, the infrastructure is the key issue in the region,” explains a man in a suit, rather languidly. To which a villager responds: “You, sirs, are educated and expect the future to be this and that. We country folk can’t take it all in. You need to tell them what they’ll have tomorrow, next week and today. […] You told us all how it’d look in the future, but you didn’t tell us about now.”

From two quite different perspectives, these two films recount clashes of concepts of time: in Hello, Children, the teacher struggles to integrate forward motion into the cycle of village life, while herself in a transitional stage between youth and adulthood. The Dam, more emphatically, contrasts the abstract nature of the promised future with the very tangible details of current change. Kamieńska rejects unwarranted optimism in both cases, creating images of a frustrated Poland at once stagnating, coming apart, and fitfully regenerating. 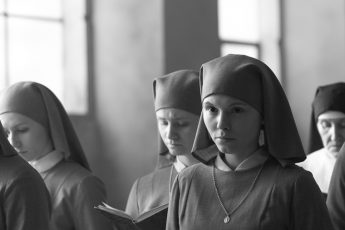 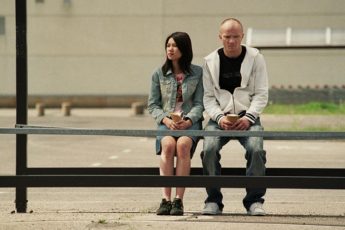