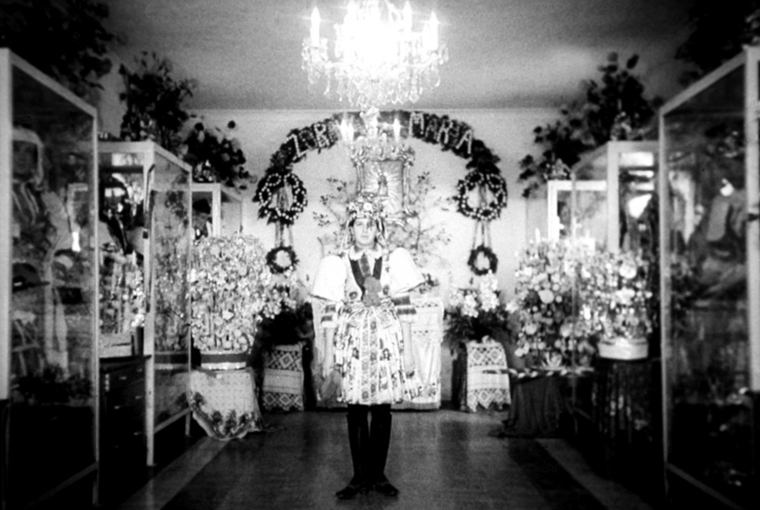 With every film a fait accompli, it’s often hard to tell what was spontaneous in a production and what was meticulously planned. Moravian Hellas (1963), a thirty-minute work of icon-bashing by two rebellious university students, is remarkable in contrast. Conceived as a fiction with a real-life folk Strážnice Folk Festival as a background, the film-in-progress went awry and director Karel Vachek decided to change his focus. The result is a disconcerting and weirdly fascinating chimaera of a film, exhibiting characteristics of both documentary and film. And in 1960s Czechoslovakia, it caused such a scandal at the Karlovy Vary Festival that an enraged President Antonin Novotný tried to forbid Vachek from filming again.

Vachek and his cameraman Jozef Ort-Šnep already had somewhat of a reputation as troublemakers at the Filmová Akademie múzických umění v Praze (FAMU), the famous national film school founded in 1946 and still training young Czechs to this day. The quality of education at FAMU contributed tremendously to the “Czechoslovak film miracle,” and alumni tend to remember the school mainly as a haven for intellectual freedom where even screenings of “ideologically failed” films like those of Antonioni, Godard and Fellini could take place. But the experience of Vachek and Ort-Šnep shows that even in this privileged artistic sanctuary, rebellion against Socialist ideals had some consequences – even during a period of thaw. Their early collaborations chafed against the boundaries of acceptable styles and approaches. During their college years, Vachek was sent to a factory for reeducation. Ort-Šnep nearly joined the Communist Party, but after reconsideration, decided to decline membership in indignation at the Party’s history of coercion of farmers into collectivized agriculture, as well as the persecution of “class enemies” during the 1950s.

According to Ort-Šnep, the proposed film that would become Moravian Hellas was not chosen for production by FAMU’s leadership, but the school allowed non-selected students to seek financing elsewhere. Vachek was able to secure support from the Short Film Studio (which, needless to say given the era, was state-controlled). Vachek at first wanted to film a story about a woman whose belly swells up in a false pregnancy after she makes love to an African man; this plan was scrapped when the budding filmmaker could not find a dark-skinned black actor for the part. (Incidentally, an African foreigner in Czechoslovakia, and the racism and alienation he encounters, would be the subject of Drahomirá Vihanova’s Fugue on Black Keys the same year; the African Students’ Union for reasons unknown refused to allow her to shoot with an African actor, so she cast a Cuban sports student instead.)

The small crew set off for Strážnice intending to film an absurdist story about a pair of twins (called simply A and B) and their encounters with a pretty young woman at the festival. Somehow, says Ort-Šnep, the elements did not cohere. It became evident that the production was not working. So the filmmakers completely switched focus, interviewing folk artists, storytellers, organizers, singers and curators. But the fictional elements remained. The result is a mix of interview footage, shots of the festival-goers, and fragments of sardonic sketches from the twins. The chaos of the film reflects the conditions in which it was made: a “very angry” festival director, a mysterious theft of the screenplay, and even a brief arrest of Vachek.

The film’s opening shot sets the tone for the “fiction” pieces: symmetrically composed, with more than a whiff of surrealism. The twins crouch under two arches in the background, mostly hidden behind a veritable army of wooden dolls. With languid voices and wandering gazes, they sing a few lines of a folksy melody, which is then taken up by voices onscreen. Then, in unison, the boys cry, “REPORTAGE!”

A montage of photographs of Old Moravia, juxtaposed with missiles and cosmonauts, plays in the archway before giving way to a wide shot of the folk parade in the streets of Strážnice. Over the footage we hear the boys continue to speak, commenting on their own work as “reporters.” “Today’s folklore is an anachronism,” they chant. “Today’s reportage is fast-paced.”

With this, Vachek has announced his warlike intentions as well as his technique: comical estrangement to emphasize the shoddy hypocrisy of what passes for folk art. The “soldiers,” armed with their microphone, appear to stumble upon a traditional sewing school. The shot of their “discovery” of the school’s sign (“State Sewing School for Girls”) is a beautifully executed tilt combined with a focus-pull – a sort of camera move more characteristic of a spy film than of serious documentaries. Once inside the girls’ school, Ort-Šnep’s camera captures the smiling female students and their teachers in a rather awkwardly lengthy group portrait. “Don’t move!” says a voice offscreen. After this cheeky “establishing shot,” the scene breaks up into a sequence that gives an impression close to chaos: two hands embroidering a cloth as a girl crouches underneath, a pan from the Nagra sound recorder to a woman hanging up a lace tablecloth, extreme close-ups of the faces of the reporter-twins and the students, views of anonymous hands at work on placemats or clothing. Voice-overs from the twins, the headmistress, and an actress playing a student intone phrases without any particular order: “I removed one of the girls because some things can be expressed better.” “The sewing school wants to establish itself on the basis of traditional sewing techniques.” “At first the headmistress forbade photographing the girls outside. A ban was put in place when I questioned the girls’ work options after graduation.” This last sentence is spoken in a hush by a twin. The actress intrudes into the medium-shot framing him. “What business of that is yours, hey?” she sneers, and the camera jumps into a disconcerting extreme close-up of her eyes and flared nostrils.

A more traditional shot frames the headmistress as she explains the school’s purpose: it’s for young girls whose families don’t wish them to work right away, but who need to “build up strength” before entering the labor force. This brief interview is followed a factory director explaining that he would not hire girls from the sewing school except for the most menial of jobs. The contrast between the schoolmistress’ words and the girls’ apparent unemployability is clear social criticism, but the film style is less straightforward. Broken into abstraction almost to the point of collage, Moravian Hellas attacks the very principles of reportage by rendering its setting impenetrable. Instead of a simple Moravian town populated by folk artists and storytellers, we are confronted with a labyrinth of fiction, real life, actors, profiteers, kitsch, and even genuine art.

Vachek is not at all unsympathetic to his interviewees. Ort-Šnep emphasizes that the team did not approach any featured folklorists with hostile intentions: those who agreed to speak, did so. Vachek himself, in an interview in Zlata Šedesata, describes his documentary philosophy as “taking care of people.” There is in Moravian Hellas a real appreciation of the last true folk artists, for example Mrs. Sochorová, the principal painter of the festival, who demonstrates her technique of window-painting with soap. (This sympathy towards Sochorová does not prevent a certain irony from emerging as she speaks enthusiastically about her products destined for American tourists.) But here, a certain understated melancholy emerges from the film, as Sochorová laments: “I’m getting old, scared of ending up blind, losing my right hand […] What will it be like when we stop? No youngsters will take over.”

Other inhabitants of Strážnice are brave enough to criticize the morals of the epoch on film. Dr Pavelčík, head of a museum in Uherský Brod, compares folklore to “a slowly dying cow at the end of her tether, and all are jumping up on her to get a last drop of milk from her, and this poor animal is not even milk-giving but blood-shedding.” Lebánek, the folk storyteller who accompanies the twins, complains that many young educated people are joining the trade and “making themselves out to be village yokels.” Another man, a folk dancer named Šopík, makes an even darker allusion. He has written a history of Kopanice from 1898 to 1945, which he has given to the museum in Brod; the history from 1945 on will be read only after his death. Why? “I’m still living, and I don’t want to be accused of anything.”

But the transformation of folk into kitsch, and its profit for all involved, constitutes the main theme of Moravian Hellas. “As far as the Restaurants and Canteens State Company is concerned, Strážnice is really a profitable event,” says Fojtik, a waiter. “I think we sold 40 to 50 liters of wine.” We see the effect of this wine later in documentary footage that shows drunks roughhousing in a field strewn with trash.

Critiquing folk culture may not seem like a particularly incendiary act, but in 1964 post-Stalinist Czechoslovakia, folklore was still considered an integral part of Socialist education and an object of reverence. The 1950s had seen an almost religious revival of folk music and customs. The reason for Communist promotion of folk values is not difficult to understand, but it is worth keeping in mind an insight from the French historian Pierre Sorlin: “Contemporary authoritarian regimes all shelter under the nation’s myths, its protection and its future.”1 In Moravian Hellas, Vachek had set out to expose the fraudulent nature of these beloved national myths, three years before Milan Kundera’s better-known demolition of Socialist folk revival in the novel The Joke, which culminates at a similar Moravian festival. Vachek and Kundera may have completely different approaches–Kundera at once intimate and wide-ranging, Vachek brash, playful and concentrated–but the same feeling emerges from both works: heavy irony overlying a sense of loss. For both artists recognize that what Czechoslovak festival planners are selling is not “real” folklore but a depressing imitation for entertaining tourists and drunks. Kundera’s disillusioned musician narrator Jaroslav (one of several), once a proponent of the folk festivals, is forced at the end of the novel to recognize that “popular art [is] losing more and more of its partisans,” that what passes for folk art is “simply old romantic musical ideas borrowing from popular melody.”2

In the end, Moravian Hellas is as much an elegy to the real-life Jaroslavs as it is a condemnation of the kitsch-hawkers in Strážnice. And a third element adds hope to this elaborate pastiche of true and false, art and sentimentality: Twins A and B and the sulky young woman they pursue are like lighthearted emissaries from the Czechoslovak New Wave about it to hit its artistic stride. If the carnival of Strážnice presents a gloomy picture, Moravian Hellas is a touching reflection of the optimism of the famed 1960s Czechoslovak generation. 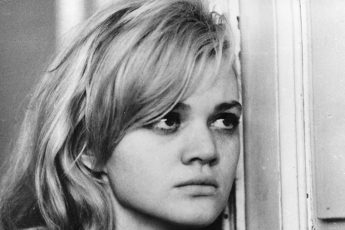