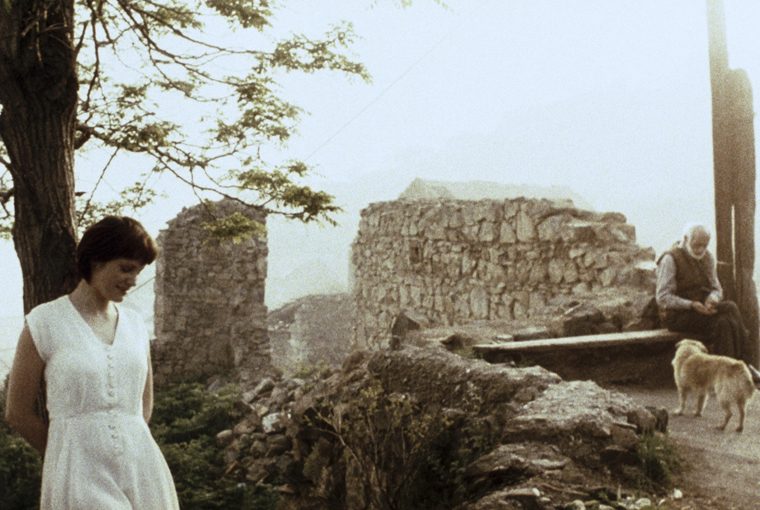 Maria Saakyan’s debut feature opens with the scene of a wedding taking place in a railway station, colorful images of people dancing to the uplifting melody of an accordion. Suddenly, a black-and-white shot interferes: we see two people dancing on a balcony to the very same music played at the wedding, only that the setting has shifted from rural to urban and the movement has changed from joyous to trance-like.

Tragedies in ancient Greece featured choruses which commented on the dramatic action, often while the chorus members performed synchronized steps. The chorus represented the polis and as such it was thought to be a vital organism that consisted of different voices that were meant to be articulated as one. The dancing and singing of the tragic chorus had a double function. On the one hand, it provided for cathartic moments of relaxation before the dramatic events that ensued, on the other, it fostered a common sense of being that implied that the collective memory was about to be triggered. In Mariya Saakyan’s Lighthouse, the opening functions like an ancient chorus: the joyful atmosphere depicted through the wedding scene immediately overwhelms you, the urge to dance naturally occurs in you.

As the scene ends, the main protagonist appears, a woman in her 20s. (The filmmaker made the Lighthouse at the age of 27, and she was the first female director to have completed a feature film in Armenia.) We are introduced to the film’s protagonist with her tomboy haircut, naive looks and a generous smile as she sleeps through a train ride. Next, the sunlight penetrates her wagon, and she opens her eyes. She has reached her destination. The daylight fades out and the grey shades of the evening cover the scenery, she walks in a village dragging a heavy coat and a suitcase, her thoughts spoken out loud:

The girl thinks in poems – a realization permitted by her aloof figure and her childish looks. Her focus on birds doesn’t come as a surprise, as the film’s choral opening had ended with two shots (again in black and white) of innumerable cranes taking to the sky. The bird reference reminds us of a poetic verse from Mikhail Kalatozov’s The Cranes Are Flying (1957) uttered in the beginning of that film. Veronika and Boris, a young couple, happily walk the streets of Moscow when they see cranes passing and Veronika starts singing to her lover:

Cranes like ships, sailing up in the sky, white ones and grey ones, with long beaks, they fly.

Mikhail Kalatozov’s film deals with the aftermath of World War II in the Soviet Union. Veronika’s character crystallizes the war’s impact on civil society and especially on Soviet women. The verse that opens the Lighthouse functions as a nod to Kalatozov’s poetic use of the cranes, and we get the feeling that the emotional impact of war may also be one of Saakyan’s themes. As night sets, Saakyan’s protagonist continues her lonely walk. She approaches a house, or rather follows the light shining from within. We can’t help but wonder if this house is the film’s title-lending lighthouse.

“Mayak” in Russian not only stands for pharos, the lighthouse. The word also brings to mind the “Mayak Production Association”, one of the biggest nuclear facilities in the Russian Federation that was also the site of the Kyshtym disaster, the second-worst Soviet nuclear accident after Chernobyl. In 1957, the explosion of a tank released tons of high-level radioactive waste that contaminated an expansive territory in the eastern Urals. In short, the burden of the word is nothing but light – “mayak” carries the traditional symbolism of the lighthouse, pointing to the distinguished building at the edge of the land which is tormented by waves and lit by a single light. But at the same time, it functions as a clin d’oeil to an obscure and hidden past (the Soviet regime kept the accident secret for about 30 years) that alerts the collective memory once more.

As C.G. Jung has pointed out, the lighthouse may be seen as the individual consciousness which kindles a light in the darkness of mere being. The archetype of a lighthouse is dark in itself, especially if we consider that lighthouses used to be built near the most dangerous of waters. As such, a lighthouse represents the peril and its flashing light is the hope of not perishing. An existential primitive feeling, both individual and collective, is carried a priori by the title of the film that reminds us also of Virgina Woolf’s To the Lighthouse. In the 1927 novel, the physical presence of the lighthouse ties the narration together and is also used as the medium through which each character’s consciousness is projected. Both Woolf and Saakyan use the archetypal symbolism of the lighthouse to explore consciousness and its conflicts, and both women focus on female interiority with the help of unique poetic vocabulary.

When Saakyan’s protagonist gets to the house, we realize that she is familiar with the items it houses – it is indeed her home. She reaches for the record player and then she opens her wardrobe. She puts on a dress and sings to the song that is being played (“Good and evil in Wonderland”). But her nostalgic reverie is ended by a power outage – the record player stops playing and an old woman suddenly appears. The two women recognize and acknowledge each other, and we learn both their names. Lena (the girl) and Kasyana (the old woman) sit close to each other, their hands positioned identically while the light of a lantern makes it easier to converse. Suddenly, electricity is restored and the women glance at the ceiling at the same time. Their synchronized emotional reaction gives away their common fear that appears to emanate from past experience. Lena touches the wall – she’s finally home.

The next morning is about to reveal village life as Lena experiences it. Mostly old women are engaged with everyday tasks that are considered to be “feminine” (washing clothes) but also traditionally “masculine” (cutting wood). The synchronization in their movements is again pointed out. The women in Saakyan’s film are shown to have each other’s back, a fact that contrasts with Kasyana’s later statement about the non-existence of mutual solidarity: “Female solidarity? What is that! We can’t even be friends!”. The focus on so-called masculine tasks intensifies when Lena tries to change a light bulb, and fails. The absence of men is utterly obvious: a war is in progress. Lena runs into a building when the sounds of a helicopter merge with those emanating from a piano. Lena bursts into a room, interrupting a piano lesson. She calls the teacher her “granny” and the brief conversation that follows reveals the plot to us. A war has been going on for two years. Lena’s father died while she had been away, and so she has returned to her grandparents. The story reflects the biography of Saakyan who, at the age of 12, fled war-torn Armenia in the 1990s.

The film’s main corpus is a sequence of scenes that are intertwined in an oneiric way with an impressive cinematography faithful to Tarkovsky’s (the film’s palette is ruled by the grey and green). What allows the film to become even more dreamy is the collapse of the narrative that blocks the audience’s view like a misty veil and makes it even harder to follow Lena’s steps. The dream sequence underscores the simultaneous need for stillness and movement that dictates not only the protagonist’s deeds, but everyone’s who is involved in this war. In a beautiful scene, Kasyana, surrounded by almond trees, confesses to Lena: “I had a dream as a girl that I was a tree. It was scary cause I couldn’t move. Then I realized I shouldn’t move because inside of me, there’s the whole world”. Soon, Lena will try to leave again, but she is forced to stay: trains have stopped running. Trapped in her home village that is torn by fires and gunshots at nighttime and unbalanced and chaotic during daytime, Lena is slowly coming to terms with the fact that she is at the right place. She realizes that her individual tragedy is also a collective one. The absurdity of war has left its mark on each and every being. Valleys, animals and musical instruments, goldfish in plastic bags and well-loaded carriages are all crossing wooden bridges, are waiting in vain for an escape route only to eventually return to their intimate streams that are now washing away dead bodies.

While her experience is being collectivized, Lena’s gaze towards her village is altered. The “sad funeral repast” that used to occur only in her poetic imagination, now becomes part of her reality. She sits on the funeral table and grieves for the loss of others, accepts her grandparents’ resolution to stay and deal with every day’s fear and distress, and when the whistle of the train finally persistently resonates and she leaves, Lena knows that her consciousness is in sync with her heart. One of the latest shots of the film depicts Lena dressed in a white dress with her hitherto infantile smile lighting up her face as she leans on a trunk and gazes at her loved ones. The tree branches are lifted where her body ends, her body is the trunk, she has become the tree. Saakyan ends her film with actual wartime footage. When the film was released, she stated that it was not meant to be political, but she is nevertheless sticking to the depiction of the conscious collective engagement to the very end.

While the closing credits roll, the second chorus of the film plays modestly in the background. Men in arms perform a traditional dance in sync while a static hypnotic rhythm is played (the film’s enchanting score was composed by Kimmo Pohjonen). With the last scene of her film, Mariya Saakyan suggests that the synchronized movement of people could go on eternally, a statement that sums up the cathartic empowerment of The Lighthouse.