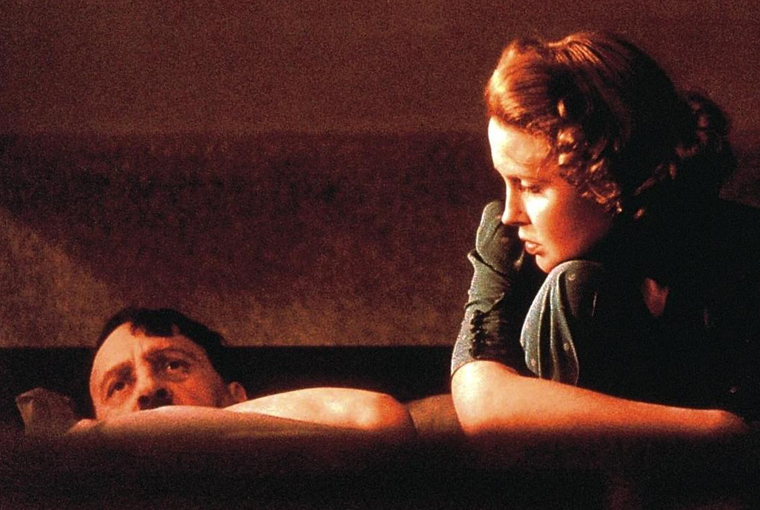 Brecht, as is well known, is the master of estrangement, or alienation, the famous theatrical effect that reminds the audience about the simple fact that the play depicted is merely theater, and that it should rather stay at distance to the things happening on stage instead of confusing itself with them. This almost self-evident idea is not as simple as it may seem. Indeed, it might even be that it is a sheer impossibility, a utopian thing-in-itself, as one somehow has to identify even when one is confronted with the most estranging endeavors of the avantgarde. The moment someone says that he is completely estranged by something he sees, even when when he sees himself seeing himself in this estranged way, he is still in some way entering a series of identificatory processes.

But luckily Brecht did not want to solve problems of solipsism in art. What he was afraid of, as I see it, was an unconscious, or passive audience too easily pleased (identification) and too little struck (estrangement) by art’s valuable messages. And yet, despite the various forms and methods Brecht invented to realize his alienation effect, it still remains a mystery how exactly one can make someone become aware of himself just by confronting him with something radically different. In a way, the process of self-awareness, or of becoming conscious is per definition a process of distance, as one is forced to see oneself from an outside (even if that outside is, strictly speaking, inside again…). But this process is happening on the side of the spectator, not on stage. And it usually happens when one identifies with one or more contradicting positions.

The problem with this kind of contradicting identification becomes most imminent when the audience is confronted with a character it doesn’t want to or shouldn’t identify with from the start. For the twentieth century, Hitler might be the most prominent example for this. He is the evil man per se, the one no one is allowed to identify with. (If anything, the recent discussions about Lars von Trier’s ambiguous comments about his sympathy for Hitler have shown precicely that). That’s why so called human portrays of Hitler, such as Bruno Ganz in Der Untergang (The Downfall) are usually perceived as provocations.

What happens here is that dramatic effects, such as music, rhythm, suspense, psycho-realist acting etc. create involuntary emotions that invite the audience to identify with what is happening on screen. These emotions can be very simple, for example impatiently awaiting Hitler’s actions, and can turn into more complex and ambiguous emotions such as empathy or fear. In both ways, however, one looses the safety of one’s distant moral standpoint. In other words, one can no longer say that Hitler’s personality outreaches human understanding and remains impossible to identify with if one is capable of identifying with him on screen. Note for example that it is never a provocation when someone says something like “this actor really played Hitler well.” Saying that Bruno Ganz “was a good Hitler”, however, already implies that the actor could somehow understand his character and that he succeeded in transmitting this insight to an audience. Nobody would ever say “this was a ‘strange’ Hitler.” What Brecht wanted, of course, was for the audience to say that Hitler was strange. But if the spectator, assuming that it is not possible to understand Hitler, thus realizes that he himself just shared with the dictator some of the things he did, he also becomes alienated from his initial parti pris. But again, he can only experience this if he truly identifies with Hitler. I don’t think Der Untergang permits this kind of identification. It seems more likely that one identifies not with Hitler himself or a very close-to-the-truth-version of him, but that one stays in the identificatory framework of today’s view on Hitler. If one says “this was a ‘good’ Hitler”, what one is really meaning, is that he still incarnated the evil man pers se. Contradicting identification doesn’t happen.

In Brecht’s play Arturo Ui, Hitler is camouflaged as a gangster, and time and setting are moved to Chicago’s twenties. These and other elements – such as verse, and above all farce – are to add to the play’s strangeness. But all these so-called effects of alienation can also be read as means of identification: generating the possibility for letting oneself be taken away by poetic beauty; the gangster story as a means for the ahistorical masses to get in touch with the past, etc. In the end, Brecht’s portrait of Hitler as Ui is quite similar to that of Chaplin’s Adenoid Hynkel in The Great Dictator. In both films, Hitler is interchangeable with no matter what other person – gangster, jewish barber, or even actor (as in To Be or not to Be). Brecht’s comedy of error, where Hitler’s identity is mistaken for Al Capone’s, is no exception to this mistaken-identity scheme. Thus the very process of being able to understand Brecht’s play is identification. In one of the most famous scenes in Brecht’s play, Hitler takes acting lessons, reasoning that it might be useful to appear authentic. Despite this metatheatrical clin d’oeil – that Hitler is exempted from the magic of Brecht’s self-conscious acting therapy in wanting to be authentic –, he is also humanized here, since we are all familiar with distress when it comes to having to talk in front of a larger audience.

For those of us who have not witnessed World War II and Hitler’s coming to power, it seems as though the most radical alienation effect thus consists in identifying with Hitler. For if one can find parallels to Hitler in one’s own identity, one’s own non-Hitlerian identity necessarily becomes alienated to itself. Discovering an unknown split in how one sees oneself always produces feelings of destabilization, enabling one to check one’s own position towards shifting points of identification. But for someone to experience a similar shifting perspective in the Germany of the 1940s seems more difficult. The modern audience will always fall back to the conclusion that Hitler was bad, that it is not good to over-identify with him, etc. But a permanent shift is demanded from the person of the 1940s already identifying with Hitler. So how much doubt must such a person endure to really change his position? I don’t know whether farce or any other clashing element could actually produce the necessary distance to see for someone truly identifying with Hitler, that something in this identification is wrong. Most likely people would have gotten angry at Brecht’s different portrayal, and those already thinking that something is wrong probably would have found their views justified, thinking that it’s true that Hitler is a criminal lunatic. In either way, identifications don’t shift. What remains true, however, is that distancing depends on each one’s ability to identify with something other than onself. One can only change perspectives if one has lived through the interference of a different one.

Sokurov’s Moloch is also a portray of Hitler, and it is a strange one indeed. This time, however, not because one is forced to feel for Hitler and thus confront one’s own contradictory feelings about oneself. Sokurov brakes with the reconstructions of historical tragedies propagated by films such as Der Untergang, Hitler – Aufstieg des Bösen or other dramatic pictures. And even though funny at times, Moloch doesn’t want to ridicule or ironize and thus also separates from Brecht, Chaplin, and Lubitsch, or the postmodern attempts to produce self-conscious fun (Syberberg). Despite of it’s fantastic elements (the rendering of Hitler’s summer residence into a Wagnerian Gralstempel) and the specific Sokurovian distanciation methods (one-dimensionality, blurred images, etc.), the film is almost a documentary-style piece.

Sokurov’s Moloch is neither tragedy nor farce. The best way to describe this film is probably with the Arandtian use of the word “banal.” Banality, for Arendt, doesn’t mean that the evil doings of the Nazis were unimportant and harmless, but that from the point of view of the specific sociopolitical framework of the Nazi’s, their actions can be explained. In other words, they had a reason, although perverse, for what they did, and were not evil for evil’s sake. In a way, they are thus inferior to the evil things they did. In Der Untergang, and Hitler – Aufstieg des Bösen (Hitler – Rise of Evil), on the contrary, the evil the Nazis do is elevated. Nazis and evil are on one level, or the Nazis are even above evil, because these films want to believe that pure evil is still more comprehensible compared to what the Nazis did. The problem with this point of view is that it obscures the Nazis. Instead of focusing on the possibilities for art to imitate evil, and to trap the spectator by confronting him with images, Sokurov counts on the spectator’s comprehension for what is happening on screen. In a way the mechanisms are reversed. In Der Untergang, one considers that what one is seeing is “unbelievable” from the start, and gradually starts to identify with that unbelievability. In Sokurov’s film, on the contrary, one first believes and understands what one sees, and then one might wonder about the fact whether it is still believable. Der Untergang and its avatars are therefore not truly alienating. They can only depict the past by making it obscurely different, paradoxically not acknowledging that they have changed, not the figures they want to portray.

Sokurov confronts our contemporary framework with that of the Nazis. The cruel activities of the Nazis appear banal, precicely because they make sense in this framework. That is why in Sokurov’s film, identities can actually shift. One can only wonder at the seriousness in which all these figures indulge in their, from our perspective, completely absurd political passions. It is this earnestness that separated Sokurov’s film from the Hitler-comedies of the 40s. Of course, today, it is no longer a question of survivability to protect oneself from the Naziss like it was for Lubitsch, Chaplin or Brecht. These artists also banalized the Nazis in an absurd way, but most of all by laughing at them in order to defend themselves from them by choosing the liberty to mock. “After a miserable war, we must write comedies. If we don’t learn to laugh at the murderer, then the murderer laughs at us”, said Novalis.

What makes their banality different from that of Sokurov’s however, is that they had to kick Hitler from his throne in order to turn him into a human and treat him as just another crazy fellow. They had to imagine a different framework in order to banalize. Sokurov, on the other hand – maybe, because he doesn’t feel the need to protect himself – takes up the point of view of the Naziss, taking them seriously. He stays on Hitler’s throne, thereby revealing a vision much closer to the perverted truth of the framework in which the Nazis were at home. Notably, Sokurov explores Hitler’s affinity for excrements (as also pointed out at length in Erich Fromm’s analysis of Hitler), his dogmatic vegetarianism, his fantasies about insects and intestinal mess. In the end, it is because Sokurov’s film seriously identifies with the Nazis that it becomes alienating. But here, unlike with tragedy or farce – one counting on pure evil, the other on an alter-egoist everyman – identification doesn’t need a different framework. 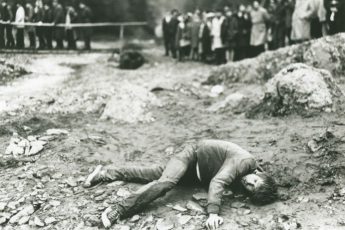