By the River Danube I Sat Down and Laughed 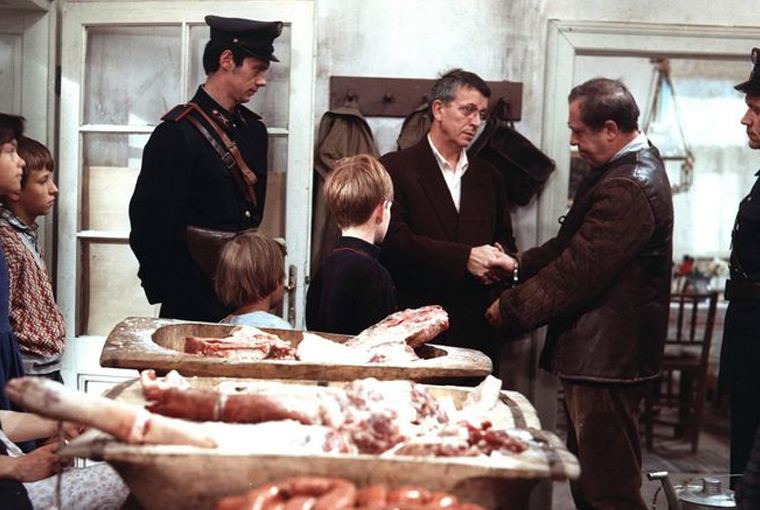 This film was banned in Hungry for more than a decade, from 1969 to 1981. Set in the 1950s, it portrays in a satiric tone a corrupt and deceitful system of government. It is not surprising therefore that it was not considered acceptable by the censors.

The main protagonist, Joszef Pelikan (Ferenc Kalla), is the warden of a section of the banks of the Danube, which runs alongside his house. Joszef is a simple man; his wife left him for someone else and he lives in a small wooden house with his many children. He goes along with the system. By chance he is a personal friend of a government minister. His life flows peacefully like the river until he gets caught up in political currents and is dragged out of his depth. He becomes involved in a series of missions involving soviet spies and schemes.

It all starts with hunger. There isn’t enough meat to go around in the village, his family is hungry, and Joszef decides to kill the family pig. Unapproved meat however is not allowed, so, along with his eldest daughter, he comes up with a plan to distract the police. The younger children, conducted by the daughter, stand over the trap door of the barn, wearing what we could imagine are their scout uniforms, singing a patriotic song, louder and louder, to cover up the squeals of the pig. However the meat is discovered, and he is sent to jail.

But Joszef soon gets caught up in a plot which is as incomprehensible to him as it is to the audience. He is quickly released from jail, but we don’t know why. He is put in charge of the local swimming pool, but this ends badly when he lets the waiting masses enter the pool while an important party member is having his private swim. The enthusiastic teenagers bombard him in the water and Joszef is subsequently sent back to jail. Following this he is again released in order to run a small funfair, the ‘English attraction park’, which he renames ‘The Attraction Park dedicated to Socialist Glory’. The new name of the amusement park might have sounded reasonable enough on paper, but when filmed it comes across as as pretentious and absurd. Joszef also renovates the ghost train. After a grand militaristic ceremony, a high official takes the first ride on the train, and faints with surprise halfway through at the sight of a huge image of himself. Of course poor Joszef is once again sent to prison. The moving-train cinematography of the scene is simple yet impressive, as we see the carriages come through the flapping doors towards us one by one.

Bacsó, who died in 2009, is now appreciated as a maker of classic satiric Hungarian films. The film is largely autobiographical. He was a friend of Imre Nagy, the postwar prime minister who lead the country towards independence from the Soviet Union but was dismissed and executed after the invasion of 1956. Joszef goes to prison four times. He is constantly buffeted by the winds of fate and seems to have no control over what happens to him, although each time he gets out of jail he seems to genuinely have all the best intentions to follow the party line. The last time he comes out of prison he is sent to be in charge of the orangery. Finally, from many trees being cared for by many scientists, one orange grows. A ceremony is organized at which a high official will taste the famous orange, but just before the ceremony Joszef’s young son eats it, so it is replaced by a lemon, which is renamed the Hungarian Orange and celebrated on radio and television.

The continual failure of the protagonist’s schemes (the funfair ride, the municipal swimming pool, the orange orchard) might be interpreted as showing the impossibility of progress in a too-rigid system which cannot support the inevitable mistakes in the process of change, but will accept a bitter lie. Joszef is shown as naive, but he constantly questions what is going on around him. When finally it is revealed that the plan all along has been to make him give testimony against his friend the Minister and denounce him as a traitor, he turns this naivety to his advantage. He forgets his text for the trial (everything to be said, including the verdict, has been prepared in advance), and mixes up the words, seemingly unintentionally, while claiming all along ‘I’m stupid’. The trial is exposed as a farce, at least to us. It’s clear that it’s the system that’s stupid.