I is an Other 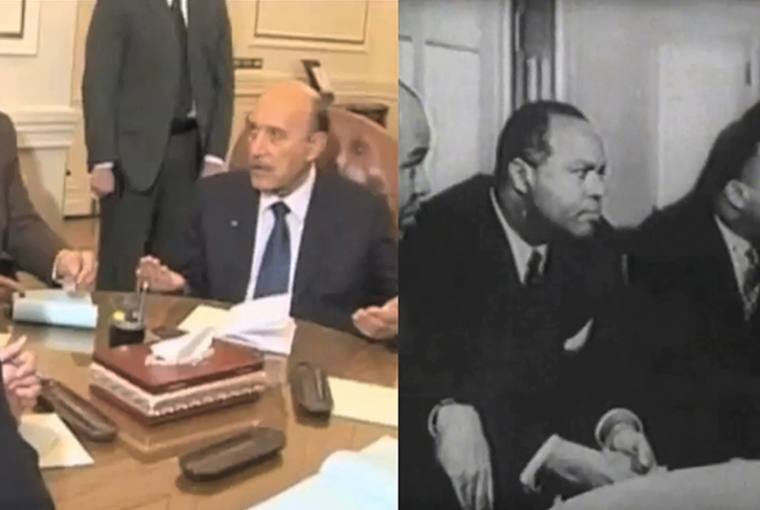 It is wrong to say: I think. One ought to say: people think me. – Arthur Rimbaud

When they approach me they see only my surroundings, themselves, or figments of their imagination – indeed, everything and anything except me. – Ralph Ellison

The ‘other’ is often conceived of as an opposite, sometimes treated as an unknown. Encountering another can also be thought of as a transformation, or at least an opportunity for such. The principle of dialectics has it that a thesis plus its antithesis produce a sublimated synthesis. Do we improve and refine ourselves when we encounter another, or do we divert and suppress? This is a crucial political question in today’s world, one that is addressed in the short film program of the Beyond Belonging section at this year’s goEast film festival.

The program begins with The End The End (Koniec Koniec, 1979), Jadwiga Singer’s portrait of a man eating a meal. The image is paired onscreen with its double which is positioned from the opposite end of the timeline – two temporalities within the same frame, two individuals who might be said to be in an encounter with each other (which is in actuality an encounter with the self). One enacts the other’s future and this other enacts its counterpart’s past, yielding a perfect existential loop.

Ping Pong (1976-78) by Ivan Ladislav Galeta builds upon this idea of mirroring and the resultant othering. A table tennis athlete encounters his opponent both on the field of play and through the video apparatus. Positions are exchanged, views are rearranged, and the possibilities of defining oneself in relation to another are multiplied. One cannot play the game of life alone, and among the many trompe l’oeils that Galeta creates, he never situates a player by himself. Serves are played in an echo chamber of existence.

From Me to You (Od mene do tebe, 1972) by Miodrag Tarana & Mirko Avramović turns camerawork into a sport, a dance even. Here we have co-directors or co-cameramen exploring the formal possibilities of collaboration. The very title of the film suggests a passage or a transfer, a dialogue carried out using the language of cinema. The various attempts to get a good vantage point for seeing the other, therefore understanding the other, rendering a proper image of the other, are ethical concerns of the highest order.

Scusa Signorina (1963) by Mihovil Pansini represents a particular strain of experimentalism in 1960s Yugoslavia called antifilm, which was initiated and theorized by Pansini himself. As the name indicates, antifilm radically rejected the status quo in aesthetics, production conditions, and politics. Pansini strapped the camera onto his back and walked through the streets of Zagreb, letting his mise en scène be dictated by chance. While this results in a fascinating formal experiment, there are also other elements to read in between the frames. The title of the film suggests a personal encounter, its formality masking the sexual innuendo that the phrase denoted at the time. Propriety is not a concern in this unruly film, and expectations are constantly subverted. One of the more interesting features of the film is its flânerie and the unexpressed desire to be one with the various passersby on the streets, but also the impossibility of forging connections under such distancing conditions. There is an emotional core struggling to break free from within this strident, abstract experiment. Pansini’s film is a search for the path back to the personal that is put to the test by his passionate rejection and exploration of the superficial and inessential in cinema.

La Popolazione (1982) by Davorin Marc approaches from the opposite end of the equation proposed by Scusa Signorina. In this film close relationships are foregrounded. The director highlights them through the use of interstitial moments, when the subjects assume the camera is not recording and give themselves over to the impromptu and the nonsensical. The idea being that these disposable cut-outs are the very material that binds people. These moments remain and somehow persist despite their inessential nature.

In Tomislav Gotovac’s masterpiece Blue Rider (Plavi jahač, 1964) the politics of othering become explicit. The film is often celebrated for its documentary qualities, and for the subversive staging of unpredictable encounters in various Belgrade cafes. Indeed encountering the other produces surprising results in this film, results of embracing, rejection, nonchalance. While these variations are cataloged by the camera, the soundtrack introduces an ideological parable excerpted from the American television series Bonanza. Selected dialogues speak about racial intolerance and rabid nationalism, and about the criminality of frontier politics in the Old West. Gotovac’s embedded message is that othering should be opposed; his film form takes the shape of a humanist gesture. By referencing Bonanza, a Hollywood production, and Der Blaue Reiter, a German avant-garde movement, Gotovac channels a transnational and intermedial critique of the status quo and the lay intolerance that drives it.

In contrast, Now and Then (2012) by Nina Wiesnagrotzki serves as a juncture between the old and the new in terms of the politics of social engagement and the cinematic treatment of public protest. The film uses a split screen to juxtapose images from the iconic revolutionary essay film Now (1965) by Santiago Alvarez alongside images of contemporary civil disobedience. In this work the other has a collective dimension, offering the prospect of finding oneself in the dispersed subjectivity of a mass movement. Collective action against injustice and for social change would be the ideal result of locating the “I” in the “other”. There is a further critical point made in Wiesnagrotzki’s cine-essay homage, a cautionary note not unlike the explicit warning heard at the end of Gotovac’s film. In comparing now and then, one can see that little has changed and that history indeed repeats itself. The struggle is incessant and spans generations, which is both its success and failure.

The search for ourselves and our place in society alongside others takes a subjective turn in Sylvia Schedelbauer’s Sounding Glass (2011). A man stands alone in the forest, countering the gaze of the camera with his own inquisitive stare as a flood of visuals narrates a wandering consciousness. Are we invisible to him, or is he invisible to us, camouflaged by the forest that surrounds him and by the syncopated montage that connects him to the image flow? Schedelbauer’s work departs from Wiesnagrotzki’s in that it is digressive and not dialectical. Yet the film’s title evokes both the polemical and the analytical by alternating the concepts of a sounding board and a looking glass: here ideas can be tested and pictures magnified.

The inability to speak and behave properly – what others consider as proper – is explored in the film Postcards (Razglednice, 2013) by Ana Hušman. The others within one’s own family are the subjects of this film, separated from their kin by a geographical distance that becomes a gap in understanding. Hušman satirizes our conceptions of each other – the way we think about each other, and the way we want others to think about ourselves. The postcards referenced in the title come from a strange land where people talk, act and think differently. Journeying to this far-off land to resolve differences is arduous. When we look into the mirror we see how far we have to go. But all mirrors are convex. The only representative lens through which to view and understand ourselves are the eyes of those that look back at us.