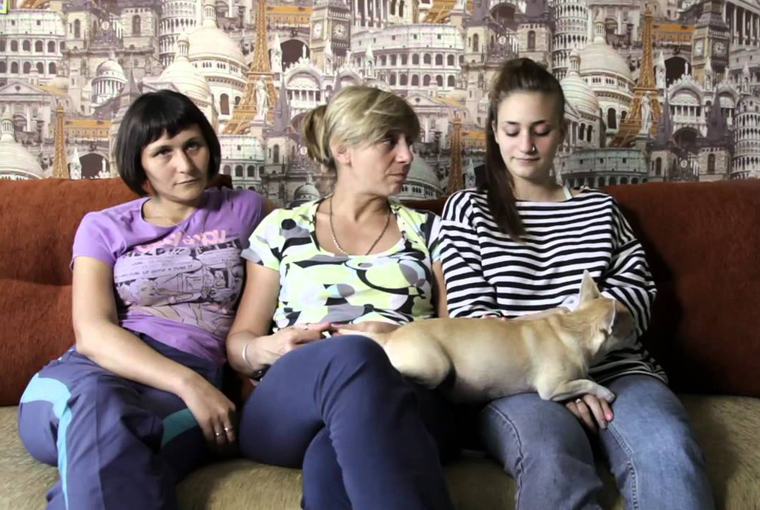 A special section of this year’s goEast Film Festival is dedicated to the subject of Othering. Othering is most prevalent in contexts of discrimination, in which people or a group of people are constructed as “others”. This means that they are often represented as abnormal and contrasted with what is considered the social norm. Several different social categories are affected by such structures of exclusion: ethnicity, nationality, gender and sexuality, disability – just to name a few. Those categories are always intersecting with each other, like in the case of Oleg Mavromati’s experimental documentary No Place for Fools, in which the protagonist is mentally challenged and homosexual. The films No Place for Fools, Karolina Bielawska’s Call me Marianna and Alina Rudnistkaya’s Victory Day all deal with the issues of gender and sexuality, whereas Call me Marianna confronts the viewer with the thin lines between genders so that the the topic of sexuality stays in the background.

Closely related to the concept of “Othering” are Judith Butler’s philosophical theories about gender performance.​1​ Butler’s notion of people “performing” gender in a theatrical way is strongly related to socially constructed norms. Those norms strictly divide gender into men and women, male and female, who only have heterosexual desires. Butler calls this binary system “heterosexual matrix”. Her point is that people do not perform gender by free will but according to that matrix. They try to be as non-ambiguous as possible in their performances in order to “culturally survive” in it: “gender is a project that has cultural survival at its end.”​1​ Otherwise they risk being excluded from the norm and have to suffer from ruthless social punishments. People are thus forced to be clear and explicit about their gender and sexuality. Another important aspect in that context is that the heterosexual matrix is sustained by those whose performance is non-ambiguous. For Butler, people who are ambiguous about their gender are always caught between the social construction of the heterosexual matrix, and the inner feeling of being different from that. It could be suggested, that those who are excluded from the norm and constructed as “others”, are confronted with the experience of “othering”.

All of the three films discussed here, represent the concept of “othering” and the protagonists’ exclusion of the heterosexual matrix by showing two worlds that are opposed to each other. On the one hand, there is the inner world of the protagonists; on the other hand there is the outside world and the daily environment they have to deal with. However, the films strongly differ in their use of filmic strategies to represent these two separate levels and the conflicts resulting out of their tension.

Marianna, the main protagonist in Call me Marianna, is a 47 year-old transsexual woman, who wrote a theater play in which she deals with her past. There is a stage, a table, a reduced black background and only a single spotlight on the center of the stage. A male actor and a female actress sit at the table and read dialogues Marianna had with her ex-wife. Those sequences represent the inner conflict of Marianna after her decision to change her life and perform a female gender.

In many sequences we get a close look into her private life and the problems she has to deal with as a transsexual.

“I’ll finally be able look at myself in the mirror naked and not feel disgusted by my own body.”

“There are men and women. There is male and female. The world doesn’t really allow any third options. If you have any doubts about whether you fit this division…Too bad for you. You are an outcast. You are seen as a troublemaker.”

“I must live up to the stereotype!”

“Yes. You disrupt the divine order, as some people phrase it.”

This is a dialogue between Marianna and her treating doctor, just before her sex- reassignment surgery. “The divine order” is a very well-chosen expression, and closely relates to the notion of Butler’s “heterosexual matrix”: both are describing the excluding strategies of the norm and the construction of the “other” that go with it. Later in the film, after the sex reassignment surgery, Marianna has a conversation with a good friend of hers:

“If you passed me on the street, would you think I’m a weirdo? Or just a normal, tall lady? Be honest.”

Those dialogues point to a crucial aspect of gender in our society: the heteronormative and heterosexual structures don’t allow for “any third options”, as the doctor calls it. This is the trouble Marianna has to go through in the film Call me Marianna: the constant conflict between her performance as a woman and the strict and sometimes brutal restrictions of the outer world that are constantly constructing her as an “other”. Still one, perhaps provocative question remains: what if there were any third options? What if the two worlds would not collide in Marianna? Would she still want to torture her body for a sex change?

In Victory Day there is a very clear separation between the Russian public life and the closed and private places of the protagonists who are all being interviewed by the director. While there is a huge celebration of the Russian public holiday “Victory Day” on the streets of St. Petersburg, the protagonists sit in their apartments and talk about their lives and struggles as homosexual couples, directly into the camera. “Victory Day” celebrates Russian nationalism and the victory over Nazi-Germany at the end of World War 2. There are many Russian flags and military parades on the streets. Occasionally the interviewees watch speeches and videos from public television on the internet that show state propaganda against homosexuals, and private videos of discriminatory violence on the streets of Russian cities. It is the confrontation between their own personal world and the harsh discrimination in the public sphere they have to face every time they are crossing the borders between the inner and the outer world. Extraordinary about this construction is that inside their homes the protagonists are represented as completely “normal” and in peace with themselves. The director lets them speak in a relaxed and natural surrounding as experts while the outside world is only presented on an indirect and more irritating level. This way the audience gets very close to the protagonists and experiences them as totally “normal”.

The fact that the protagonists of Call me Marianna and Victory Day are explicit and clear allows the spectator to feel with them. We can relate to them through the empathetic way they are represented and constructed: the protagonists seem trustworthy.

Crucial to that aspect is that the protagonists in both films are represented by a third person, the director, who is communicating their stories and characters to the spectator. In Victory Day the director is constructing them as experts by interviewing them in their private environments. In Call Me Marianna the main characters’ perspective is mainly represented by the elements of the theater play that address Marianna’s perception of her past and the personal development during the process of her sex change. In No Place For Fools the audiovisual material is filmed by the protagonist himself. He is directly speaking into the camera while he films himself from a very close and low angle view beneath his head. He only depicts his immediate personal surroundings, like his apartment, for instance. The spectator is totally dependent on his, mostly irritating, subjective perspective and voiceover, and is thus helplessly caught in his point of view.

In No Place For Fools, the protagonist Sergey Astahov is thus constructed in a totally different way: he is not reliable in his observation of reality, but somehow exhausting and stressful in the manner he switches constantly between outing himself as a gay person and describing himself from a radically discriminatory point of view (namely as an orthodox pro-Putin activist). Where the juxtaposition of the inner and outer worlds is concerned, No Place for Fools is, without any doubt, the most radical film. The experimental documentary is made by the Russian political artist and activist Oleg Mavromati who is currently living in exile. The film is completely made of non-fictional internet-videos from the personal Youtube channel of Astahov on the one hand, and of vlog (video blog) films on the other. The vlog-films slowly enhance the apocalyptic image the director is painting of Russia: from the irritating dance of a lonely woman on a street festival (the video is played backwards) to a brutal fight between two persons over garbage, a man who is brutally being thrown out of a hospital, a huge explosion on the freeway, another person who is maiming himself and jumping out of a window and several suicides. Finally a video shows a terrifying fire in a building from which people try to rescue themselves by hanging outside the window. The construction of the outside world is apocalyptic, dark and intense. Another very challenging aspect of the film is that even the inner world of the protagonist is constructed as an “other”. The audience is confronted with a person who is hard to “accept” and to trust, mainly because of the intersection of mental illness and homosexuality. The two worlds are not colliding this time – they are merging. That is the crucial element of the film. We, the audience, have to ask ourselves: who do I accept as a person? Is there a place for fools in my world?