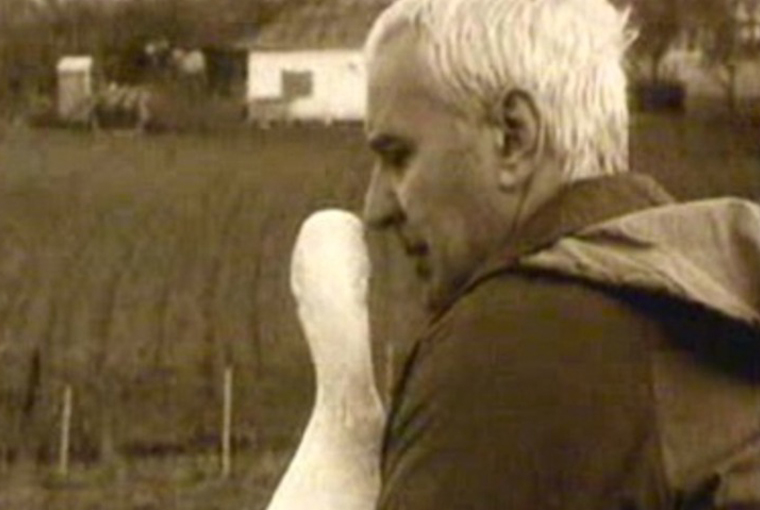 Sinisa Dragin is a Serbian-Romanian director. He was born in Yugoslavia, but graduated from the Academy of Film and Theater in Bucharest. His experience as cameraman for Reuters led him to the documentary format and motivated his preference for contemporary issues. Among his prize-winning documentaries are Long Journey by Train (1997), The Pharaoh (2004), and Where Europe ends (2009). His latest film, If the Seed Doesn’t Die (2010) is set in both Romania and Serbia with a Balkan post-war background. In 2002, he made his fiction debut with Everyday God kisses us on the mouth.

Everyday starts with Dumitru’s release from prison where he was doing time for homicide. Dumitru is a butcher. He likes women, drinking, and playing poker. On the train that takes him home, Dumitru plays cards with a gypsy man, winning from him a goose and the gypsy’s wife. When the gypsy starts playing foul after loosing, Dumitru kills him, this being the first of a series of sadistic crimes. This first part of the movie, the return, builds up a gradual tension: Dumitru’s brother got his wife pregnant when he was in jail, and revenge seems to be an inevitable outcome of this conflict.

Tormented by doubtful thoughts, Dumitru decides to kill his brother. On the night of the murder, the house where Dumitru’s wife and mother are staying is set on fire by a group of men avenging the homicide on the train. Dumitru escapes searching for his father (or the Father), meanwhile killing more and more people. The second part of the movie depicts this continuous escape from place to place, Dumitru leaving a crime behind each time. Even if he is tired of life and he wishes to die at one point, something keeps him going. But then he suddenly realizes that God has a plan with him. Stunned about the fact that he is still alive, Dumitru concludes that God does not want him to die – madness and mysticism become two oscillating poles towards the end of the film.

The film has several layers. At first glance, it seems to be the story of a serial killer who commits a couple of crimes out of primitive impulses. But soon, we start to think that Dumitru is a kind man. Of course, from the standpoint of the law, his actions are reprehensible, but the story seems to transcend the psycho-social problematic into a symbolic, religious one. Thus, the movie can also be seen as a parable for the search after God, which is difficult, of course, as murder might not be the most recomendable stratagem to reach that goal. Does Dumitru really care about God? Finally, all that he seems to be asking for is salvation, or death.

The movie also has a specific social backdrop. One can tell that Dumitru gets out of jail after the fall of Communism. In his village, people are telling him that things have been changing, but every time he answers: “Change my ass”. Indeed, the life in his village is still poor and patriarchally organized. People’s morals are deceiving and they seem to be as ready to commit a crime as Dumitru is. According to some critics, the bleak universe that the film depicts seems to be specific of that period after the fall of Communism (characterized by corruption, immorality and debauchery), as well as of the region of both Eastern Europe and the Balkans (by using some folklore elements, myths, music, the mixture of reality and dream images). But it is also worth seeing the film for the way it encompasses the Dostoievskian problem of God, surpassing the geographical and temporal limits. Even if it is not the kind of movie that one could enthusiastically recommend to friends, it captures the viewer’s attention from beginning till end, meanwhile asking two important questions: what is crime, and how is it connected to faith and divinity? 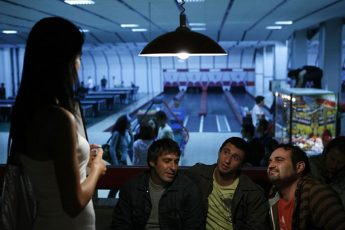