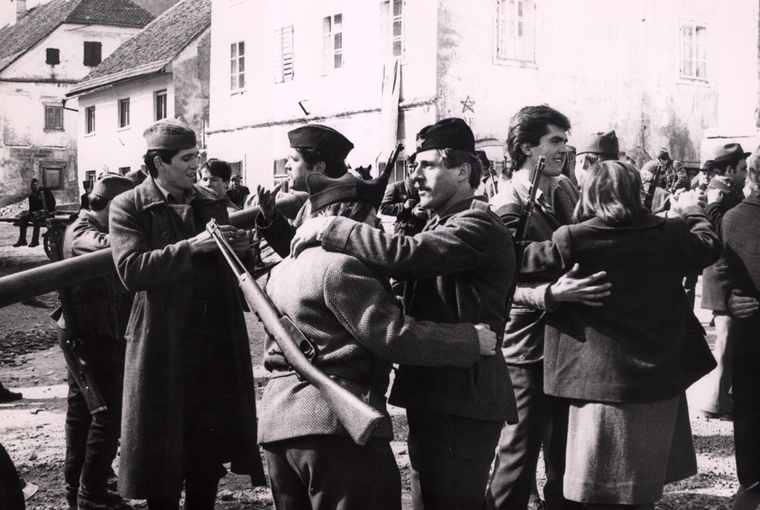 See You in the Next War by Živojin Pavlović revolves around Berk, a young Slovenian from the city, who joins the partisans in their fight against the Nazis during the Second World War. Though Berk is less convinced of Communism than the people in his environment, he agrees with the main message of the partisans (“Death to Fascism!”), soon finding himself at the front. Meanwhile, a subplot emerges in which Berk meets a German tourist in Spain some years after the war. Though some have described the plot as two stories evolving parallely, the subplot in Spain is essentially a reflection upon the Second World War, a sort of live commentary in which Berk and his counterpart (who also fought in that war) debate the emotional, political and philosophical dimensions of the war.

The strategy of the filmmaker, it seems, rests upon the same principle as that of the partisans as described in the film: improvisation. Consequently, the border between intentional and unintentional randomness is blurry. While Pavlović’s integration of different historical periods into the film is likeable (among the images of wounded Partisans fleeing the Nazis, Roman soldiers and actors in Baroque costumes gesture towards the irrelevance of historical periods when it comes to wars and suffering), most scenes are characterized by a disagreeable air of aimlessness. As the film follows a loose plot and Berk becomes acquainted with the reality of war, Pavlović employs extreme plot twists (e.g. death or rape) that seem as unprocessed and random as one would imagine them to be in a real war. Unfortunately, this realist touch doesn’t seem to work for Pavlović, as nearly all scenes in the film feel interchangeable, and, worse yet, fully dispensable.

Constantly, Berk is being told how the world has become different – today it’s war times, tomorrow peace reigns. His credulous peers are quick to reiterate the views of the dominant force in the country. But in fact, Berk can hardly spot a change. This is a common Eastern European experience: for many nations, 1989 hasn’t brought about what had been promised to them, and so the Mercedes and Audi commercials seem just as distant today as they did in the 1980s. It’s as if the wallpaper has been changed, while behind it the same porous wall carries the load of the building. A recurring scene in the film is that of Berk and a minor character promenading a location while exchanging pseudo-philosophical wisdoms. As the camera tracks the dialogues, Jesus, Socrates, Giordano Bruno, Stalin and Hitler all lend their names to these ever-repeating conversations which, sooner or later, culminate in the comprehension that nothing is the way it seems, that war is terrible and absurd but somehow inevitable, and, most importantly, that the present can never escape the past (that “the war is over” is the ultimate illusion in Pavlović’s universe). The film thus highlights a problem that is diametrical to that which many have had with Underground: where Kusturica is ambiguous, Pavlović is violently unequivocal. That the latter is no better than the former is proven by this film. See You in the Next War – though pacifist at heart – unfolds like a propaganda film where nothing is left to chance, the ultimate goal being to get the message across.

And yet, intentional confusion reigns both in this piece and other Balkan films of the 1980s and 1990s – not in a political sense, but first and foremost with regard to the narrative. In films by Emir Kusturica, Dušan Makavejev or Pavlović, it is pure anarchy that tends to take hold of the action, overriding the basic premises of dramaturgy. Sex, comedy and music continue where politics left off. In fact, this persistent disorientation forms a fitting parallel to Balkan identity, which is characterized by the lack of consistent historical or national narratives. At the most basic level, this can indeed be explained by the fact that the Balkan itself is partly a historical construct: as is the case for the whole of Eastern Europe, cultural and social parallels are as common as differences among Balkan nations. But ironically, it is precisely this systematic disorientation that connects Balkan films of the time, giving them a common denominator. Though nevertheless, these films differ greatly in quality and substance, unity in disunity it is…

[An earlier version of this article wrongly referred to the Serbian title as the original title of the film, also claiming that the main protagonist – like the director – is Serbian, not Slovenian] 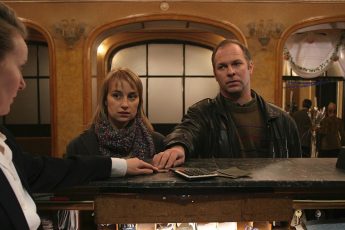