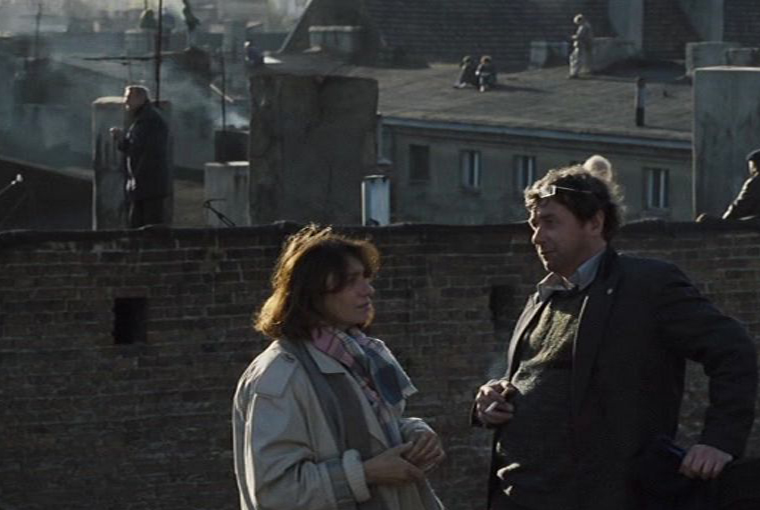 Thus begins a short monologue which opens Wojciech Marczewski’s Escape from the ‘Liberty’ Cinema (1990), in which a Polish state censor (Janusz Gajos) is disabused of just such fundamentalist beliefs about cinema and the world through a number of odd incidents which occur at a local theater. There, the characters of a mainstream film start interacting with the viewers during an ordinary screening. Every time the film is screened, the characters reappear in their altered state, throwing insults at the audience. At a later stage, they are even joined by Tom Baxter, a character from Woody Allen’s Purple Rose of Cairo (1985), who ends up on screen because of a mash-up in the projection room. While deeply dissimilar in style and atmosphere, Allen and Marczewski often meet on similar ground when it comes to their opinions about truth and fantasy. Notably, they suggest that the stark dichotomy between reality and fantasy is misleading when we turn to reality alone and expect to find continuity.

Woody Allen’s The Purple Rose of Cairo revolves around Cecilia, a young waitress with an abusive husband (oddly enough, a 1985 New York Times review claims he “isn’t a bad sort, really”) who spends her evenings at the movies until her favorite character leaves the screen to live with her – a love story that does ironically sound more perfect than it is presented in the film because Tom Baxter is terribly gauche off the screen. More importantly, the producers and the actor who created him want him back in the movie, giving rise to a lengthy chase. Thus, the comic context in which Baxter ends up off the screen is already widely dissimilar to that of the Polish actors whose rebellion is initially caused by the noble refusal of a lead character to die without dignity. Still more interesting is the fact that whereas Cecilia is repeatedly confronted with the unfairness of life, the censor can adapt his model of the world to a reality in which censorship is not an art, freedom is laudable and ideology secondary (with minimal effort). Surprisingly, the world that appears more naive resists change, whereas Marczewski’s grim tale offers us utopian redemption.

In both films, much of the focus lays on the connection of cinema and the character’s lives. Cecilia’s obsession for films is eye-catching, but at no point is it pathologized. The screenings she attends are rife people while her repertoire seems to mainly consist of classics. When her sister catches her daydreaming, inquiring what it is she’s thinking about, she names “a penthouse… the desert… kissing on a dance floor”. Still, her daily routine is depicted as being almost spiritually informed; there is something divine about her habit – not just to her, but also to us as the viewers. Here is someone who appreciates the magic of cinema passionately and in spite of its deceptive powers (or is it because of them?). In Escape, the downside of this uninhibited acceptance is shown, though it is worth thinking about why rebellion seems to origin on screen. On the one hand, there are clear references to social ruptures that are independent from the screen: a Solidarnosc poster hangs in the projection room while our protagonist himself mentions the abandonment of censorship in his opening monologue. Yet, it’s the film that spurs people to riot and perform arias (not even the local politburo boss can resist this impulse). Indeed, head censor Rabkiewicz best describes what Marczewski might have had in mind: “This was a mutiny of matter. People have stopped revolting and so the rebellion has moved to matter.” In other words, censorship is hopeless because it only treats symptoms so that dissent will ultimately find a way out to the public.

Of course, the screen is no sacred place which promises freedom of expression – this is a truth many Polish directors, including Marczewski, had to learn the hard way (most notably after the introduction of martial law in Poland in ’81). Certainly, this makes the film’s fidelity to political reality arguable – that is, unless we understand this metaphor more abstractly, ignoring the cinematic setting. Either way, on Marczewski’s terms, it is the artist who acts as a catalyst for making social change, the crucial condition (besides political reality) being the matureness of society: in Escape, the ruptures start taking place (or reemerge) because the audience and ultimately the censor answer the calls of the fictional world. In contrast, nothing changes in the reality on or off screen in Depression-stricken New Jersey because people demand continuity. As one disconcerted viewer complains to the manager, “I want what happened in the movie last week to happen this week – otherwise, what’s life all about anyway?”.

In the end of The Purple Rose of Cairo, Cecilia must decide between the character and its creator (fantasy man vs. Hollywood star), a dilemma that spills over into discussions of onotological nuance:

Can he? In Allen’s film, a comedy, adapting to reality means learning about love-making (there is no fade-out after kissing), pregnancies, real money and cars (they don’t start without a key). In Poland, 1980 was the last strong year for cinema before the martial law came and moving from the screen into reality would most likely seem quite gray. Admittedly, Cecilia’s world is also pale objectively, yet it’s hard to keep that in mind when we see the story unfold (too much glamour seeps through to her world in the course of the story). Indeed, reality is nothing like fantasy, but is reality anything like what it itself appears to be? Again, the answer for both Allen’s universe (in which the real world also cheats Cecilia) and that of Marczewski is no. In Escape, peace and order only prevail as long as the façade of the system prevails, and with it that of its employees. Referring to the screening and its impact, a state bureaucrat comments: “They have started to believe that they are free. Nothing will stop them”.

But after watching Escape, the question to be answered is “what now”? Luckily, Poles weren’t as quick to adopt Western artistic formulas as political and economic ones. Woody Allen’s film, too, is referenced with a tone of ironic reservation – at no point is it implied that this is the right way of making films (although surely there is a reason why an American film is referenced rather than a Soviet one). Still, Escape from the ‘Liberty’ Cinema is diagnostic, not theurapeutic: the escape plan it lays forward is perfunctory at best. If we give up censorship, should our stories feed fantasy and escapism or should they confront us with reality? Polish cinema has followed both approaches since ‘89, with historical epics and production-value flicks on the one hand, and stories about religion, sex, homosexuality, generational conflicts, poverty, drugs, nationalism, xenophobia, depression and suicide on the other. At neither extreme has the disappearance of the censorship apparatus and the appearance of a comprehensive funding system generated a qualitative standard. For all the misfortunes that censorship causes, no formula and no set of political conditions can guarantee the emergence of a national film culture. Indeed, in Poland the necessity of a sublimation of cinematic narratives hasn’t ended with the fall of the iron curtain…