More than a Familiar Face 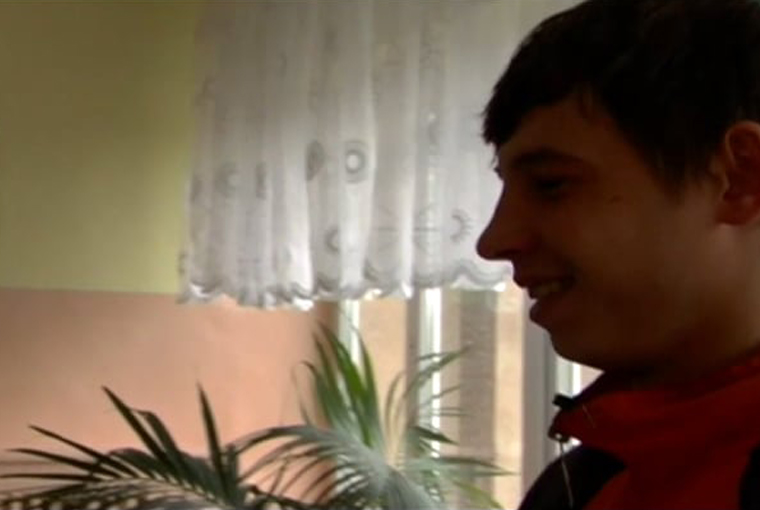 Four recent films by two young Polish artists bear witness to a new period of cinematic fertility on the Polish front. Tomez Jeziorski, only 27 years old, directed Oboz (Camp) and Kolorowe dni (Happy Days), two troubling and beautiful sketches of particularly alienated individuals. A graduate of University of Warsaw and the Polish National Film, Television and Theatre School in Lodz, he now works as a video designer for theater pieces like Life and Death of Marina Abramovic (Manchester International Festival, 2011) and Grace for Grace (Opéra de Monte Carlo, 2011). Jeziorski spends his summers as an artist-in-residence at the Watermill Center in Long Island, NY.

Karol Starnawski is even younger, but his film short, Drogi Karolu (Dear Karol), made when he was only 20, is no less remarkable. Like Jeziorski’s films, Drogi Karolu provides an intimate look at alienation, although instead of following an exploited wife or child, Drogi puts the camera directly into the hands of its dynamic main character. Thus far, the film has encountered success at the Planete Doc film festival in Warsaw and the fifth annual Two Riversides Film and Art Festival in Kazimierz Dolny. Starnawski’s more recent film, Kawaler (The Single), treats a more traditional subject with a more traditional narrative style and unsurprisingly, has less to offer. That said, it provides a backdrop for Starnawski’s cinematographic skills and he continues to be a director to follow.

The short documentary Oboz shows us a summer weight-loss camp for children with surprising insight and depth. In the first few scenes, we follow the campers haplessly doing kick-boxing exercises, being yelled at by their coach, being admonished for buying chips, and having room checks. The head coach, a fit yet constantly-transpiring twenty-something, is portrayed as angry and unsympathetic, but also as wildly desperate. He looks close to a breakdown and whether that is due to the children’s performance or to his own life is for the spectator to decide.

The children are sullen and miserable, but at times giggly or contemplative. The campers participate in a group therapy session where they are asked, “what do you think of the word ‘diet’?” One girl responds that her mother had a concussion, can barely walk, and if she doesn’t “lose kilograms (through a diet), she will die”. This small personal aside death contrasts with the trainer’s banal and clichéd speech on positively connotating “diet”. The rest of the film follows the same young girl as she participates in athletic and social activities, with other nuanced glimpses into her search for confidence, sense, and self in the world.

Happy Days, also by Jeziorski, is a fictional short film that opens onto a hospital. It is Ewa’s last day of work as a nurse before retirement, and her colleagues are saying goodbye. “Finally, you’ll have a rest!” says one, and another gives her a jigsaw puzzle of a tropical beach scene.

At home, Ewa’s family is less appreciative and Ewa seems less at ease. Her husband can’t stop watching television, her son is on the computer, and it is difficult to tell if Ewa’s efforts to help them (“Remember to drink the milk in the refrigerator before it goes bad!”) are overbearing or unappreciated.

This becomes a pattern in the film. Either her husband is completely deadbeat or Ewa is a nag. Either her doctor is wrong or Ewa needlessly worries that she has health issues. The film does not condemn the actions or personalities of any of the characters. Ewa tries to change their lives by planning a vacation and setting up her son with a Jehovah’s Witness in a particularly awkward (but sweet) scene. Yet these efforts are to no avail. The film poignantly shows us how difficult it is to escape entrenched relationships and habits, and how one woman is trapped within them. It is not until the end of the film that we see how Ewa can finally escape…

Dear Karol begins with a letter to the director (Karol Starnawski) from his neighbor. The neighbor would like to be in one of Karol’s films, but his father just died and he has no cell phone, so it’s a rather difficult time.

After, the stage is set: “Today we have Monday” (states the narrator). “And it’s a day like every Day. Look AT this. What a sensational driver (as the camera peers out a window towards a car parking on the street several floors down). Squeek! And he gone!” The poorly-conjugated English subtitles lend to the charm of the irreverent narrator who soon introduces himself. “Marcin Rzepnikowski, your main character of the movie”, he says as he turns the camera onto his face in a type of “video selfie”. Marcin, 22, is the author of the letter “Dear Karol”, “the main character” (as he says), and the narrator of the film.

Marcin explains his lifestyle to the viewer as the camera follows him through his daily routines. He searches for metal in a dumpster while smoking a cigarette and shows off a faucet he found – he’ll be paid by the kilo for it. “Would you have the courage for wandering like this? I doubt. Maybe if you was in a situation like me. Or maybe you’d be steeling?” Good question. Marcin comments on how people look at him and what they think, knowing that he is young and unemployed.

The second half of the film explores Marcin’s past. Marcin takes us to the children’s home where he lived for thirteen years. We meet his friend Richard, who Marcin refers to as a father figure, his father’s grave, and someone that Marcin calls “my friend MOM”. Whether the woman is really his mother or not is ambiguous. Yet Marcin’s feelings and concerns are not. In eleven and a half minutes, he becomes more than a familiar face, he becomes someone that the spectator knows.

Kawaler (The Single) opens onto what looks to be a perfume or jewelry advertisement. A woman in a wedding dress runs down a pier as her fiancé or new husband marches behind her, smiling indulgently as she blows him kisses. They kiss, run off the pier together, and are greeted by applause by their friends. One member of the crowd turns around, and turns out to be a television presenter with a microphone: “Is it a dream? Or a just a vision of love that cannot be real? It’s all possible and Married TV proves that it’s not difficult”. As the camera pans from the television screen to the family watching, the spectator may expect a short film that deftly breaks down the expectations and stereotypes that go along with ideas of marriage and love. This is, unfortunately, not the case.

The family watching TV is Rafal, his fiancée, and his fiancée’s parents. They discuss the upcoming marriage and the young couple seems embarrassed but excited. Rafal is soon whisked off by some colleagues to his bachelor party, which will constitute the majority of this short film. From fake warfare in the underbrush, to overbearing unsympathetic “friends”, to jokes about his (lacking) masculinity or virility, to a dimly lit whorehouse, the bachelor party scenes regurgitate every cliché of a bachelor party known to man. Men are reified as beasts that bond by undermining the confidence of the scapegoat and who have insatiable lust for violence, alcohol, and anonymous sex. The sensitive man is physically and emotionally destroyed. He tries to go back to his fiancé and her family but their reunion is tainted by his new doubts – which we don’t need to imagine since they’ve been made explicit by the first advertising scene in the film. Despite the clichés, the camera does wonders as it follows the men through the forest and into a whorehouse. It is only a pity that the script is not up to the same level as the camerawork. 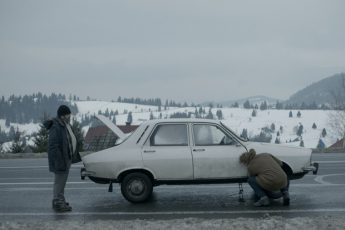