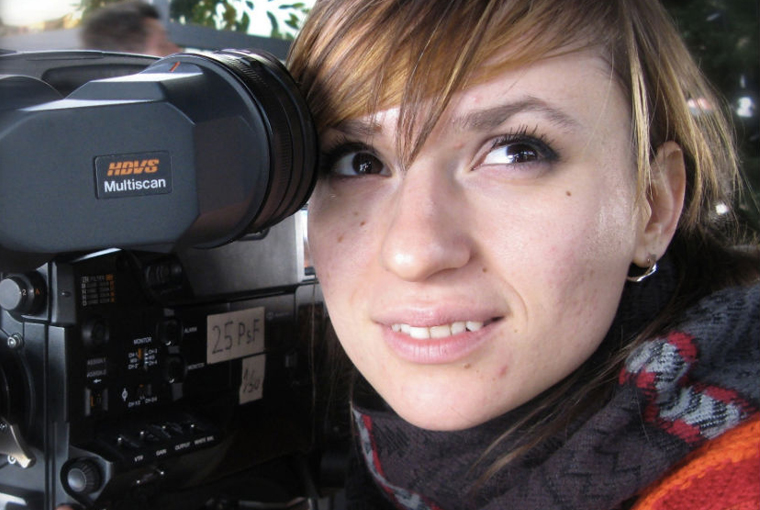 Zoe Aiano met up with Bojana Burnać to speak to her about her documentary on free diving. Burnać, a free diver herself, speaks about her background in the sport, the film’s making, and its aesthetics.

I understand you were already free diving yourself before making the film. At what point did you decide that you wanted to make a documentary out of your personal interest?

I made the decision when I was in my first competition as a free diver and when I saw what it looks like. I started training because I was shooting a feature narrative film and there was an underwater scene, so I decided to do it by myself because otherwise you have to hire an underwater cinematographer with a license. One condition was that I had to compete, because I was training with professionals. My first competition looked like this – there was a pool and free divers were coming into the water and zombies were coming out. They literally all had blackouts. There were 33 divers and they almost all had blackouts, and I was thinking “OK, this is not normal, this is not something people usually do in their daily life. We don’t just blackout!” So I started to think about what is happening and why these people are doing this. And then I researched the subject for one year, thinking about how I wanted to make this film. After a year of researching and observing all the free divers in Croatia and free divers from elsewhere in the world, I made the decision that my film would be about Goran.

Did he need to be convinced to take part?

Goran accepted immediately. At that time, he was not the world record holder and I told him that I wasn’t interested in his sports results. For me, it was kind of a risk, because I didn’t know anything about him. We were training together, but, as you can see from the film, Goran is very introverted. From my experience of working with people in other documentaries, I learned that this strong drive always comes from some kind of loss, and so I was interested in what Goran’s story was. And it was worth it. I found out and it was worth it. I was shooting with him for five years, because I wanted to make an intimate portrait of him and I wanted to include his intimate story, and I wanted to give him time to go through that process.

It also comes through the film very strongly that his life is centered on breath hold at the expense of everything else. Was it difficult then for you to enter and integrate in his world?

No, but I don’t know how it was for Goran. We were talking a lot about everything we were doing, but I never asked him if it was difficult for him or how difficult it was. I think it was difficult though, because for the first time in his life he was sharing this intimate story.

We also see him in quite intimate moments and moments where he disappoints himself and becomes frustrated. How did he feel about these parts being included?

Now he’s very happy with the film and with everything. I mean, Goran is a person who doesn’t compromise with anything or anyone. He is always searching for perfection. I could be there only with the camera, and that’s one of the reasons why the camera is so observational, because it was the only way to be next to him.

You took a very specific approach to the topic, and you could have gone a lot of other ways. Was that something you knew you wanted to do at the beginning or did it develop over time?

I knew from the beginning, because this film also came from my subjective experience and my subjective point of view, and I think this is key for this film. Most of this film and all the ideas behind it came during training. I was training together with Goran – we had the same coach – and I knew that it was the only way I could reach him. Because if you don’t know which questions to ask, you won’t get the answers from a free diver. This is obvious from other films about free divers, because they are all kind of introverted and breath hold is such a specific experience that you cannot have any idea about it if you didn’t experience for yourself.

Another thing that is shown shown very well in the film is this normalization of things that would be completely bizarre for other people.

Exactly, and that is still very interesting for me today. Even now that I’ve finished the film, I still cannot believe what we are doing. It is bizarre.

So you’re somehow between the two worlds, and see it from both sides.

Well, you know I was always trying to answer the question and articulate “why?”. Why am I doing this? Why do I like it? What sense does it make? Does it make any sense? Is it absurd? Is it not absurd? What is it? Somehow, every time I think I’ve found the answer, things become totally irrational. The explanations would just slip through my fingers, like I couldn’t catch hold of any rational reason why I like it. It seems totally irrational, but it also seems right.

But you’re continuing to free dive?

Absolutely, I mean I think this is one of the most important experiences of my life, because I learned so much about it and I learned so much about myself. During breath hold you cannot hide anything from yourself, because everything comes to the surface. Your body is fighting to breathe, you feel like you’re choking but then you say to yourself, “it’s fine, everything is fine. Just relax, it’s just a physiological change that will go away in a few seconds or in a minute, something like that.”

I’m curious as to what your next topic will be, since this has been such an intense experience and such a big part of your life. I wonder what could possibly follow. Could you face another five years like that?

Yes, absolutely, because every film is like that for me. I’m a director of photography and I have a lot of films behind me, and the process of shooting for five years is completely normal for me. An in terms of the intensity, making a documentary is taking part of your health, but I think what comes after it makes it worth everything. And that’s why I would do it again.

I liked that you choose not to structure the film around preparations for particular competitions, which would have been a very easy way to do it. There are several competitions and it’s all just part of what he does.

Yes, and I didn’t want to put any special attention on what competition it was. The only scene of voice over we have in the film, when he’s talking about himself as an “alpha” and saying that he wants to be the only one in the universe, is what gives the context about what kind of a condition he is in.

And the out of water preparations also seem almost as important.

Absolutely, a free diver prepares himself for almost a year just for one dive. That’s it. And that dive takes three to four minutes, so when he’s diving to a depth of 110 meters, it takes like three and a half minutes, and he’s training the whole year for that.

The Q&A I attended was very focused on technique, which I wasn’t totally surprised about since the film gives you a strong impression about what breath hold is but it leaves you with a lot of questions too.

Yes, that was my intention. There is not a lot of information in the film about what is happening. Apnoea is actually all about training the brain. And to train the brain we need to know everything about the physiology. So to go into that level of detail would be pointless. I don’t know who would understand it. I mean, there is so much medical terminology. For me, it was more important to raise questions, especially because of the ethics and morals of this sport. Anyone who is interested in it can easily find the answers they want on Google.

This is also one of the great challenges of poetic documentary – how do you include information in a way that doesn’t ruin the atmosphere and the rhythm?

Yes, and for me the rhythm was the most important. I had this information included in the rough cut, explaining what was happening, but then I realized that this explanation actually doesn’t mean anything to anyone. So I just cut it out and the rhythm became much better. It was also a big challenge for me to try to make a kind of standard. I think that the structure of the film is very simple actually, and it begins in a way that’s like the typical way students make film exercises. It also reminds me of some old films from the 1960s and 1970s, from Socialism when the industry was growing in this part of Europe. You know how it would always start – you have some protagonist who is being followed. The person wakes up, they make coffee and then they go to work. And then you see them at the factory, and things like that – you know these kind of movies from Socialism. I chose this way and this beginning of the film because in a way everything seems normal, but nothing is actually normal. In the first scene he’s sleeping, but he’s sleeping in a tent. He has a tent, a hypoxic tent on his bed. And then he’s going to work, and his job is to hold his breath for 23 minutes. So everything looks normal, but actually nothing is normal. 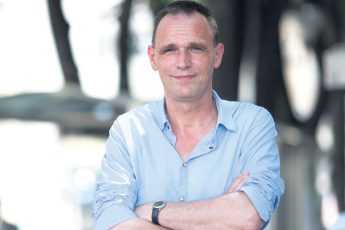