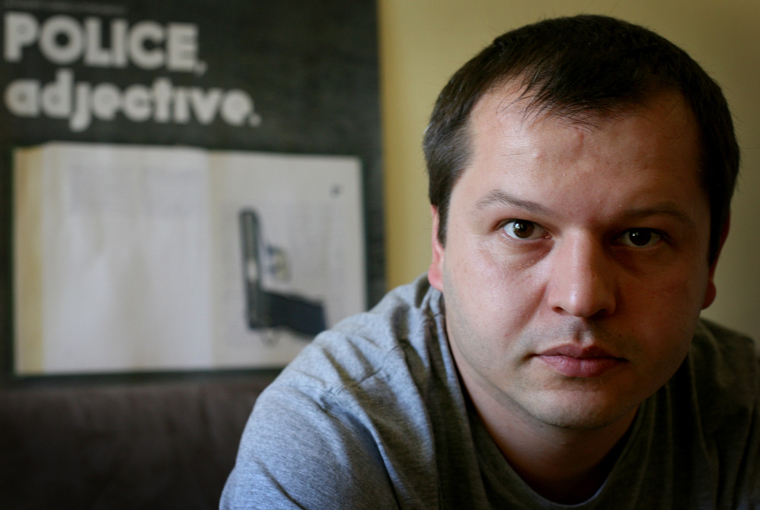 We met Romanian director Corneliu Porumboiu during the 3rd Syros International Film Festival, which hosted a full retrospective of his work. On the occasion of the screening of his last film, “The Treasure” (Un Certain Talent award in Cannes), Porumboiu speaks about locations, his relationship to Burcharest, and the larger perspective of his work.

Syros IFF’s main thematic umbrella is Khora / Cinemas of Place, which alludes to the different meanings places can have in cinema. How do you select your filming locations and how do you approach your ‘cinematic’ spaces?

Sometimes I first write the script and then go for location scouting, some other times I have a specific place in my mind. When shooting my first two movies, it was much simpler for me in a way: I knew very well what was happening in my home town, so I knew what kind of sensations would be associated with its different parts. In my first two movies and the shorts, we can see buildings built in the 80s that are very geometric, I like the formalism of these spaces. In Police, Adjective, the city is supposed to be a labyrinth where the hero hides, so I chose different forms, different parts of the city, mostly downtown ones. I like Bucharest and its diversity, I like the fact that you can see an old building next to a skyscraper. However, I don’t know it that well, so I feel more comfortable with shooting at night, when I can reconstruct this impression of mine in a filmic form. This is the reason why in Metabolism you don’t get to see much of it, you can only see the city from inside a car. I wanted to convey a feeling of claustrophobia, even when shooting in the restaurant, among other people. My intention was that the viewer could not see much of real life. As for my last feature, The Treasure, the plot is set in Bucharest, but my approach changed – you don’t see so many things happening in Bucharest, but there are many things happening in a garden in the countryside.

A sub-program of the festival is entitled ‘lands and locality’. How important is it for you to shoot in a familiar environment of your home country?

Every time I travel, I think of how I would shoot a location. There are cities that inspire me, places that inspire me, and others that mean nothing to me. There are cities that are very hard to film, at least for me. Paris or Los Angeles, for example, because they have their own imposed mise-en-scène. Rome is a very challenging place to shoot. Every city has its own type of scenography.

In all of your films, but particularly in 12:08 East of Bucharest, there is a wonderful juxtaposition of indoors and outdoors scenes which questions the limits of what is private and what is public. Does the way you work with actors change in relation to your locations?

Sometimes when I’m looking for spaces, I’m adapting what I had in mind, I change the mise-en-scène. We always discuss with the actors when we are on location. This is a way for me to detect how devoted they are in their roles and at the same time it is how I get inspired. Of course I think that we behave totally differently when we are out in the public, but at the same time, even in confined rooms, we are subjected to the gaze of the Other. So I tend ask actors to adapt the way they talk. It’s hard for me to describe it retrospectively, because every time my approach had to do with the subject. In 12:08 there was this situation where these people had to act and be heroes in front of the camera, and then they had to change their own profile and the way we see them. In The Second Game, I was speaking with my own father, but I got to see two versions of our conversation, with a 25 years gap.

In “The Second Game” you have the example of remediation, with the video tape playing a big part in the diegetic world. On the other hand, in the beginning of Metabolism the lead character/director talks about new digital media in a pessimistic tone. Do you endorse this pessimism? What are your thoughts on the transition from film to digital?

I always shot on 35mm, but only recently I realized I had to start experimenting in new formats – so, in reality, I am very interested in new media. Actually, in 12:08, I was thinking of shooting the TV show scene on video, but then we decided with my DOP to stick to film – it was tricky in terms of transfer and the way our actors would appear on camera. I don’t regret this choice.

To what extent does the character in “Metabolism” resemble you? Are metabolism and the stomach aches a metaphor for creative anxiety?

It all began as a joke… Some friends from the industry noted that everyone in the audience would think the director is an alter ego of mine. But why not, they can think whatever they like! I never thought of these metaphors. The truth is that I was suffering from this kind of pain when I was 23-24. But then I started making movies…

In “Police, Adjective”, but also in “Metabolism” there are many scenes where the protagonists eat over the same table. What is the importance of these scenes?

We are what we eat. I wish to leave the body language speak for itself in order to capture the way in which the body interacts with the spirit, in this schizophrenic condition of filmmaking.