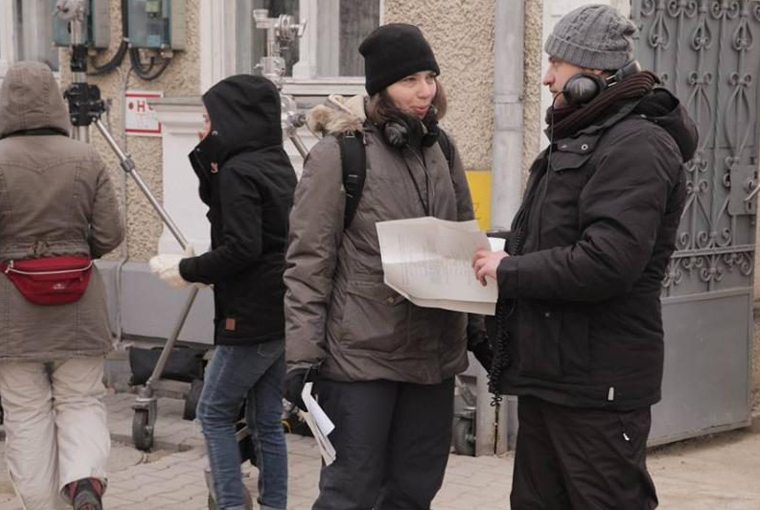 Cristi Iftime presented his short film “15th of July” at the Berlinale Shorts section of the Berlinale. We met with him and Anca Buja, the screenwriter for the film, to speak to them about the Romanian New Wave and the role of rituals in their film…


Tell me about your film. Where is it set, what’s it about?

Anca: It’s set in Romania. It’s about the relationship between four people, mainly between a daughter and her father.
Cristi: This particular relationship is a bit difficult because they haven’t seen each other very often over the last twenty years, because her father and mother are divorced so she is in a situation where she has to keep visiting her father. Even though actually this is just to complete a ritual. She has to see her father once in a while, but because they don’t really communicate, they don’t even really know each other. Every time she sees him their converstaion is empty.

In what way is this meeting a ritual?

Cristi: In the same way that we all go back to visit our parents once in a while. Usually this meeting is full of meaning, full of sense. But in this case, because of the difficulties caused by the divorce, they haven’t seen each other very much. This ritual has become a habit which repeats itself every year, it’s circular and there’s no real closeness between the two.

Why does she need to visit her father?

Anca: It’s his birthday, hence the title of the film, the father’s birthday is on the 15th of July. The main character and her boyfriend went to her hometown in Brasov to spend the weekend. They go to visit her mother and she chooses to visit her father on the way to say hello and happy birthday. She finds him in a very unusual situation, he is at his mother’s and he is working, laying down floor tiles. He is embarrassed. He just had a fight with his wife, who is fixing his mother’s bathroom.

Cristi: This film I made is not very easy to sum up. It’s based on some kind of lack of communication in the dialogue. They are talking but they’re not really talking.

Does she wish she could be closer to her father?

Cristi: Yes, everybody wishes they could have better relationships. They see each other quite rarely, they are not part of each others lives. If people don’t see each other for a long time they disappear from each others lives, they have to make up for all the years they lost. The situation becomes embarrassing. Time is lost. This is the atmosphere.

Why did you want to make a short film?

Cristi: It’s part of my university course. It’s a slice of life, you get all the information about the characters just through these short events. The structure of the film is basic, at the beginning the two youngsters arrive by car, then there is the visit.

I have heard your films described as minimalist, would you agree with this affirmation?

Cristi: Maybe they are minimalist in the way that they are showing small situations. I try to say a lot through these situations and to work a lot in detail. Less is more, this is what I believe in right now. Because of this, the cinematographic means I use and the language I use cannot be maximalist, since we are dealing with situations like four people in a room, it wouldn’t be fit to use a great number of different camera angles for example. These small situations say a lot about human character.

Would you like your films to be considered as part of the Romanian New Wave?

Cristi: It’s not a question of wanting. I believe in an organic evolution of cinema in certain parts of the world. I’m very interested in the new wave because I feel close to it, in terms of subjects and they portray the same society as I live in. I wouldn’t like to import cinematic styles from America or other such places because I believe there is an organic link with the individual and the place where he or she lives. North Americans see the world a little bit differently from East Europeans so it wouldn’t be fair for me to make cinema that is not very linked to where I live. I try not to be labelled. I try to find my own way in the cinema, I think it’s very important to start from what you see around you in Romania and maybe starting from this and the new wave you can make something good which is your own. I believe in evolution rather than revolution.

Do you think Romanian society is changing quickly?

Cristi: We are still not entirely occidental, but we aren’t communist anymore. We’re still going through a transition period, I think this is an advantage for cinema. A society full of contradictions. Oppositions and contradictions are very useful for cinema. It’s a moving society. It’s not changing fast but it’s in the process of changing.

How do you direct your actors?

Cristi: This was the hardest thing, to work with the actors because they have to seem like they are very much in control, everything is ok. But on a second level there is emptiness. The characters use formulas and clichés. The father asks “Do you have an employment contract?”. The daughter replies “No but I’ll get one soon” and he says “I asked you six months ago and you didn’t have one then either”. It’s just empty talk. He doesn’t know what shes really doing, what she really feels, and she doesn’t know about him or his state of mind either. With the actors, I try to decompose their role, and try to understand why such actor says such line.

Anca: Cristi is working in great detail with the actors.

Cristi: When you take care of every detail to such an extent, the work takes a long time even though the final product is short. The film lasts about twelve minutes.

Are you working on any more projects?

Cristi: This selection for the Berlinale was great news and I was concentrating on working on the script until now. I’ve finished four years of studies, now I have to make another short film for my Masters at the University of Bucharest.

Is this a personal story?

Cristi: Every film should be personal. When you see the film maybe you’ll think about your father too, I don’t know.